Warlingham is a large village on the south-eastern boundary of London. Warlingham is centred on a triangular village green, home to most of the village's commercial activities. Most of Warlingham's populace works in Croydon or central London, making Warlingham part of the London commuter belt. Tony Lavin of Brisbane Australia worked at the White Lion 1983-1984 and wonders "What happened to Alan's sweet shop? Love to hear from anybody that we met during our enjoyable time at Warlingham" (found this on the net - Ed). 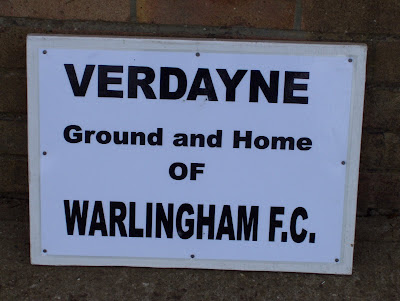 I travelled via London Victoria and East Croydon to Upper Warlingham station, from where I walked (mostly uphill) to Warlingham village. It was a very steep climb and brought back memories of a similar experience walking to neighbouring Farleigh Rovers many years back. I would estimate this trek lasted 30-35 minutes but it was at altitude. It is fair to say that Verdayne Playing Fields is a very basic venue. The clubhouse/changing rooms building is the only permanent structure. The Pieman understands that Warlingham are looking for promotion to the Premier Division and if successful will groundshare at Croydon Athletic next season. The long term aim is to develop their own facilities, to the required standard, in Warlingham. 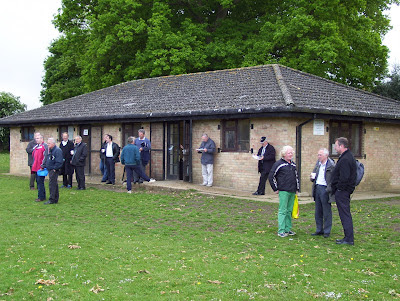 Following on from the late drama in the Horley Town v Sheerwater match on Saturday, there were a number of scenarios that could determine the destination of the Combined Counties League Division One Championship this season. Tonight's fixture was to have a big say on the issue. 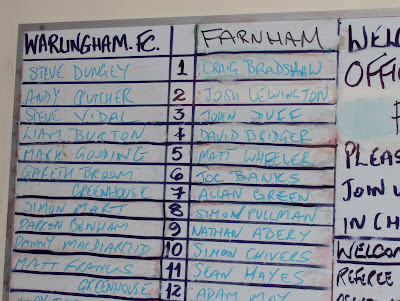 Scenario 1: Visitors Farnham Town (88 points from 39 matches) were in Pole Position going into this, their final, match. A win tonight would guarantee them the title. Anything less than a win could invoke Scenario 2: a win for Horley Town (87 from 39) at Farleigh Rovers tonight would see them finish ahead of Farnham on points and probably win the championship. I say probably because Scenario 3: tonight's hosts Warlingham (75 from 35) could, if they won all FIVE of the remaining matches finish ahead of both Farnham and Horley. If both Horley and Warlingham had won tonight then goal difference would come into the equation. Before tonight it was +73 opposed to +55 in Horley's favour. I guess five wins could make it tight. Scenario 4: involves Worcester Park FC (already completed their fixtures 88 from 40) who could also win the title if both Farnham lose, Horley fail to win and Warlingham fail to win at least four and draw the fifth of their five remaining fixtures. If Warlingham finish on the same points as Farnham (possible if tonight's match is drawn) then again goal difference could decide the title, but only if Horley fail to win at Farleigh tonight!
Clear? 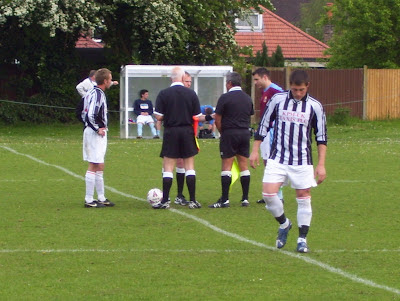 Farnham Town started the match positively and following an early injury to the Warlingham keeper, were comfortably 2-0 ahead. However Warlingham played some fine football themselves and were rewarded with a goal just before the interval. The home side dominated the majority of the second period and deservedly levelled with about 10 minutes remaining. A red card per team and a missed penalty by the home side merely added to the entertainment. At the final whistle the Farnham team began to celebrate as the news came through that Horley had drawn 1-1 at Farleigh Rovers. This point had therefore been enough to ensure the championship for Farnham. I immediately reflected on that late penalty miss by Warlingham. If it had been converted Horley would have overhauled Farnham on goal difference and of course going back to the late Sheerwater recovery at Horley on Saturday, Horley will be regretting not capitalising on their dominance of that match. It just shows how thin that line between success and failure in football can be. 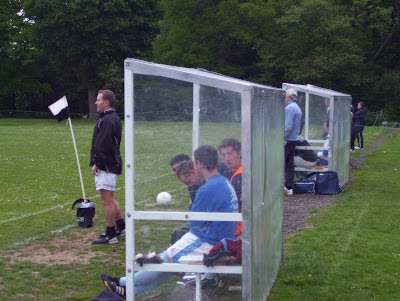 Warlingham now have three fixtures remaining (the league will meet to discuss the 4th outstanding fixture, caused when opponents Merrow failed to turn up last week) and a maximum 12 points (they will get 3 from the Merrow fixture) would see them end on 88 points like Worcester Park and Horley Town. This would mean that the top four sides would be separated by just one point!

After the match (a 7pm KO) I was able to catch a 403 bus at 21:07 (the 20:52 was either early or cancelled) back to Croydon (Fairfield Halls), a Thameslink service (21:32) to London Bridge, the 21:58 from Liverpool Street to Cheshunt and was home for 22:40. The bus from Warlingham is by far the better option as the mountainous route from the local station is a bit of a trek ('Aye but it twer a grand ride down agen' - Ed). 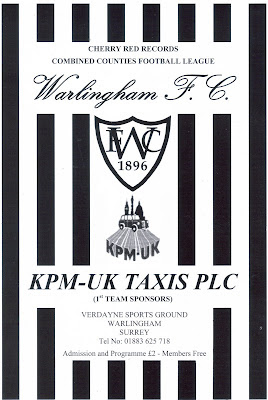