Dublin is the capital of and largest city in Ireland, near the midpoint of Ireland's east coast, at the mouth of the River Liffey and at the centre of the Dublin Region. Founded as a centre of Viking settlement, the city has been Ireland's capital since medieval times. Dublin was the scene of some of the most severe fighting of the Irish rebellion of 1916 and of the revolution of 1919 to 1921, which resulted in the establishment of the Irish Free State. After Independence Dublin became the political, economic, and cultural centre of Ireland. The location of the Government of Ireland, Dail Eireann, assembles in Leinster House. Dublin. St Patrick's Athletic F.C. was founded in 1929. The first season was played in Phoenix Park but in 1930 St Pats moved to Richmond Park. Although home matches have been staged at other venues during a couple of periods over the years, Richmond Park has remained their spiriitual home. It is situated in the Dublin suburb of Inchicore. The area where the ground now stands was formerly used as a recreational area by the British Army, who were stationed at the nearby Richmond Barracks, hence the name. This was the Pieman's first trip to Dublin since July 1991 when seeing Spurs play Shelbourne at Tolka Park. A cheap deal on Ryanair from Stansted assisted in getting me to the Emerald Isle. We travelled by local bus from Dublin Airport to the Drumcondra area where we were staying. Having checked into our accommodation, we headed off into town for some liquid refreshment. The Pieman can confirm that “the Guinness was good” Richmond Park is an easy venue to reach with regular bus services passing the ground. We opted to catch the tram service (Luas) from the city centre, alighting at Goldenbridge (5 minutes walk from the ground). We also took advantage of the Marble Arch pub, just across the road from Goldenbridge tram stop, where some more Guinness was consumed. Likewise a pub opposite the ground offered a similar opportunity. The Richmond Park ground is clearly one with a lot of history behind it. We sat in the Main Stand from where the view is very good but the legroom could be better. Behind one goal (Shed End) is a part covered terrace. Opposite the Main Stand is The Camac terrace, running the full length of the pitch but split in the middle by the TV gantry. The Inchicore End contains a limited standing but is not banked. The match was settled by a first half goal from local lad, Robbie Keane. It is difficult to read too much into these friendly matches but hopefully St Pat's will have gained something from the experience and with their UEFA Cup season starting next week this might be timely. Spurs now move on to a 3 match tour of South Africa in preparation for the season ahead. 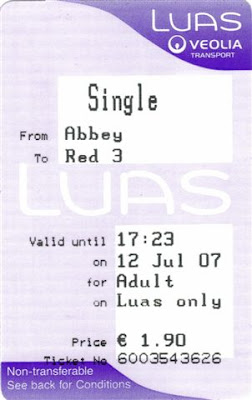