Sudbury’s history dates back into the age of the Saxons. The town is also mentioned in the Doomsday Book of 1086, as a market town where the local people came to barter their goods. The weaving and silk industries prospered for centuries during the Late Middle Ages. During the eighteenth century Sudbury became famous for its local artists. John Constable painted in the area, especially the River Stour. Painter Thomas Gainsborough was born in Sudbury in 1727, and was educated at Grammar School. His birthplace, now named Gainsborough House, is now a museum to his work and is open to the public. It houses many valuable pictures and some of his family possessions. A statue of Gainsborough was unveiled in the town centre outside St Peter’s Church on Market Hill in 1913. A.F.C. Sudbury was formed on 1 June 1999 by the amalgamation of the town's two previous clubs, Sudbury Town (founded 1885) and Sudbury Wanderers (founded 1958) the process giving rise to the name Amalgamated Football Club Sudbury (A lot more original than all these other AFC clubs that keep appearing - Ed). Their home ground is the King's Marsh Stadium where Sudbury Wanderers were based prior to the Amalgamation. This Pieman was fortunate to have visited the Priory Stadium, home of Sudbury Town FC, back in February 1996 for their FA Trophy, 1st Round, 3rd Replay with Trowbridge Town. 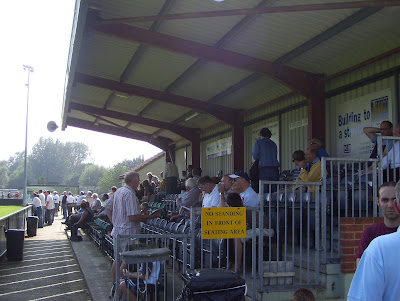 A car journey to Sudbury saw an arrive in the Suffolk town around mid-day. The excursion via the A120 and Halstead, where what appeared to be an annual flower festival, had really enhanced the already fine High Street. We lunched at Grover & Allen, the local Wetherspoon outlet, where this Pieman delighted in a pint of White Adder from a local Sudbury brewery, Mauldons. 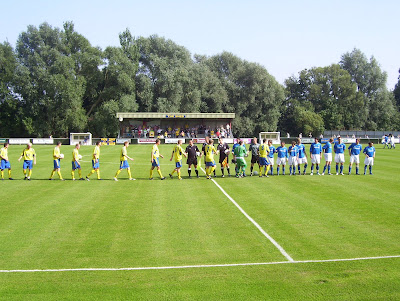 After a brief shopping interlude, it was time to attend the Preliminary Round tie between AFC Sudbury and Lowestfoft Town. Although dropped off at the ground, I would estimate that a 25-30 minute walk from Sudbury railway station would get you to the ground. 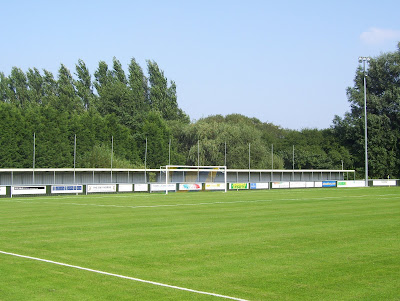 The stadium is impressive with both ends being covered. Likewise the seated stand along one side and the substantial terraced area opposite. It is within in this area that the more vociferous element of the home support congregate. On this occasion a large number had turned up in fancy dress, as it was an FA Cup-tie! 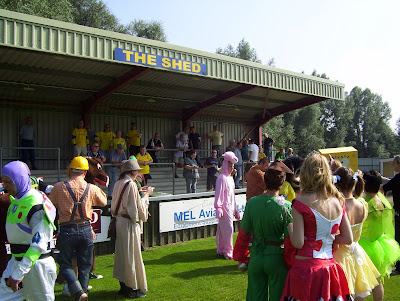 The match burst into life early on with the visitors taking the lead. The Golden Goal announcement timed Dale Cockrill’s strike at 1 minute and 34 seconds. The visitors continued to force the play after this but gradually, AFC Sudbury eased their way back into contention. Chances came and went for both sides until a mighty roar greeted the home side’s equaliser in the 86th minute. Ollie Blackwell’s strike, following a corner, earned the home side a replay and a trip up the A12 to Lowestoft’s Crown Meadow. 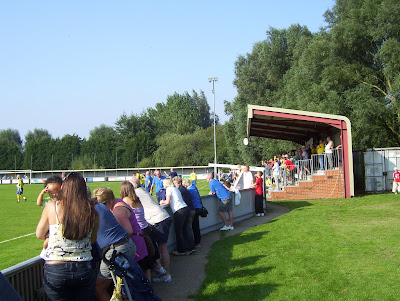 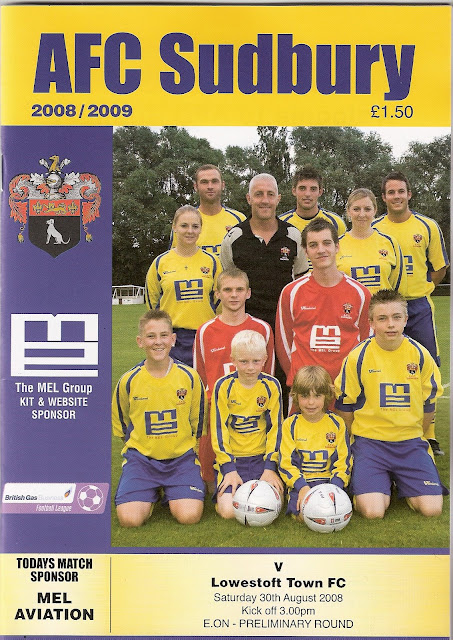