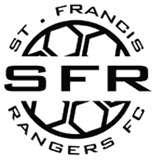 St Francis Rangers FC was formed in 2002, following the amalgamation of St Francis (St Francis Hospital until 1999), and Ansty Rangers (Lindfield Rangers until 1996). The club is based at the Colwell Ground, within the sprawling grounds of The Princess Royal Hospital, Haywards Heath. Reference is made in the club match programme to St Francis Hospital FC being known as the 'Mental Hospital' in earlier years. St Francis Psychiatric Hospital, Haywards Heath, West Sussex opened its doors to patients for the first time in 1859. 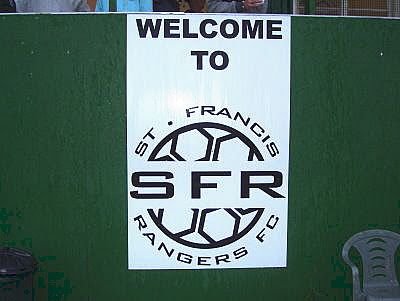 Built to house 400 patients at a cost of £46, 531, 16s. and 10d, it carried on its work uninterrupted for 136 years until November 1995, when it closed to make way for modern advances in the community based care of the mentally ill. One local website claims that "the whole complex has been converted into yuppie-style condominiums for people with BMWs". Not sure about this but the imposing building is an immense feature when visiting this ground. This Friday evening fixture was an attractive proposition, but severe adverse weather, with heavy rain sweeping in from the west was always at the back of my mind as I contemplated travelling to Sussex. A couple of afternoon phone calls to the Fixtures Secretary confirmed that the match was going ahead and so I made my way over to London Bridge in order to catch a direct service to Haywards Heath. 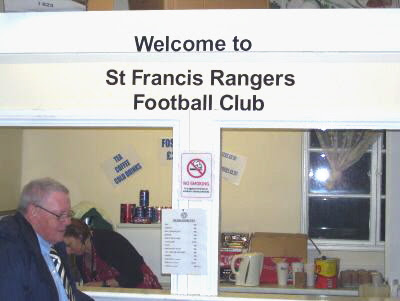 It only takes 20 minutes to reach the hospital complex on foot from Haywards Heath station but, if like me, you are on unfamiliar territory, it may take half as long again to find the Colwell Ground. En route you will pass the St Francis Social Club, where I spied Harveys Sussex Best Bitter on handpump when seeking directions. Hot food is also available here and the football club invites visitors back to these premises for hospitality after matches. On arrival at the gate I was greeted by a couple of club officials including Gary Lomas, Commercial Manager. I was made to feel very welcome and even offered a lift back to the station after the match. It is clear that St Francis Rangers is a club that truly appreciates visitors. You enter the ground down a narrow track, bringing you to the car park and clubhouse building. This structure houses the changing facilities and upstairs the refreshment room. Hot food (burgers, chips) and draught lager complimented by tea, coffee and confectionery. 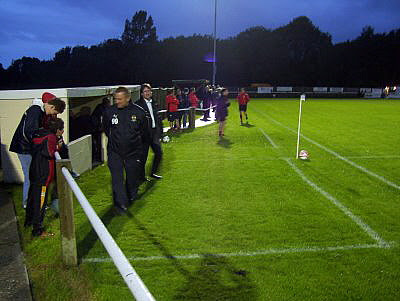 This was the first home fixture of the season due to the club sharing facilities with cricket. However, they had won 3 out of their 4 league fixtures away from home and a cup-tie. The only blip being a 2-0 reverse at Wick in the previous match. There is a considerable slope on the pitch, which must have aided the drainage on an extremely wet day. So much so that there was no standing water on the pitch on a day when much of Britain was suffering flash floods. This said the Pieman was grateful for the covered standing area along the side of the pitch. At times the rain was almost horizontal as it blew in across the playing area making it very hard for the teams to play structured football. 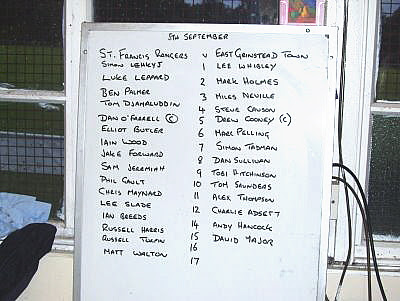 But play they did and it is a credit to both teams that they tried to play a positive game in such conditions. East Grinstead Town will be disappointed not to have done better with the chances that came their way whereas the home side were confident in their finishing. Their 4 goals coming from Jake Forward, a brace from Chris Maynard and when the keeper lost the ball from a corner, a strike by Russell Turpin (Highway Robbery? – Ed). The visitors claimed a late consolation through an own goal by Luke Leppard. Fellow hopper Nick from Richmond (thanks Nick) kindly gave me a lift back to the station and amazingly I was able to catch the 21.46 back to London Bridge enabling me to be back home in Cheshunt before midnight. 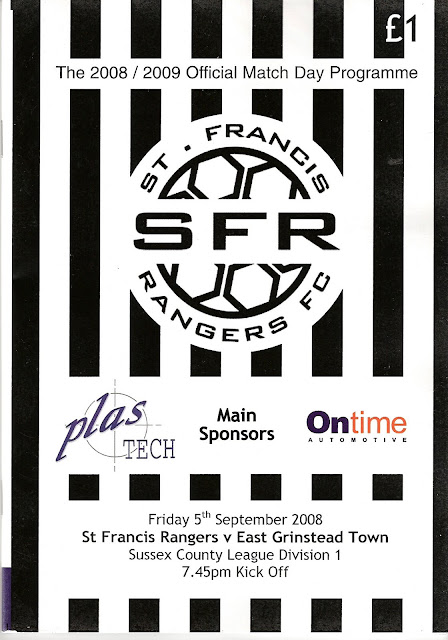