The city now named Stoke-on-Trent was officially born on the 31st March 1910, with the Federation of the Six Towns. This brought together the boroughs of Hanley, Burslem, Longton and Stoke, together with the districts of Tunstall and Fenton. Stoke was chosen as the seat of power, despite the fact that Hanley, and indeed Burslem, had been far better established since Edwardian times. The legacy of this union lives on undiminished, as locals will refer to 'the Potteries', meaning the various towns, rather than the official title of 'Stoke-on-Trent'. The production of pottery dates back to at least the 17th century, and was founded on the area’s abundant supplies of clay; of salt and lead for glazing; and of coal, used to fire the kilns. By the time Josiah Wedgwood set up business for himself in 1759, the area was supplying a wide variety of earthenware and stoneware produced in and around the villages of the area. Pottery production was also in the process of changing from a cottage-based to a factory-based industry, a transformation that placed the Potteries at the forefront of the Industrial Revolution. 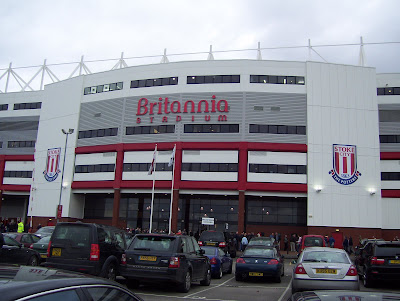 Founded in 1863, Stoke City FC is the second oldest professional football club after Notts County. Stoke play their home fixtures at the Britannia Stadium, a 28,000 all-seater stadium. The stadium was opened in 1997; prior to this date Stoke had played at the Victoria Ground, which had been their home ground since 1878. 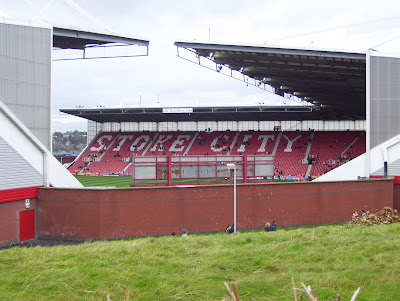 To avoid disrupted rail services from London Euston, this Pieman caught a train to Cambridge from where The Butler was driving. We reached Stoke in a little over 2 hours via the A14, M1 and A50. We already knew that parking was limited and difficult in the vicinity of the ground and therefore decided to backtrack a short way along the A50 coming off and heading into the Fenton district. This paid off as we soon found a Pay & Display car park (£3 all day Sunday).

Significantly we also found a public house – The Musician. Here we enjoyed a splendid Full English breakfast (£2.85 – Ed) cooked by John Bailey. This gentleman was a fine host and whilst enjoying his hospitality, he was able to tell us that as well as being a former Football League referee, he had also been a pop star in previous decades! He told that he was a member of The Fortunes, and that he also replaced Russ Abbott in the Black Abbotts! 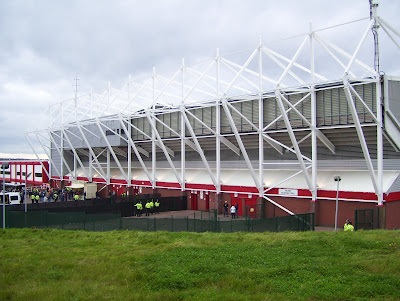 The Real McCoy or Walter Mitty? - Does it even matter as this was a day out in the soap opera that is Tottenham Hotspur and any light relief is extremely welcome? From the pub, a 20-minute stroll back over the A50 enabled us to reach the stadium. Like many new builds, this venue lacks the charm of the old Victoria Ground. However it meets all the current ground regulation criteria and the view afforded from my seat directly behind the goal was very good. 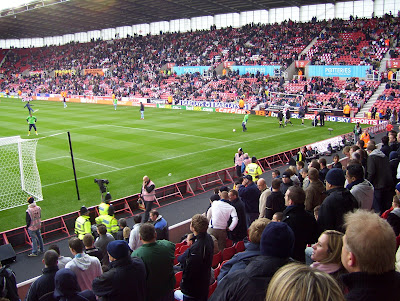 As for the match, the early dismissal of Bale and the resultant penalty, converted by Higginbotham, meant an uphill task for bottom of the table Spurs. Bent did level the scores before the break but Delap’s winner meant that Spurs had 2 points from a possible 24 (their worst ever start to a league season). 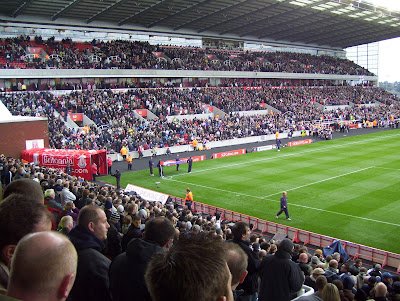 Whilst in the Entertainer pub, I got talking to one of the locals. The conversation drifted to the local delicacy, Oatcakes. This Pieman was informed in no uncertain terms that for the best results, one should pour pig fat rather than lard (always thought they were one and the same thing) on to the griddle! Parking in this vicinity really paid off for us and we were back at Cambridge station by 9pm. Not bad considering the 4pm kick off, 11 minutes of injury time and the walk to the car. 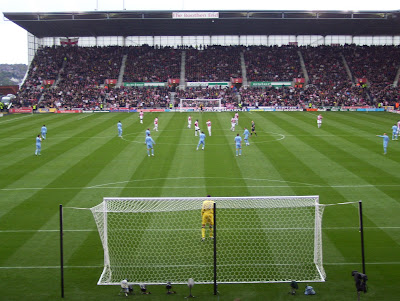 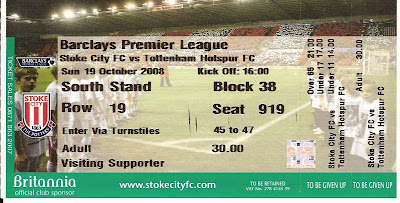 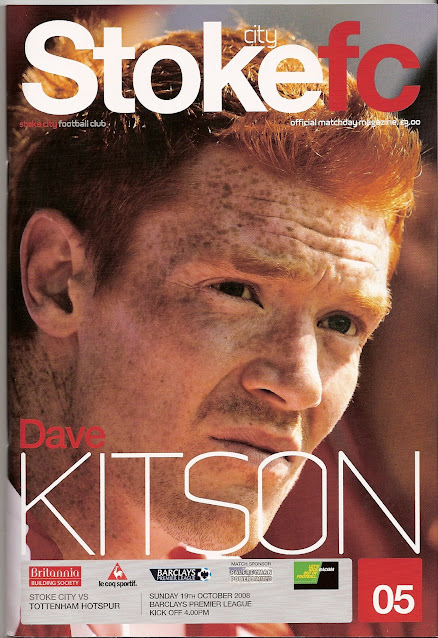