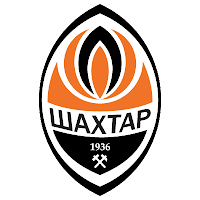 Donetsk is a large city in eastern Ukraine on the Kalmius River. Historically, it is the unofficial capital and largest city of the economic and cultural Donets Basin (Donbass) region. Donetsk was founded in 1869 when the Welsh businessman John Hughes built a steel plant and several coalmines in southern part of Russia at Aleksandrovka. The town initially was given the name Hughesovka (Yuzovka). By the beginning of the 20th century, Yuzovka had approximately 50,000 inhabitants and attained the status of a city in 1917. During Soviet times, the city's steel industry was expanded and it was renamed Stalino. During Nikita Khrushchev's second wave of de-stalinisation in November 1961, all Soviet cities named after Joseph Stalin were renamed, even though Stalino was named after its steel industry rather than Stalin himself, the name was changed to Donetsk, after the Seversky Donets river. 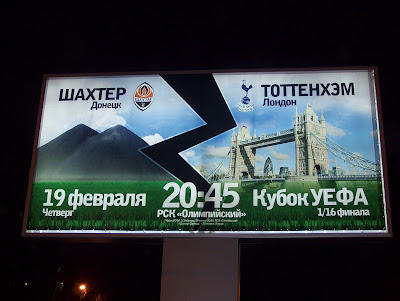 Today Donetsk is an administrative centre of Donetsk region of the Ukraine. It is a major industrial, scientific and cultural centre; an important node of railway, road and airlines. Nowadays city industrial enterprises cover one sixth of gross industrial output of Donetsk region. In Donetsk there are about 150 industrial enterprises and production amalgamations, over 150 construction associations, more than 2,000 establishments and organisations of other branches, employing about 550,000 people. Donetsk today boasts 3 theatres, a Philharmonic Society, a circus, a planetarium, 80 palaces of culture, clubs and movie-theatres, 29 museums and 500 libraries.

A 6am flight from Stansted, enabled us to reach the centre of Donetsk for early afternoon. The route in from the airport to the centre was rather bleak and appeared poverty stricken. I don’t think I have ever seen so many stray dogs in one place and some of the vehicles on the roads appeared to be held together by rust. Once in the centre though, the buildings took on a more traditional and prosperous appearance. As this was the day before the match, this afforded an opportunity to get our bearings and explore.

Shakhtar Donetsk FC has been playing most of its games at the RSK Olimpiyskiy Stadium. Work is progressing on a new stadium, Donbass Arena which will have a capacity of 50,000 and will be a used for Euro 2012 (jointly hosted by the Ukraine and Poland) Championship. Shakhtar's old home, the central Shakhtar Stadium which was built in 1936, and was reconstructed four times, is currently being used by FC Metalurg Donetsk. The Donbass Arena is just across the road from the RSK Olimpiyskiy Stadium and as can be seen, this will be an impressive arena. The previous venue is probably a 25-minute walk away from the other two sites and is located in the Central Scherbakov Park of Culture and Leisure. 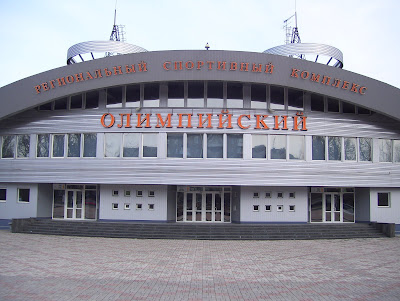 Armed with colleague Barry Peterson's Ukrainian phrase book (he was out there with Aberdeen at Dnipro previously - Ed). We set out to enjoy the cultural delights of Donetsk. For the duration of our visit, eating and drinking was a good experience. The local brews were good and the food in café/restaurants was of fine quality. As is often the way in Eastern Europe, the locals will eat sweet dessert type foods at any hour of the day (not just the locals – Ed) 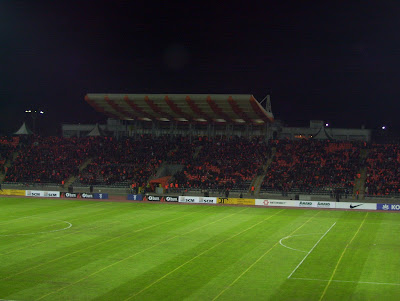 The RSK Olimpiyskiy Stadium has very little cover and it was a relief that the evening of the match was dry. However it was cold and watching football at –7 degrees will not be everyone’s cup of tea. Once again, it is unlikely that if this was an English Stadium, UEFA would probably deem it unfit to stage matches. Double standards yet again! Anyone wishing to use the toilet facilities during the match was escorted to very poor underground facilities shared with Donetsk fans – rant over. I had anticipated this chaos and elected for a pre match visit, which facilitated the acquisition of half a dozen complimentary Shakhtar Donetsk flags. However, this was all I got as Tottenham Hotspur did not approach the game in a positive way and despite looking likely for a 0-0, succumbed to two late strikes. A swiftish departure to the airport facilitated a quickish take off from Donetsk arriving back at Stansted at just after 2am on Friday morning. 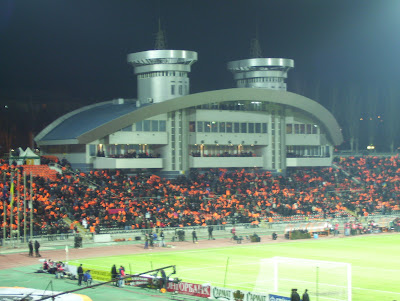 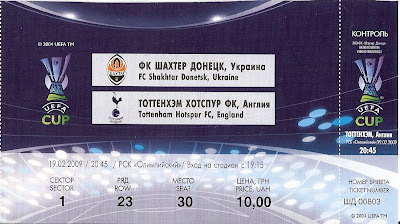 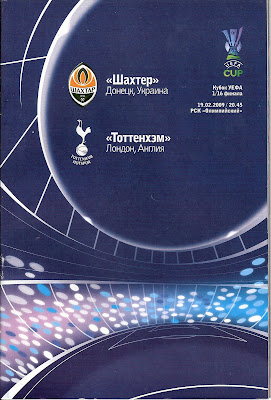 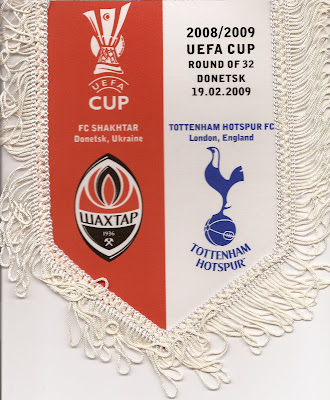 Attendance: 25,000
Admission: 10 hryvnia (less than £1 at current excange rates) or £5 if purchased from Tottenham Hotspur plc.
Programme: 28 pages - no price on cover. Very poorly distributed. Limited availabilty from club. Prices appeared to go up as the day progressed with street sellers asking 30 as opposed to 5/10 the initial price from club ticket kiosks. In all probabilty this publication was supposed to be a complimentary issue.