Takeley is a small village in Essex near Bishop's Stortford. When Takeley was first registered by the Normans in 1086/87 its boundaries were approximately 8 miles in length, with a total area of 3,000 acres. However, since the development of Stansted Airport, it has lost nearly a third of its land. Takeley consists of several Ends and Greens, namely Brewers End (Briars End), The Street, Smiths Green, Bambers Green (Bambrose Green), Molehill Green (Morrells Green), Mill End and Coopers End. Coopers End has since been demolished and the Cargo Area of the airport now stands on the ground once occupied by the settlement. The access to and from the airport at Coopers End was closed briefly in January 1991 but was re-opened in November of that year. Coopers End roundabout was developed during the construction of the new airport terminal and is placed just west of the Terminal. 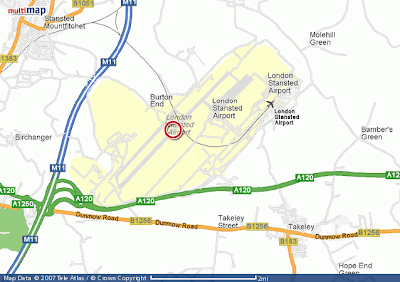 In the early hours of the previous day, this Pieman had landed at Stansted Airport on return from a UEFA Cup excursion to the Ukrainian city of Donetsk. Little over 24 hours later he was back in the vicinity, this time visiting the adjacent Essex village that is Takeley. This was not a first attempt at visiting the Station Road ground. An earlier excursion a few weeks previous had been thwarted by a late postponement due to frost. 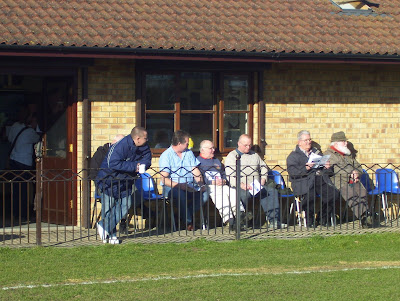 On that occasion, I was able to confirm that Stansted Airport is the nearest railway station. It takes around 25 minutes to walk from there to the centrally located ground. As you might surmise, there was once a nearer railway station – Takeley. Prior to the Beaching cuts, this station was on the now long gone line between Bishops Stortford and Braintree. The station building and platform are still there and are situated immediately behind the clubhouse building at Takeley FC. Regular bus services also connect Takeley with Bishops Stortford and Chelmsford.

For my second attempt at seeing a match at Takeley, I was offered a lift. We did not leave Cheshunt until after 2pm but a combination of the M25 and M11 ensured that we got to the ground in plenty of time. Parking at the ground is limited but alternative spaces are available across the road and this facility is clearly signposted. 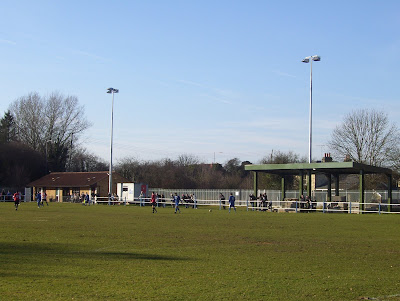 Clearly the club has taken great strides in recent times and is enjoying their first season in the Essex Senior League under experienced manager Don Watters with assistant and cabaret singer, Lol Williams. They are riding high in the division and will be looking to maintain a title challenge for the remainder of the season. 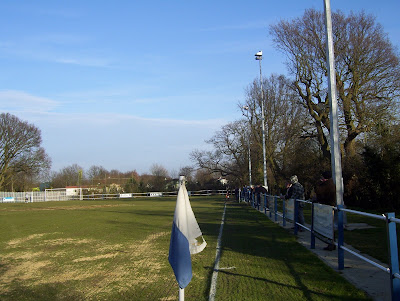 The Station Road ground is also steadily improving. A stand is taking shape on the side along from the clubhouse. The clubhouse complex is home to the changing facilities and the refreshment bar and appears to be a relatively new brick built structure. There is no licensed bar at the ground but visitors are invited to use the facilities at the nearby Takeley Sports and Social Club, situated behind the Silver Jubilee Hall. 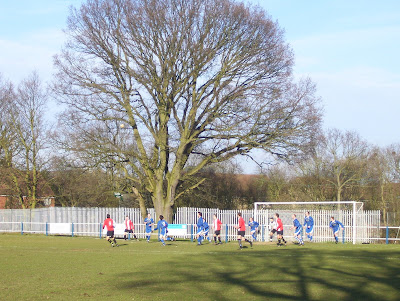 Although I tend not to watch matches in competitions such as this, I am really glad that I did on this occasion. Both the home side and visitors Hanworth Villa FC (Combined Counties League, Division One) are having good seasons in their respective leagues and I thought a decent match was in prospect. For a change, I got this right as a very good match ensued with both sides having spells on top. Some excellent defending and goalkeeping thwarted both. I can’t remember a match with so many telling last ditched tackles. 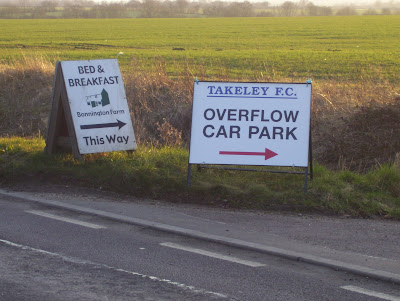 Extra time and even penalties would settle this tie if the stalemate remained unbroken, but eventually a superb instinctive strike by Steve Loveridge (recently rejoined from Egham Town - Ed) on 82 minutes, ensured the visitors took their place in the semi-final. A fine game between two evenly matched sides! We travelled home via Hatfield Broad Oak and Harlow arriving in Cheshunt at 17:30. 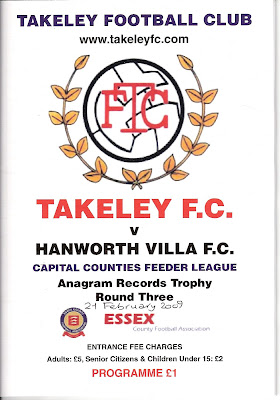