Hanworth lies to the south east of Feltham in the London Borough of Hounslow and the name is thought to come from the Anglo Saxon words “haen” and “worth”, meaning “small homestead”. In 1512 Hanworth came to the Crown and Henry VIII, who enjoyed hunting on the heath surrounding the village, gave the manor to Anne Boleyn for life. After her execution, the manor returned to the King who held it until his death in 1547, when it passed to his final wife Katherine Parr, who lived in the house with her stepdaughter Princess Elizabeth. When the princess became Queen she stayed at Hanworth Manor several times, often hunting on the heath. 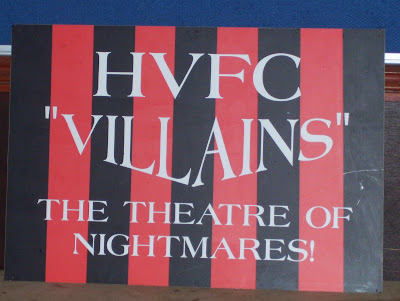 Hanworth Villa FC was formed in 1976 following a managerial disagreement at another long established Hanworth club. Since 1980 the club has had a 'nomadic' existence but in 1997 moved to its existing Headquarters at Rectory Meadow. The club was elected to Division One of the Combined Counties League in time for the start of the 2005/06 campaign. Two seasons later finishing in the runners up position, but promotion to the Premier Division was not allowed due the lack of the appropriate facilities. The necessary improvements, including floodlights and a 100 seater spectator stand, were in place ready for the start of the 2008/09 season. 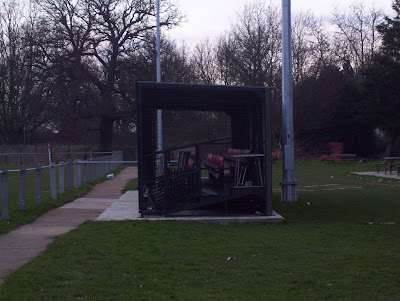 Having seen how well Hanworth Villa played at Takeley recently, I was inspired to visit Rectory Meadow for this midweek encounter with Knaphill. The nearest railway station is Feltham and it is a half hour walk from there. However there are numerous bus routes that criss-cross the area linking up with Feltham and other stations including Twickenham. 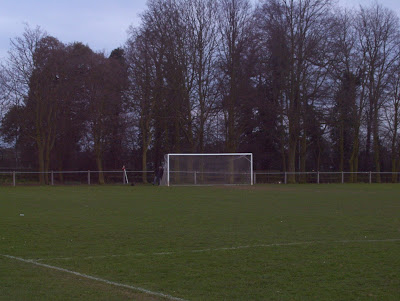 The main pitch at Rectory Meadow is enclosed with hardstanding along the main clubhouse side. On the side opposite where the dugouts are located there is what could best be describe as a cinder path running the full length. Behind one end, shielding the ground from the busy A316 is a wooded area. The 100 seat stand, although relatively new, was locked, not sure why. 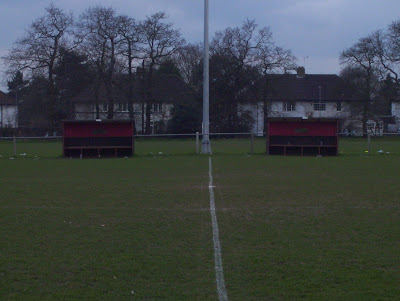 There was a bit of a local fixture clash on the night with the clubhouse showing Juventus v Chelsea on the big screen. A few stayed inside throughout to watch that. However, there was a decent number that ventured outside on a chilly but not too cold evening to watch a decent encounter between two sides riding high in the league. 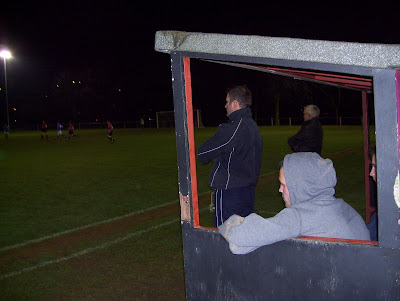 We were not disappointed. The home side took the lead half way through the first period when Steve Reddings chipped the visiting keeper from the edge of the box but it was not long before Knaphill drew level courtesy of a fine strike from Matt Baker. Shortly afterwards, Reddings added another quality goal to restore the lead for the Villains, this time with an instinctive lob. 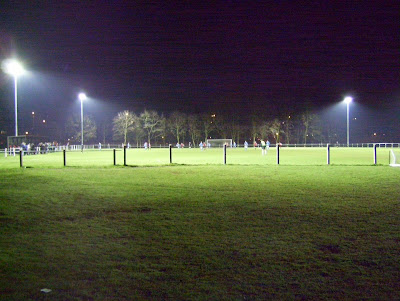 The second period was competitive throughout and Knaphill always looked as if they might grab a second goal. That said Hanworth are an impressive side and could have added to their tally. With time up on the 90 minutes this Pieman had made his way to the exit to ensure a swift getaway. There he was still able to witness a late shot from outside the box being allowed to slip through the keeper’s grasp and on to the post before being gleefully converted by Nick Darnell for Knaphill’s equaliser. So close for the home side who will have been ‘gutted’ – excellent entertainment for this neutral though! Back at Feltham Station in time for the 22:05 to Waterloo. 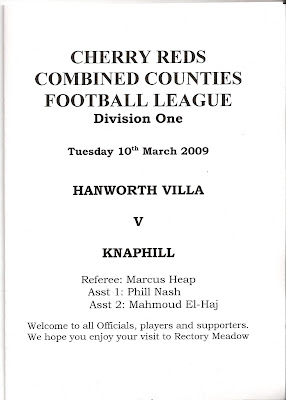