Holmesdale FC was originally formed in the 1920's and can be traced back to the Baptist Church in Holmesdale Road, South Norwood, where it was affiliated to the London FA and competed in the Excelsior Football League. After two years in the Excelsior Football league, the club moved to the Thornton Heath and District League where they finished second in the 3rd Division and won the Sportsmanship Cup. To play for the team in those days you had to be involved in the church, attend Bible class and pay match fees of 6d (2.5p) with a signing on fee of six shillings (30p). Sadly, in 1923, the team folded for a period of 33 years, before being resurrected in 1956 by the 3rd East Surrey Boys Brigade Company. They were pleased to inherit the original Post Office savings account of the predecessors which had funds of £7.00, but with 33 years interest had risen to the princely sum of £12.00. 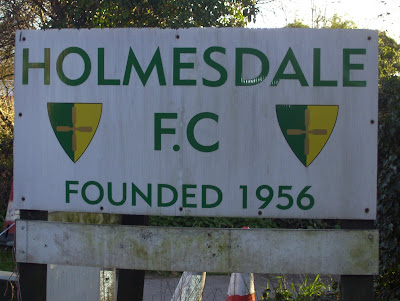 In 2000 part of Holmesdale FC moved to Oakley Road in Bromley, moving into the British Energy Kent County League. Since moving to Oakley Road the club has developed the facilities to boast a floodlit training area, a fully enclosed senior pitch with dugouts and a licensed bar with function hall. In 2005-06 the first team won the Kent County Division One West (gaining promotion to the Premier Division) and the Surrey Intermediate Cup, the following season 2006-07 the first team were crowned champions of the Kent County Premier Division and gained promotion to the Kent League. 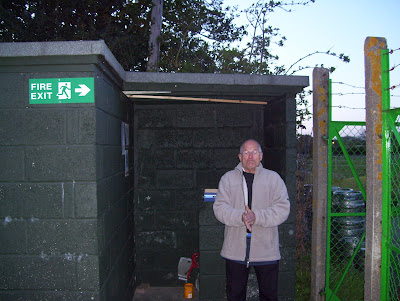 A Tuesday evening excursion to Bromley was facilitated by a train journey from London Victoria to Bromley South. From there, four local bus routes run to Bromley Common. The 320 stops just along Oakley Road from the ground and is the best of the four. For a night match there is a convenient 21:50 service back to Bromley South station. Before boarding our bus, Karaoke Bob and I took advantage of the local Wetherspoon pub opposite the railway station. At The Richmal Crompton we enjoyed Dark Star beers from Sussex. 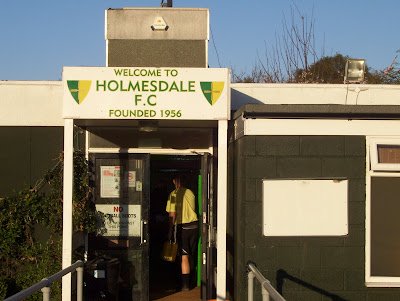 This was a very special evening for Karaoke Bob, he was visiting his 100th ground. Therefore, he is the latest hopper to join Shaun Smith's 100 Football Grounds Club. A champagne moment for Bob and the possibility that the champagne might be shared by Holmesdale FC! The home side in only their second season at this level went into this match just 4 points behind leaders Hythe Town, with a game in hand. Of their four remaining matches Holmesdale will travel to Hythe in the penultimate fixture - game on! 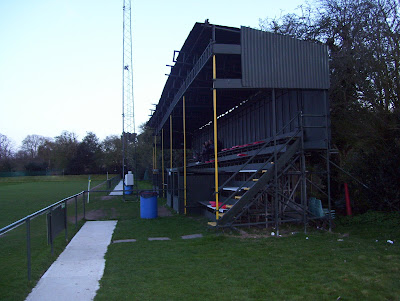 I took the opportunity, to enter the ground early to take some photographs, secure a programme, whilst there the gateman confirmed to me that the pub just over the road was certainly worth a visit. The Two Doves is a fine example of a traditional English pub and my pint of Tribute from the St Austell Brewery was just the compliment this pub deserved. 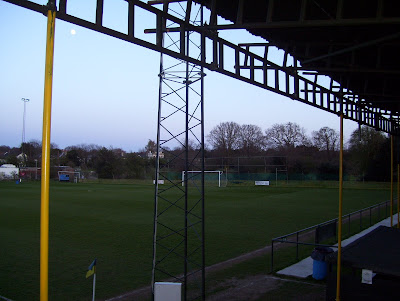 The club has clearly come along way recently and the necessary improvements to the ground in order to  secure senior status are there for all to see. The unique stand is certainly worth a look and gives those seated in the elevated back row an interesting view. Anywhere else in the stand and you are virtually on top of the dugouts! Having said that, it is a lot sturdier than it looks! 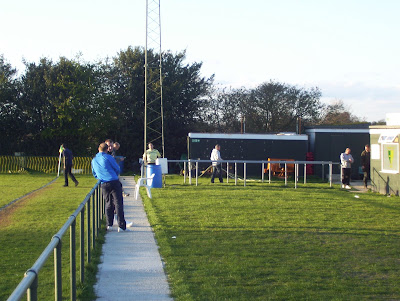 Visitors Faversham Town FC are enjoying a good season themselves and were not prepared to play a supporting role in this match. Despite some early pressure from the home side, it was not long before the visitors tested Holmesdale with a couple of decent crosses from the right flank. Just before the half hour Damian Abel scored a fine 20 yard goal in off the left hand post. Holmesdale battled away in search of a leveller and came close on a few occasions, but Faversham were always a threat on the break and could easily have scored again. It is not over for Holmesdale but clearly Hythe Town are hot favourites for the title now - theirs to lose as they say. 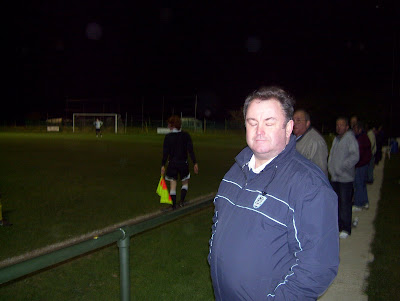 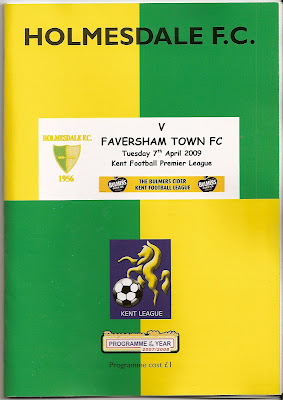