Worcester Park is a suburb of London and a ward in the extreme north west of the London Borough of Sutton. It is 10.2 miles south west of Charing Cross. At the 2001 Census the population was recorded as 9,874. Worcester Park takes its name from the 4th Earl of Worcester, who was appointed Keeper of the Great Park in 1606. The area was once part of a Great Park surrounding the Nonsuch Palace of Henry VIII. Former Prime Minister, John Major lived in Longfellow Road and went to Cheam Common School. 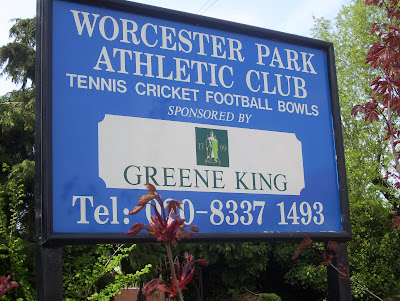 Founded in 1908, Worcester Park FC play at Skinners Field, on Green Lane. This venue could not be much nearer to Worcester Park Station, as the platform looks over the pitch. However, to reach the ground from there it takes a bit less than 5 minutes, crossing over a small stream immediately before entering the ground. Green Lane houses football, cricket, tennis and bowls and is clearly a focal point for the local community. 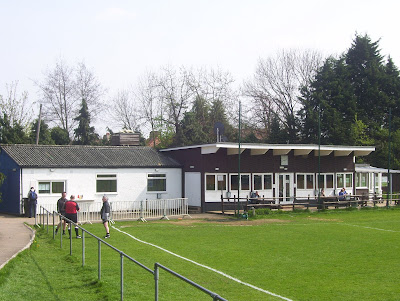 There were a lot people wearing blue football shirts. However, although Worcester Park play in all blue this was merely coincidental as these people were Chelsea fans taking advantage of the club's facilities to watch the FA Cup Semi-Final v Arsenal. Two large TV screens in the bar would facilitate this. Apart from the bar area (Real Ale = Abbot and Greene King IPA - Ed), the clubhouse also boasts a fine refreshment area where a variety of hot food can be purchased. At half-time this journalist enjoyed a decent portion of cheesy chips! 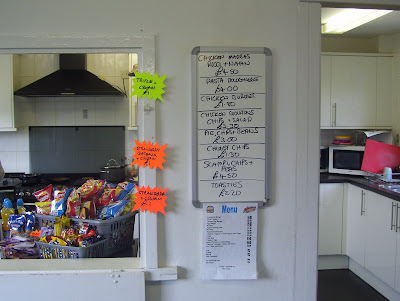 Of the other sports enjoyed at this venue, cricket is clearly a major player. Adjacent to the football pitch is the cricket square and with sunny weather gracing us, it was clear to see that the switch between the two sports was imminent for the Worcester Park faithful. 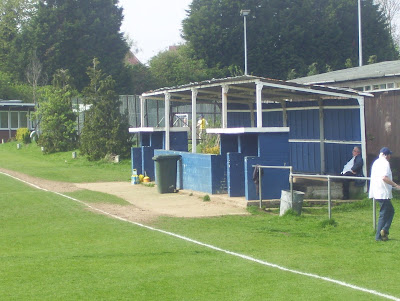 Of course, multi-use venues can mean that football clubs are restricted in what they can provide by way of spectator facilities. At Skinner’s Field there is just the covered area immediately behind the dugouts. This area would be rather cramped on a wintry day with a decent sized crowd. That said it would be possible to get a reasonable view via the windows of the clubhouse bar area. 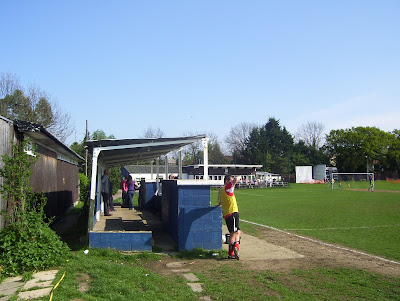 Being a nice sunny afternoon, your scribe took the opportunity to watch the proceedings next to the cricket square on the half way line. I watched the match in the company of Adrian, a fellow Spurs season ticket holder, who along with his pal Dave and another ‘hopper’ from Norfolk had already taken in the Copland v Sloane (Middlesex County League) fixture in the morning. 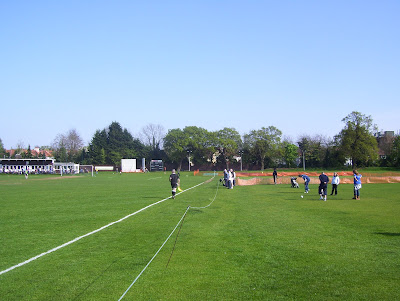 Worcester Park FC has a chance of the league title this season and the club is enjoying a good winning run with games in hand. I have enjoyed the improving standard of Combined Counties League football over the last few seasons. It was clear on this occasion that both these sides are of the ‘footballing’ variety and an interesting match ensued. 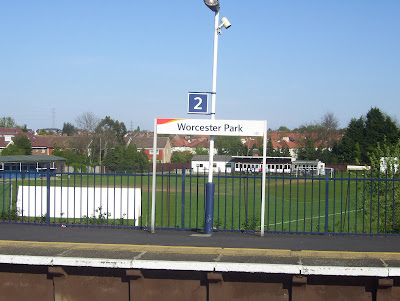 Sensible refereeing ensured that a ‘handbags’ moment did not get out of hand earlier in the match and the Knaphill keeper also deserves credit for removing a team-mate from confrontation at the time. Worcester Park won the match with James Dunning's scuffed effort on 35 minutes, which deceived the visiting keeper. The close proximity of the railway station meant an easy stroll back in time to catch the 16.58 service arriving at Waterloo 20 minutes later. 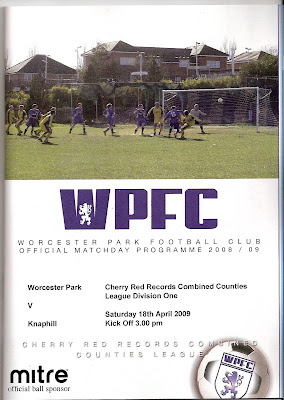