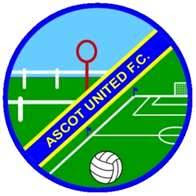 Ascot is a small town within the civil parish of Sunninghill and Ascot, in the Royal Borough of Windsor and Maidenhead, Berkshire, England. It is most notable as the location of Ascot Racecourse, home of the prestigious Royal Ascot meeting. Royal Ascot is without doubt the world's most famous race meeting, steeped in history dating back to 1711. The royal family attend the meeting, arriving each day in a horse-drawn carriage. It is a major event in the British social calendar. The region is split into three distinct areas: Ascot itself, North Ascot (partially in the civil parish of Winkfield) and South Ascot. Tittenhurst Park, the former home of Beatles John Lennon and Ringo Starr is located in Ascot. Also, Girls Aloud singer Sarah Harding was born here and the celebrated Lapworths (Sarah and Kevin) are established on the local social scene. Ascot Priory was founded in 1861 for the Society of the Most Holy Trinity. It has buildings designed by the architects Charles Buckeridge, William Butterfield, George Gilbert Scott and Leonard Stokes. 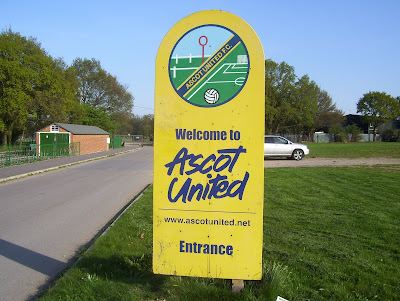 Ascot United FC was founded in 1965 by a men’s team who played their games at Sunninghill, with “after match meetings” in The Wells public house in Cheapside village. Within three seasons, the club had gained permission from the Ascot Racecourse Trustees to convert the land north of coach park 10 into a football pitch. In 2007 the senior team won the Reading League and were promoted to the Hellenic League Division 1 East. In their first season at that level, the club ended the campaign in fourth place. 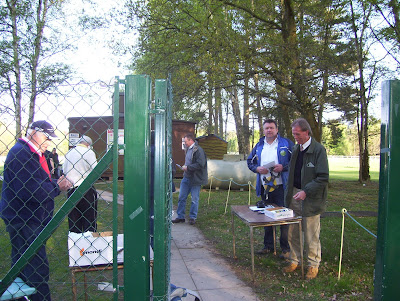 The decent spring weather, a 6:30pm kick off and a disappearing football season, inspired me to venture out to Berkshire to visit Ascot United FC for the final home fixture of the 2008/9 campaign. I travelled from London Waterloo direct to Ascot, with the journey taking a little under an hour. From the station it is up the hill to the high street, where the imposing grandstand of the racecourse is the prominent feature. 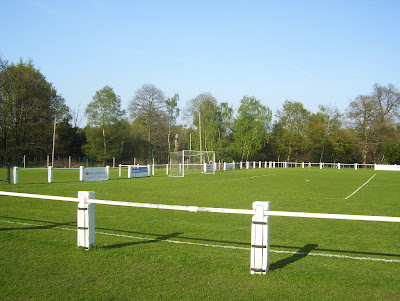 For a relatively small place, Ascot appears to attract an incredible amount of traffic, most of which appears to be passing through. I had been advised that there was not really anywhere en-route to buy food. The options being Budgen or ………… Budgen! So it was onwards to the Ascot Racecourse which is actually situated within the famous racecourse, adjacent to the ‘New Mile’. 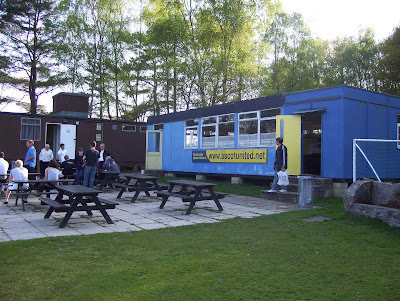 Probably a brisk 15-minute walk from the station, the ground is situated in a fine picturesque setting. The backdrop of woodland and racecourse on a fine sunny evening, set the scene for what turned out to be an eventful match between 2nd placed Ascot United and 4th placed Wokingham & Emmbrook. 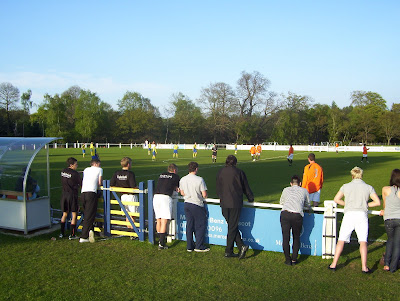 Before proceedings I visited the portakabin refreshment area for a mug of strong tea that set me up nicely for a very competitive and somewhat niggly tussle between two local rivals. Neither side was taking the affair lightly and the match was interrupted by a number of fouls. That said, both teams showed that they are worthy of their current league status with some good passing football. 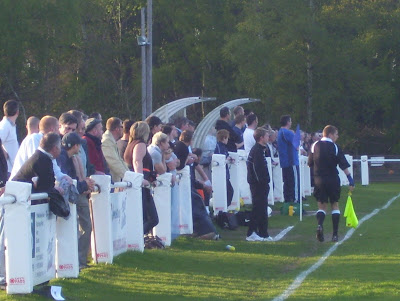 It was a couple of excellent goals that gave the home side the advantage. Firstly a fine long range curling effort from Steve Curtis after 34 minutes broke the deadlock. In the second period, shortly after the visitors were reduced to ten men following a red card for Billy Elgar (two bookings), John Keough struck on 67 minutes. His overhead kick matched the earlier goal for entertainment. However Ascot themselves were soon down to ten men, when Neil Corbett was sent off for deliberate handball on the goal line. From the resultant penalty scored to reduce the arrears and set up an exciting end to the game. However, with a couple of minutes to go the visitors were down to nine men when Nicky Bateman walked for a ‘professional foul’. 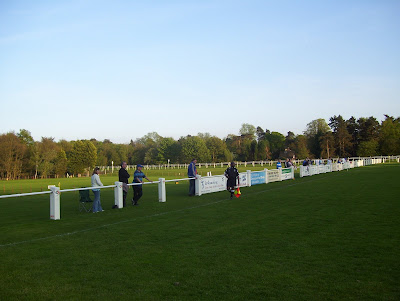 The match ended just before 20:20 and I was delighted to be able to swiftly amble to Ascot Station in time to catch the 20:40 to Waterloo. I enjoyed my visit to Ascot and have to say that the pleasant surroundings enhanced a fine match. As a result of this win, Ascot United guaranteed 2nd place with an outside chance of winning the title. 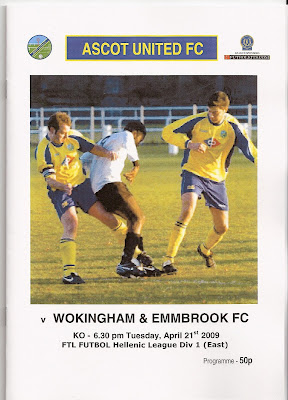