Another end of season, early evening kick-off in the Combined Counties League, drew me to the Wallington Sports Club, the home of Crescent Rovers FC. The club was formed in 1947 by a group of ex-servicemen in the Whitehorse Manor area of Croydon. After initially playing friendly matches, election to the Thornton Heath & District League followed. Gradual progression via various Surrey based leagues culminated in joining the Combined Counties League in 2003, following a merger with the Surrey Senior League. 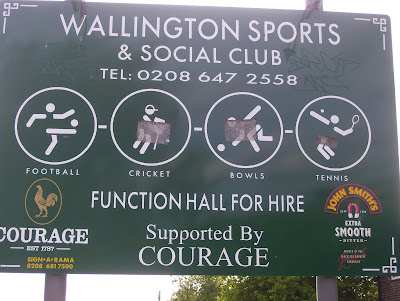 I caught a train from London Victoria to Wallington. The relatively slow service took around 40 minutes to reach Wallington by which time your correspondent had acquired a thirst. Therefore, it was my good fortune to discover the Whispering Moon Wetherspoon pub, where I delighted in Okells Red – a very smooth beer infused with Amarillo hops. 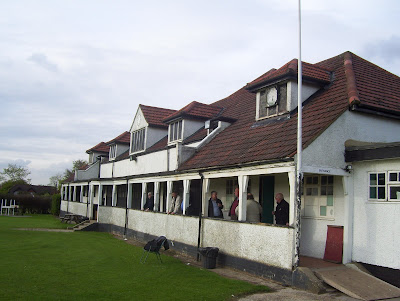 From there I made my way to the Wallington Sports Club in Mollison Drive in about 15 minutes, stopping off at Sainsbury’s for some refreshments as I was not sure what would be available at the ground. With just over half an hour to go before the 18:45 start, a number of neutral individuals were gathering on the veranda of the clubhouse in order to secure their match programmes. Such individuals are often described as Ground Hoppers and your correspondent, if looking in a mirror, may even see such a person! 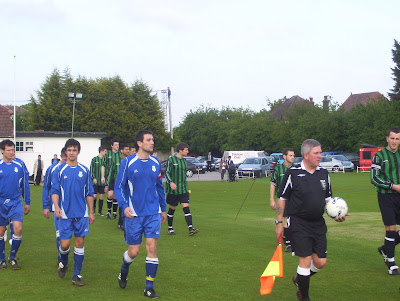 The clubhouse (more of a cricket pavilion in appearance – Ed) is the only permanent structure at the ground. On a wet day, that veranda would provide a fair amount of cover but one would be a fair way from the pitch. This building clearly has a history and is ‘well worn’. It does contain a licensed bar, which opened after the match had started and I did see a sign advertising filled rolls. 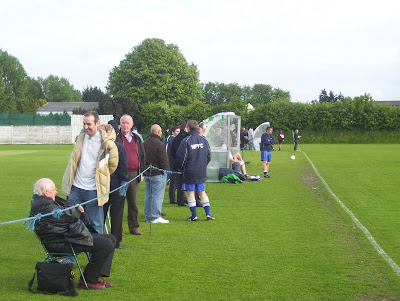 The pitch is roped off on both sides. The near side is adjacent to the cricket square. It is not possible to walk behind either goal which gives an indication of how tight space is in that direction. Both ends are hemmed in with bushes. However, via the neighbouring sports ground through a gap in the hedge I managed to access a raised concreted platform overlooking the pitch, from where I was able to take a couple of photos and view some of the match. 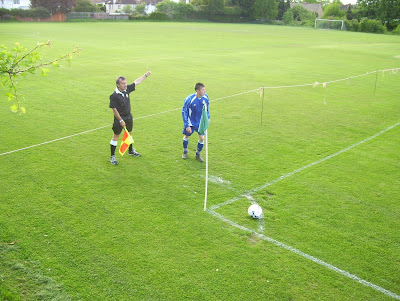 Visitors Worcester Park FC still had a chance of winning the league championship and knew that if they maintained their winning run until the end of the season, they would claim that prize. The home side started the match determined to play more than a support role and despite early pressure from the visitors, took the lead with a fine goal on the break after 13 minutes. 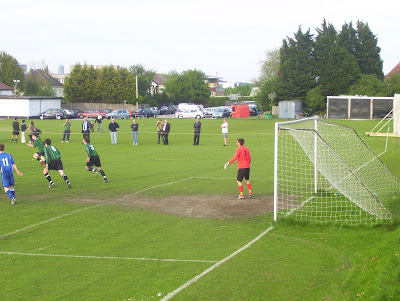 After the match I walked to Waddon station, arriving in plenty of time to catch the 20:57 service to Victoria. Both stations are convenient for Mollison Drive where a couple of bus routes also pass the entrance to the ground. 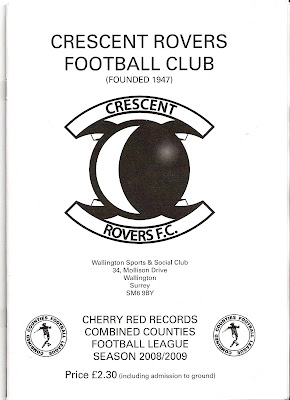 Attendance: 53
Admission: £2-30
Programme: included with admission
Tea: None to be found
Fare: £4-90 (all Zone Travelcard with Goldcard discount)