Queen of the South FC

Queen of the South 2 Dundee 0 - Scottish Football League, Division One

Dumfries is a market town and former royal burgh within the Dumfries and Galloway council area of Scotland and is situated close to the Solway Firth, near the mouth of the River Nith. Dumfries was the county town of the former county of Dumfriesshire. People from Dumfries are known colloquially as Doonhamers. Dumfries was the hometown of Robert Burns from 1791 until his death in 1796. The poet is now buried in St. Michael’s Churchyard in the Burns Mausoleum. Burns was born in Ayrshire and spent many years there before moving to Dumfriesshire. Dumfries got its nickname Queen of the South from David Dunbar, a local poet, who in 1857 stood for Parliament in the General Election. In one of his addresses, he called Dumfries "Queen of the South" and this became synonymous with the town. 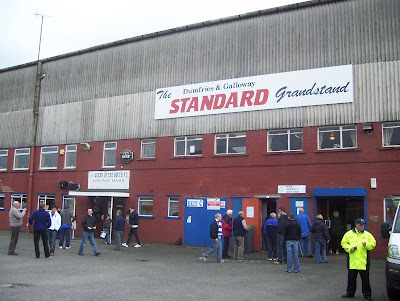 Early in 1919, a handful of Dumfries football enthusiasts met in their homes to discuss not only the restoration of competitive football fixtures locally (following the end of World War I) but also the formation through amalgamation of a local football club to compete at more than a local level. Queen of the South applied unsuccessfully to join the Scottish League for seasons 1921–22 and 1922–23. The ambition bore fruit in 1923–24, however, when they were invited to join the Scottish Football league at its lowest level, the newly created Third Division. 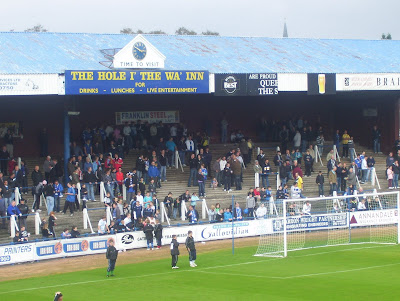 With the recent upgrade to the West Coast mainline, it is once again possible to visit Dumfries for a Saturday afternoon fixture and get back to London comfortably the same day. The added incentive on this occasion was that I was able to secure rail tickets for £12 each way. A 7:30 am departure from Euston with a change at Carlisle should have facilitated an arrival at Dumfries before midday. However a delay meant missing the connection and being forced to drink real ale in a pub near Carlisle station. 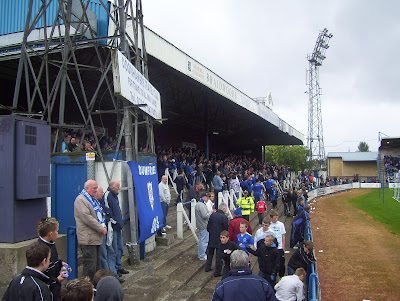 On arrival at Dumfries, further refreshment was required en route to Palmerston Park. Just before crossing the River Nith in the direction of the ground you will come across the conveniently situated the Cavans Arms. The CAMRA recommended establishment is widely recommended and it is easy to see why. They were doing a roaring trade on meals this lunchtime and I understand that this is the norm, (evenings too when you are advised to book – Ed). Whilst here, this Pieman delighted in a couple of pints of Wildcat, a 5.1% offering from the Cairngorm Brewery. This splendid dark liquid set me up nicely for the brief onward stroll to the stadium. 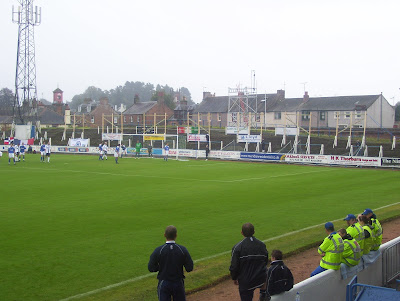 Palmerston Park is a mixture of old and new. Along one side is the main stand, from where I watched the first half. My central front row seat was immediately above the Dundee FC bench. I am particularly grateful to Queen of the South FC for their generosity in providing Pie and Mushy Peas a complimentary ticket for this match. In front of the main stand either side of the tunnel and technical areas, are terraced enclosures. Only one of which was in use. Opposite the main stand, running the full length of the pitch is a smartish looking covered stand. Although perhaps lacking the character of the rest of the stadium, it provides a good comfortable view of proceedings. 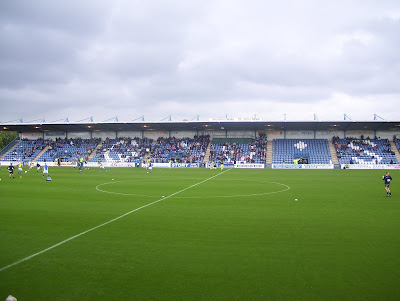 Behind one goal is a section of unused uncovered terracing, offering a glance at a bygone era perhaps. At the other end is a groundhoppers delight; a partly covered large terrace that is clearly a throwback to when each football ground had its own uniqueness. It was not long before this match exploded into life with the award of a penalty to the home side on five minutes. Dundee custodian Tony Bullock was red carded for bringing down David Weatherston. The resultant spot kick was converted by Steve Tosh. 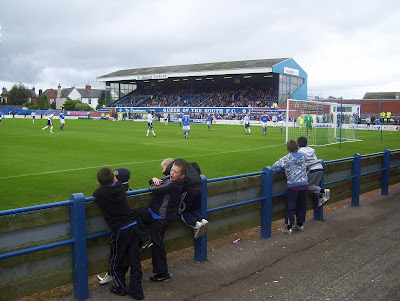 This Pieman switched to the terrace for the second period in order to sample the atmosphere. It was good to enjoy the freedom of that environment (something alien to the Premier League – Ed). It was very noticeable that there were a lot of young children present at the match. Queen of the South is clearly a community club and this was good to see. It certainly bodes well for the future. Admission for under 16s is just £3 and with a season ticket this is reduced to £1.

Despite having a decent proportion of the play, big spending Dundee will have been disappointed not to have converted any of the chances that came their way. A second counter compounded this failing for the home side scored by Derek Holmes. Even at 2-0 Dundee continued to press the home side and created the better chances. On two occasions it seemed certain that they would score but the woodwork and wayward shooting determined otherwise 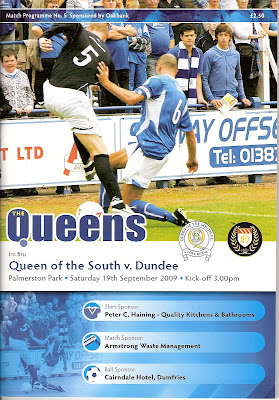 It takes a little over fifteen minutes to reach Dumfries railway station from Palmerston Park. So the 17:32 departure for Carlisle should never pose a problem for a Saturday afternoon match. Scottish matches also tend to be completed on time without any fuss. The connecting train from Carlisle reached Euston at 22:45 and I was home at Cheshunt before midnight. A long but enjoyable day! If you have not been to this friendly club and fine town before, I can thoroughly recommend it. 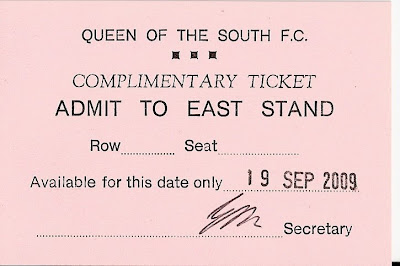 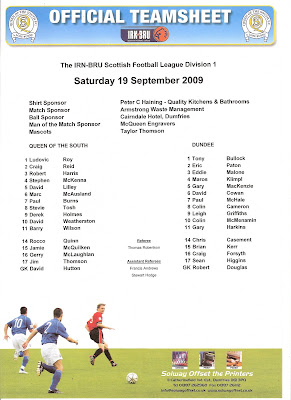