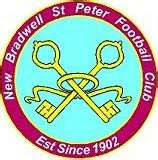 New Bradwell St. James Football Club was founded in the 1880's, its headquarters being at the Forresters Arms. The club was named Stantonbury St. James, formed by members of the St. James Church on the Newport Road. Soon after, they were renamed Stantonbury St. Peter. In 1946/47 they changed their name again when New Bradwell Corinthians Football Club found themselves in difficulties and merged with the Peters, thus the change from Stantonbury to New Bradwell St. Peter. Still later, came another change of ground, from the Mutual Meadow to the Recreation Ground, using the New Inn for training, then known as The Progressive Club. At this time the Football Club invited the Cricket Club to join them in an effort to build a Sports Pavilion on the Bradwell Road Recreation ground. After lengthy discussions with the local council, the venture came to fruition and the New Bradwell Sports Club was officially opened by Councillor Dr. Love. 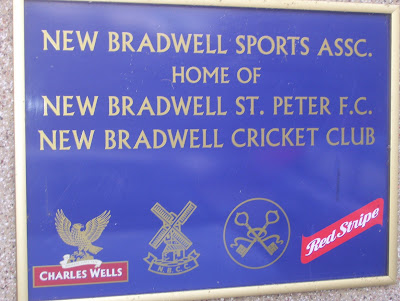 The plan was to catch the 13:13 departure from London Euston. This service arrives at Wolverton at 13:58. Arriving at this time would allow an hour to walk to the Bradwell Road Recreation Ground. However, a flurry of emails the previous day facilitated this Pieman and Harry Hotspur being met at Wolverton station by the legendary MK Gould and his lads. The lift to the ground (estimate 20 mins walk – Ed) took a slight detour, as we took the opportunity to have a look at the old Wolverton ground. Sadly I never got to see a match at that venue, a real shame considering the hundreds of times I must have passed it on the train. The place is now a green meadow with the only glimmer of a footballing past being a covered shelter in the style of that fine old stand of yesteryear, adjacent to the huge imposing factory wall. 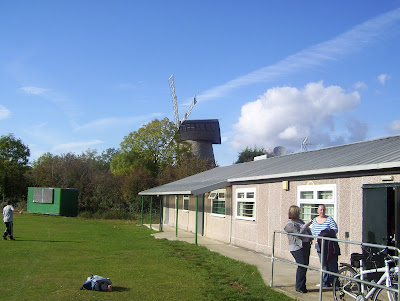 I remember Brian Buck (celebrated Ground Hopper - Ed) telling me many years back, that getting to New Bradwell St Peter FC was simple, “just head for the windmill”. How right he was as the fine old structure certainly gives a rural feel to this part of Milton Keynes and is right next door to the shared cricket and football facilities. An earlier than anticipated arrival enabled us to enjoy the facilities of a decent clubhouse, the added bonus being Charles Wells Eagle IPA on hand-pump! 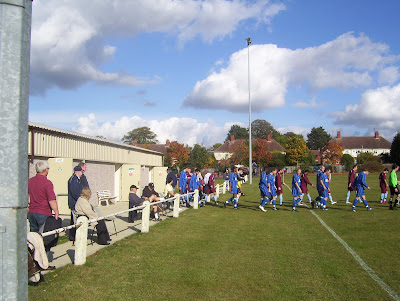 Apart from the clubhouse building, there is also a separate building housing the changing facilities. This is situated next to the fully railed off pitch with concrete walkway. In front of this building is a hard-standing forecourt a few seats. On the opposite side, behind the dugouts, is a large covered terrace with some bench seating at the front. Plenty of cover for all when the weather turns I would suggest! 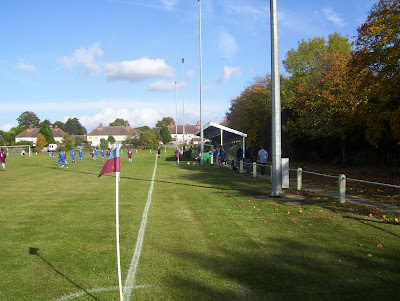 We did not have to wait long for the first goal of the afternoon; the home side taking the lead when John Mulholland expertly guided the ball home. As the first period progressed, visitors London Colney FC started to impose themselves on the match. However, rushed or wayward shooting often spoiled good build up play. When the equaliser did come it was from a fine strike by Frankie Jowle via the left side upright. 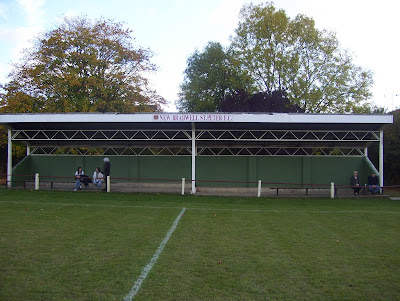 The home side was soon back in front through Joey Acheampong. At the break we enjoyed tea and hotdogs from the clubhouse before settling to watch the remaining 45 minutes. However special mention must go to referee Mr J Groom who clearly enjoyed being the centre of attention. Whenever he had to speak to players, he made such a song and dance of it (just get on with it ref – Ed). 45 minutes became 55 and any chance of the 17:04 train from Milton Keynes Central evaporated. 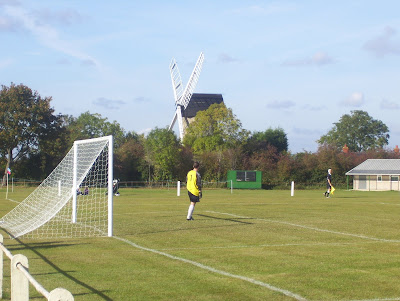 The closing minutes of the game were enlivened by a fine 3rd goal for New Bradwell St Peter when Adam Castagnetti's fierce drive eluded the fingertips of the keeper and sealed a good win. 24 points from twelve matches is an excellent start to the season for the club. 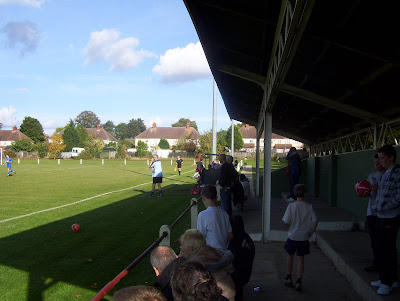 Courtesy of MK Gould we only just missed that 17:04 train but were pleased to be allowed to catch the 17:19 Virgin train which arrived at Euston only a minute after that earlier service. On days like this it is possible to appreciate the benefits of the upgrade of the West Coast Main line (long time coming – Ed). A fine afternoon out in good company, a friendly club to visit and a windmill - what more could you ask for?