Shrewsbury is the county town of Shropshire. Lying on the River Severn, it is the primary settlement and headquarters of Shropshire Council. Consequently, it is the second largest town in the county of Shropshire, after Telford. Shrewsbury is a historic market town with the town centre having a largely unaltered medieval street plan. The town features over 660 historic listed buildings, including several examples of timber framing from the 15th and 16th centuries. Shrewsbury Castle, a red sandstone castle fortification, and Shrewsbury Abbey, a former Benedictine monastery, were founded in 1074 and 1083 respectively, by the Norman Earl of Shrewsbury, Roger de Montgomery. The town hosts one of the oldest and largest horticultural events in the country, Shrewsbury Flower Show, and is known for its floral displays, having won various awards since the turn of the 21st century, including Britain in Bloom in 2006. 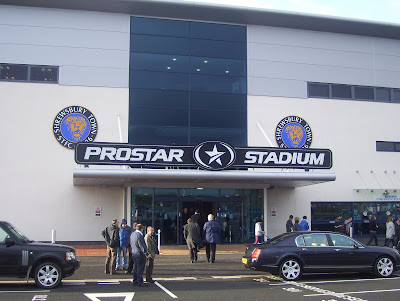 Shrewsbury Town FC was formed in May 1886, indirectly following the demise of Castle Blues. The Blues were a rough team, leading to their demise after several games were marred by violence. The new team hoped to be as successful but without the notoriety. Press reports differ as to the date the new club was formed, The Eddowes Shropshire Journal of 26 May 1886 reported the birth of the club at the Lion Hotel, Wyle Cop, Shrewsbury. The Shrewsbury Chronicle reported the club as being formed at the Turf Hotel, Claremont Hill, Shrewsbury. It may be both accounts are true, with a get-together at the Lion being finalised at the Turf. 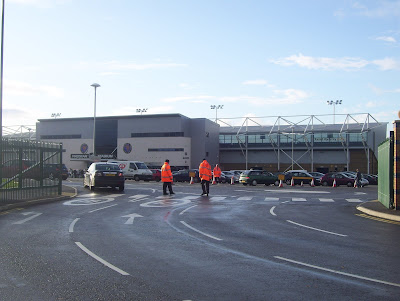 This Pieman visited the club's previous Gay Meadow ground for a match against Crystal Palace in August 1985. On that occasion the match had been put back 24 hours due to a clash with the Shrewsbury Flower Show. With severe gales and heavy rain forecast for the country, it was with some trepidation that we set out from London Euston. Our journey involved a change of trains at Birmingham New Street. On arrival at Shrewsbury, we were pleasantly surprised that, although blustery, the rain was limited to sporadic showers (game on – Ed). 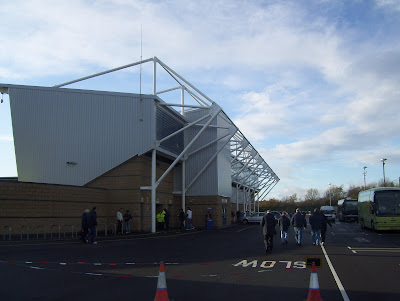 In search of refreshment, we made our way to the Shrewsbury Hotel, where as part of the Wetherspoons festival of ale, Bat’s Hat (Banks & Taylors), Old Vic (Butcombe) and Coppergate (York Brewery) were sampled. A short walk from this establishment is The Armoury where Shropshire Pride, a fine brew from the Worfield Brewing Co, was enjoyed. Still the best was yet to come at the, GBG listed Salopian Bar, in the shape of Station Bitter from the Stonehouse Brewery. All three establishments are located alongside the River Severn and are less than 10 minutes walk from the railway and bus stations. 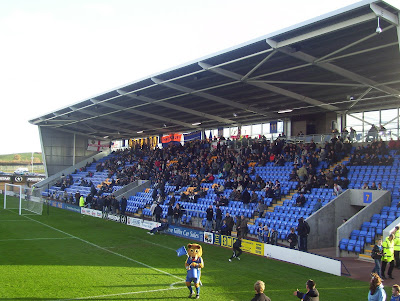 It was from the bus station that we took advantage of the special bus service to the New Meadow (Prostar Stadium for sponsorship purposes - Ed). It has been reported that this new stadium lacks in character and originality (unlike Gay Meadow – Ed). To be fair I can understand such comments but to balance the argument, there isn’t a bad view anywhere to be had. The pitch was very good considering the weather and allowed both teams to demonstrate good passing ability. The four stands are similar in design with the main stand housing some corporate facilities. Behind each goal were some excellently sited wheelchair facilities. 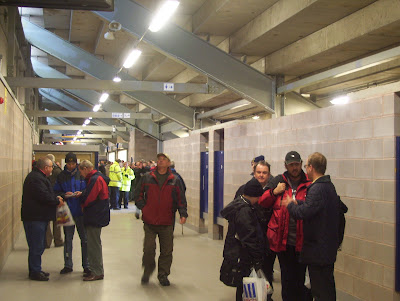 This match pitted the home side, still smarting from a home defeat to Staines Town in the FA Cup the previous week, yet just outside the play-off positions, against Torquay United, third from bottom of League One. The goal free first period was decent enough for the neutrals present to appreciate both sides trying to play positive football. The blustery conditions would not have helped such endeavour. The game sprang to life on 54 minutes when Kieran Charnock was given a straight red card following a challenge. To their credit 10 men Torquay United kept their shape and scored through Chris Hargreaves with a quarter of an hour to play. The home side levelled four minutes later with a fine strike from David Hibbert. A draw was a fair result with neither side doing enough to deny their opponents a share of the spoils. 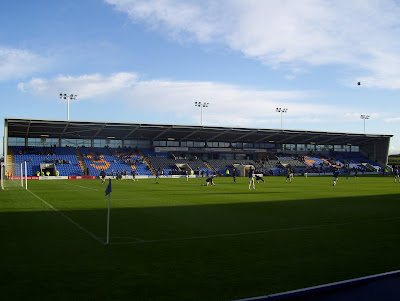 This Pieman spent the last couple of minutes of the match in the front row of the stand and I can confirm that it was getting a tad chilly down there! What this does demonstrate though, is the fine shelter that these stands offer, as it was only at this point that I realised how cold it was. The special bus was on the move 10 minutes after the final whistle and we were back in town in plenty of time for a pint before catching a direct train to London Marylebone courtesy of Wrexham & Shropshire Railway. 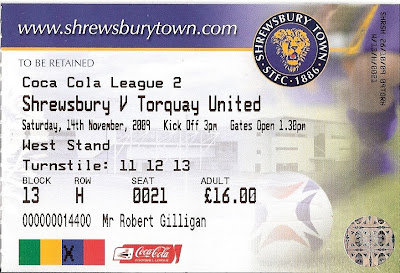 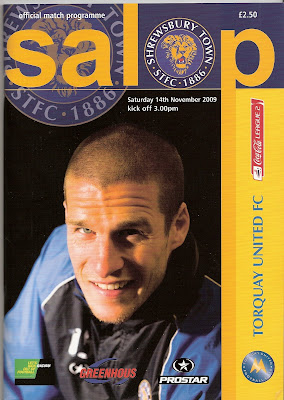