During the Industrial Revolution Wigan experienced dramatic economic expansion and a rapid rise in the population. Although porcelain manufacture and clock making had been major industries in the town, Wigan subsequently became known as a major mill town and coal mining district. The first coal mine was established at Wigan in 1450 and at its peak there were 1,000 pit shafts within 5 miles of the town centre. Mining was so extensive that one town councillor remarked that "a coal mine in the backyard was not uncommon in Wigan". Coal mining ceased during the latter part of the 20th century. In 1974, Wigan became a part of the newly formed administrative Greater Manchester. Wigan Pier, a wharf on the Leeds and Liverpool Canal, was made famous by the writer George Orwell. In his book, The Road to Wigan Pier, Orwell highlighted the poor working and living conditions of the local inhabitants during the 1930s. Following the decline of industrial activities in the region, Wigan Pier's collection of warehouses and wharfs became a local heritage centre and cultural quarter. 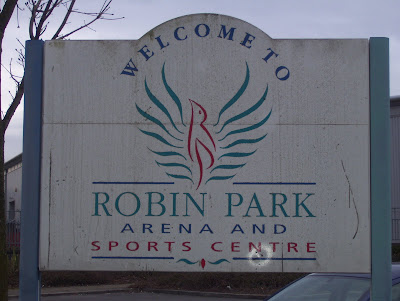 Wigan Robin Park FC was founded in 2005, initially the idea of Mike Woodruff (manager of Robin Park Arena) as part of the trust's drive to increase participation at all levels at the borough's sporting facility. The club play their home games at the Robin Park Arena on Loire Drive, adjacent to the DW Stadium. 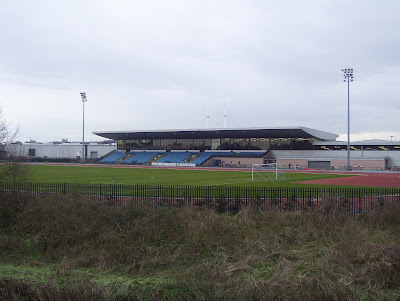 This Pieman was scheduled to attend a workshop in Manchester and in anticipation of a rail strike had opted to stay overnight. This facilitated a Tuesday evening jaunt over to Wigan. This particular match had originally been a St Helens Town FC home fixture. However, following two postponements, under the rules of the competition, the tie was switched to Wigan, becoming their home fixture.

The Robin Park Arena is very easy to locate (walked past it enough times – Ed), an easy 15 minute stroll from the railway stations. The stadium is fully enclosed and contains an eight lane running track. There is a decent covered seated stand covering about half of one side. The stand is part of the main complex also house an indoor gym area. Much of the remainder of the ground is bordered by trees. You enter the ground via the main entrance and pay at reception (a bit like going into swimming baths – Ed). This Pieman paid by credit card – a first for this level of football! 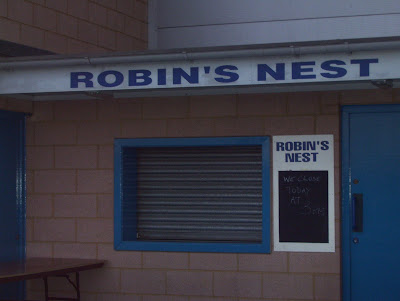 St Helens Town FC plays in the top flight of the North West Counties League, a division above their hosts. It was no surprise that the visitors were the more assertive in the opening exchanges. St Helens struck twice in the opening period and looked comfortable throughout. With driving rain falling throughout the match, it is a credit to both teams that they continued to play passing football. A 3rd goal for St Helens just before the hour was followed by a Wigan counter from the penalty spot - the visiting keeper receiving a red card for his troubles. Any nerves for St Helens were settled by their fourth goal before a final consolation for Wigan in the closing minutes. 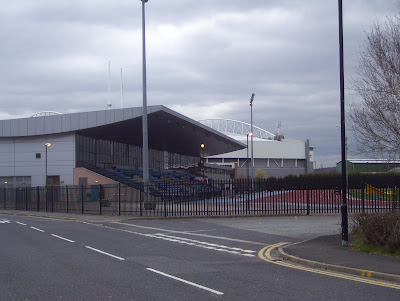 This Pieman is particularly grateful to Andrew Vaughan, Press Officer for Wigan Park, for his hospitality. It was nice to be invited to the board room at half time for tea and sandwiches. Throughout the match, Robin’s Nest was also doing a good trade in hot pies. It was nice also to be able to chat with Wigan’s manager/chairman John Neafcy before the match. Special mention also to the ball boys who assisted in keeping the game flowing. In vast arenas like this, so much time can be lost when players have to retrieve the ball. 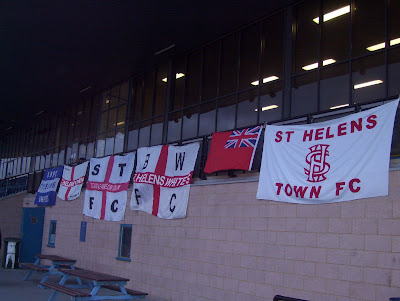 This was a 20:00 kick off and I was back in Manchester just after 23:00. I can now claim to have attended a Wigan v St Helens match – without an egg shaped ball in sight!