Downham Market, also known simply as Downham, is a town in Norfolk. It lies on the edge of the Fens, on the River Great Ouse, south of the town of King's Lynn, west of Norwich and north of Cambridge. It was an agricultural centre, developing as a market for the produce of the Fens with a bridge across the Ouse. During the Middle Ages, it was famed for its butter market and also hosted a notable horse fair. The town is also known as the place where Charles I hid after the Battle of Naseby. 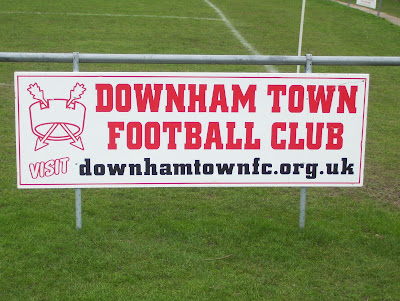 The football club was established in 1881, and were originally nicknamed the Saints. They initially played in junior leagues in the Kings Lynn area, before joining the Peterborough and District League. In 1949 the club gained senior status after being elected to the league's Premier Division. The club became a founder member of the new Division One of the Eastern Counties League in 1988, where they have remained since. 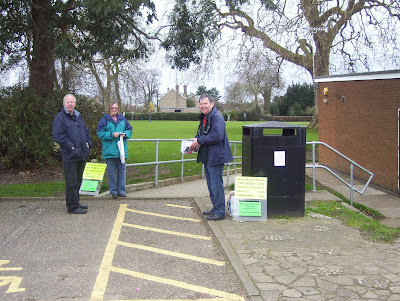 We travelled to Downham Market by car, from Cheshunt it is effectively just one road – the A10. It was a relatively easy journey with most of the bank holiday traffic heading in the opposite direction as people returned from their long weekend in Norfolk. The directions on the club website assisted greatly in avoiding the town centre, as we reached the Memorial Playing Field via Lynn Road. 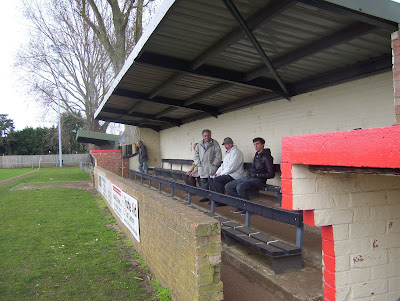 This three sided venue is situated in a park and is shared with the local cricket club. Both ends are bordered by a wooden fence along with the main side which houses a seated stand, with two additional covered standing areas. The side of the ground also features five enormous trees, reflecting the age of this particular sporting venue. The remaining side is railed for the winter sport and unlike the other sides, is without hard standing. 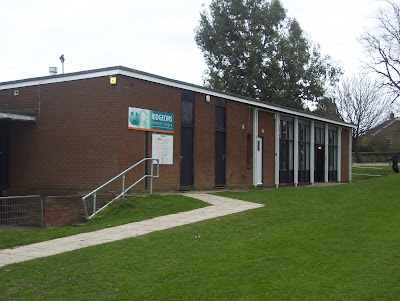 Free scones and biscuits are available when purchasing teas from the hatch inside the clubhouse and this nice gesture appears to typify this friendly club. The same building also houses a licensed bar. Downham Town FC has struggled this season, registering just six league wins. They have been on the receiving end of some heavy defeats and only two days prior to this match, suffered a 0-9 reverse at FC Clacton. 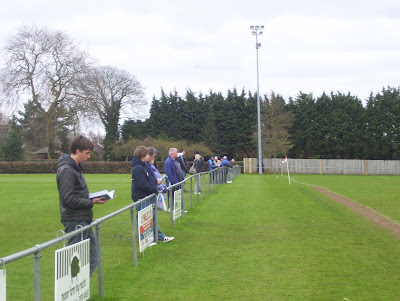 Accordingly, visitors March Town United FC will have gone into the match confident of securing maximum points. The home side appeared to lack confidence and seemed reluctant to push forward when in possession. Following a fine opening strike, the visitors held a 2-0 lead at the break. 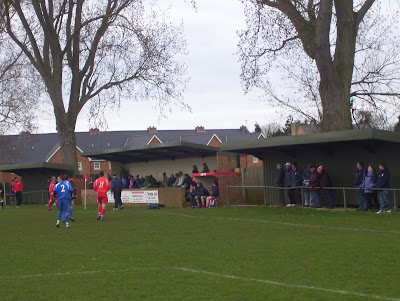 The home side rallied after the interval and were unlucky not to reduce the deficit when a clever shot struck the woodwork. March eventually clinched the points when a cross from the right eluded everyone to make it 3-0. This was an enjoyable afternoon and worth bearing in mind that admission including programme was only 50p more expensive than the price of a programme at Fulham and West Ham this season! 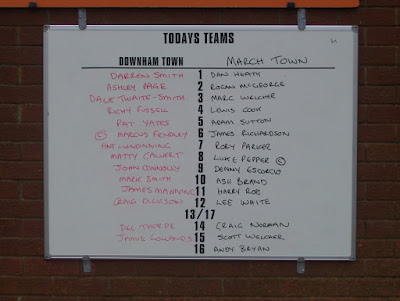 Our journey home was good and I was back indoors at 18:45. I have to say that the Eastern Counties League is a particular favourite of mine and I look forward to visiting more of the member clubs. Without exception I have found club officials to be friendly and helpful. 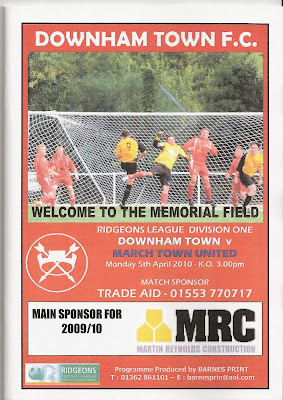