Morecambe is a resort town and civil parish within the City of Lancaster in Lancashire, England. It faces into Morecambe Bay. In 1889 the villages of Bare, Poulton-le-Sands and Torrisholme collectively became known as Morecambe, though those areas of Morecambe are still known by their original names. Morecambe was a thriving seaside resort in the mid-twentieth century. While the nearby resort of Blackpool attracted holiday-makers predominantly from the Lancashire mill towns, Morecambe had more visitors from Yorkshire and Scotland. Between 1956 and 1989 it was the home of the Miss Great Britain beauty contest. Morecambe suffered from decline for a number of years following a series of incidents that affected its tourism and local economy. Two piers were lost: West End Pier was washed away in a storm in 1978 while Central Pier, though struck by fire in 1933, survived until 1992. In 1994, The World of Crinkley Bottom attraction in Happy Mount Park closed only 13 weeks after opening and the ensuing 'Blobbygate' scandal led to a legal battle between Lancaster City Council and TV star Noel Edmonds. 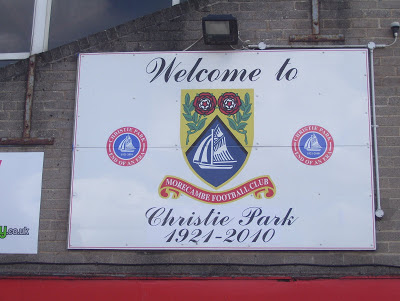 Football in the town dates back to the turn of the 20th century; however it was not until 7 May 1920 that Morecambe FC was formed after a meeting at the local West View Hotel. The club then took its place in the Lancashire Combination League for the 1920-21 season. A few years later after the purchase of the ground by the then-President, Mr. J.B. Christie, the grounds' name was changed to Christie Park, in his honour. Morecambe were promoted to the Football League for the first time in their history after winning the Conference National Playoff Final 2007.

Our journey from London Euston via Lancaster facilitated getting to Morecambe just after midday. On arrival, we headed straight for the Smugglers Den on Poulton Road. This fine hostelry is situated no more than a 15-minute walk from Christie Park. Whilst at this establishment, this Pieman was able to enjoy Bryson’s Union Flag (3.9) and Lancaster Brewery’s Blonde (4.1).

This match was initially scheduled to be the last competitive match at Christie Park for Morecambe FC. Their new Globe Arena will be ready for the start of the 2010/2011 season. However, a late surge up the table had seen Morecambe FC sitting in a play-off position going into this final match of the league season. A draw against Aldershot Town (already assured of a play-off place – Ed) would be enough to guarantee a further Christie Park match.

The club marked the special day by producing a commemorative official souvenir programme for £8-00. A lot of money for a League Two programme perhaps, but this really is a superb 132-page A4 publication. In addition there was a marquee situated on the field behind the main stand which was to be the venue for the club’s awards event that evening. Community singing and Aldershot Town fans in fancy dress set the scene for the afternoon. This Pieman had opted for a terrace ticket in front of the stand and it was good to mingle with regulars in that area, The Pie and Peas available from the serving hatch looked mighty tempting but for once restraint was the order of the day.

The match promised so much, yet failed to live up to expectations. This was despite the best efforts of both sets of players. A blustery seaside wind did little to help in this respect. It was the visitors who looked the more likely winners if the first period was anything to go by. Approaching half time Morecambe were more assertive and had a couple of chances. The second period saw the home side take the game to Aldershot and the decisive strike from Garry Hunter on 72 minutes was enough to see the Shrimps end the season in 4th position. A defeat for Rotherham United also meant that these two sides could meet again this season at Wembley as opposed to the two legged semi-final.

After the match, having read a number of favourable reports, we sampled the delights of the fish & chip shop near the away end. This Pieman was relieved that he did not order the large haddock, as the medium variety was a more than adequate accompaniment for the chips and mushy peas! After this solid refreshment pit stop we returned to Lancaster via Bare Lane station which appears to be slightly nearer than Morecambe station to Christie Park.


Lancaster was to be our base before trekking over to Turf Moor the following day. This Pieman was mightily impressed with the range of pubs and ales available and would certainly recommend Lancaster to anyone searching for gastronomic enjoyment. At the White Cross I enjoyed Old Faithful (4.0) from the Tyrell Brewery, at the Penny Bank, a fine pint of Golden Monkey (4.1) came from Brass Monkey Brewery. Further treats followed in the shape of Amber (3.7) from the Lancaster Brewery at the Sun Hotel and Allendale Best Bitter (3.8) at The Borough. In this Pieman’s opinion all of the visited establishments were good with the latter two being top notch. 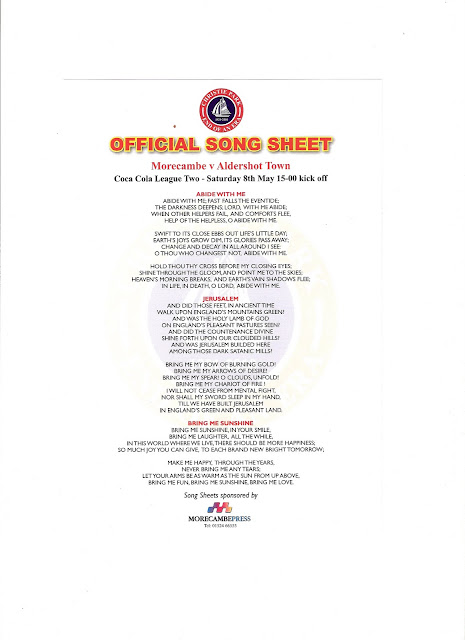 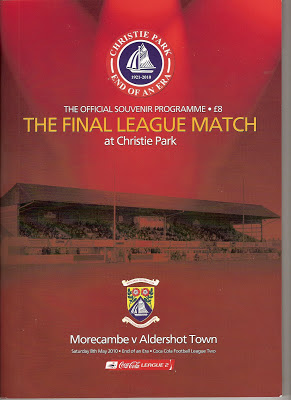 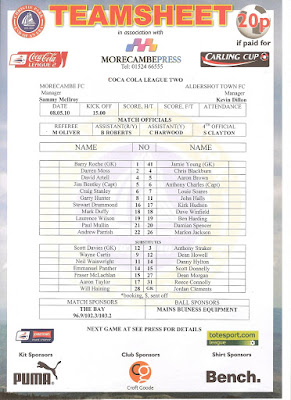