Lisbon is the capital and largest city of Portugal. The urban area of Lisbon extends beyond the administrative city limits with a population of 2.4 million. It is the 12th most populous urban area in the European Union. Lisbon is the westernmost city located in Europe. It lies in the western Iberian Peninsula on the Atlantic Ocean and the Tagus River, about 320 km north-west of Cape Spartel in Africa. Lisbon enjoys a Subtropical-Mediterranean climate, and though influenced by the Gulf Stream it has one of the mildest climates in Eurasia.

Lisbon is one of the oldest cities in the world. Ruled by a series of Germanic tribes from the 5th century; it was captured by Moors in the 8th century. In 1147, the Crusaders under Afonso Henriques re-conquered the city for the Christians and since then it has been a major political, economic and cultural centre. Unlike most capital cities, Lisbon's status as the capital of Portugal has never been granted or confirmed officially – by statute or in written form. Its position as the capital has formed through constitutional convention. 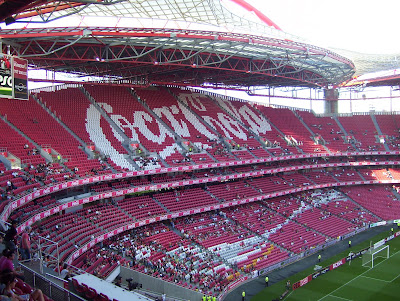 Founded in 1904, in the southwest part of Lisbon, Benfica was one of the founding members of the Portuguese Liga in 1933, and, together with Porto and Sporting, they have never been relegated from the top division. Twice winners of the European Cup, Benfica also has one of the biggest fan bases in the world. As of 23 June 2010, Benfica has a reported 218,216 paid club members. As a multiple sport club, Benfica has departments for basketball, roller hockey, indoor football, volleyball, handball, water polo, rugby, and cycling, among others. 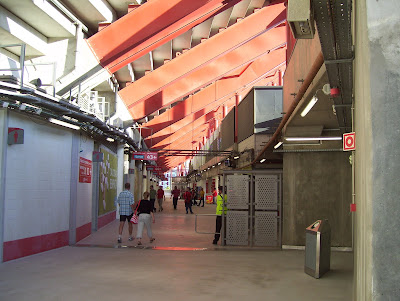 Courtesy of Easyjet, our flight from Luton to Lisbon took just over two hours. From the airport it is then a short bus ride to the centre as Lisbon airport is very close to the city. We did not reach the hotel until about 9pm but as is dictated by climate people tend to go out to eat later in Portugal and it was not long before we were enjoying a meal at one of the many café bars situated in the main area. 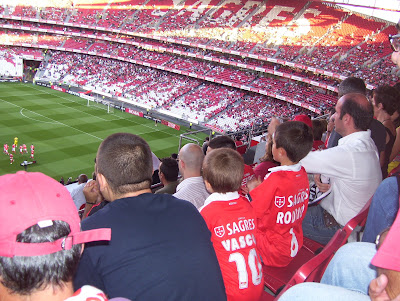 On the morning of the match, we ventured up to the ground to purchase match tickets. Lisbon has a decent metro system and there are two stations (Alto dos Moinhos or Colégio Militar/Luz) close to Estádio da Luz. To use the metro, you need to purchase the Lisbon equivalent of an Oyster Card (50 cents) then add credits for each individual journey (85 cents). The top price for match tickets was 50 Euros. We opted for half that price, electing to sit in the upper tier. 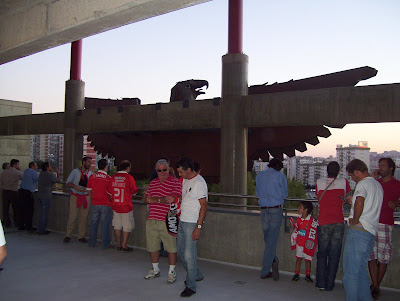 The ground is named after "Our Lady of the Light" (Nossa Senhora da Luz or more commonly Luz) which is the name of the Lisbon parish where the stadium stands. The current capacity of the stadium is 65,647. The previous stadium, bearing the same name, actually held a crowd of 130,000. Even for this friendly (Eusébio Cup), for which the official attendance was less than half capacity, the stadium was mightily impressive. 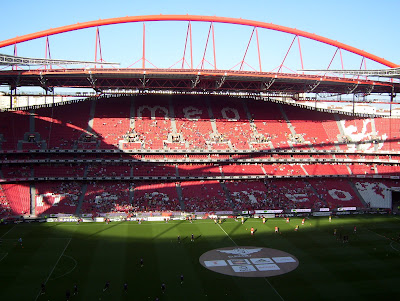 Prior to kick off we were treated to the regular pre-match ritual of the Benfica Eagle flying around the stadium before settling on a perch in the middle of the pitch. An impressive sight and certainly something that gets the crowd involved. A much improved Tottenham Hotspur performance (they were awful against Villarreal 5 days previously - Ed) saw them win the match, courtesy of a second half Gareth Bale strike. 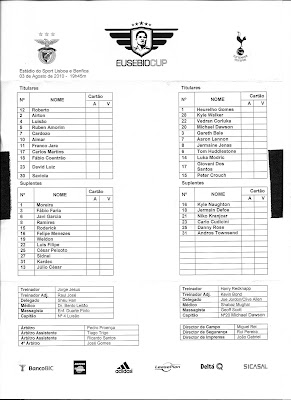 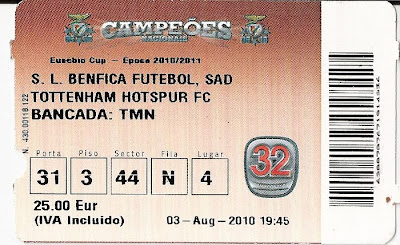