Kempston was once known as the largest village in England but is now a town. Until the 19th century Kempston was a mainly rural parish. It was one of the largest in Bedfordshire with an area of 5,025 acres at the time of enclosure in 1804, and was in Redbournestoke Hundred. Historically there was no central village, but instead settlement was divided between a number of hamlets called "Ends", for example, Up End, Wood End and Box End. Kempston's parish church, All Saints, was in Church End. Kempston in its old form means bent or curved. Therefore when coined the name meant settlement on the bend of the Great River Ouse. 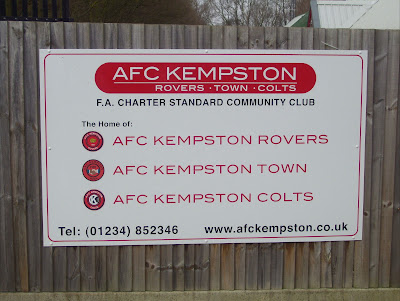 Kempston Rovers FC was founded in 1884 and the club is currently celebrating their 127th year of existence. Known as The Walnut Boys due to the original ground originally being an orchard of walnut trees, the club started out in the Bedford & District League. After a spell in the South Midlands League, the club joined the United Counties League in 1953. The current ground Hillgrounds Leisure is the third ground that the club has occupied on Hillgrounds Road! In 1975 the club reached the last 16 of the FA Vase. 2002 saw the merger of Kempston Rovers, Kempston Town and Kempston Colts under the collective name AFC Kempston. 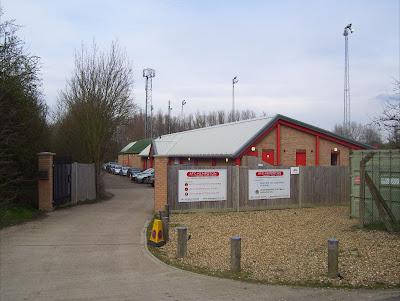 The original intention was to watch Bedford v Hoddesdon Town in the Spartan South Midlands League and a car journey from Cheshunt was straightforward enough, enabling us to reach Meadow Lane 50 minutes before the scheduled kick off. There was already plenty of activity but unfortunately this was for Bedford Town v Hemel Hempstead Town at the adjoining stadium. I was informed by a turnstile operator that Bedford FC were unable to use their ground due to a fire and that they were playing at Wooton. I may have missed something but I struggled to find any reference to this on club or league websites. 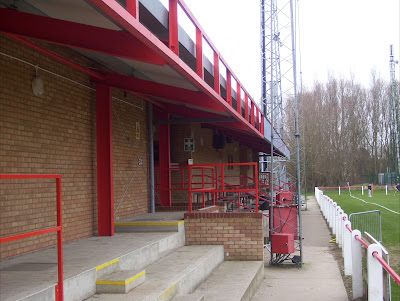 The easy option would have been to go next door and watch the Bedford Town match, but my preference was to visit somewhere new. Without any prior knowledge we headed for neighbouring Kempston, with at best a 50/50 chance of the United Counties League club having a home fixture. We had little difficulty locating the ground as there are signposts to Hillgrounds, although it is not clear that this relates to football. Something in the memory clicked and we were rewarded when arriving to find a match on. 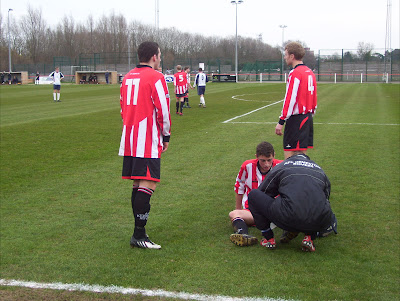 Once inside the ground with 15 minutes to spare, there was opportunity to explore. I came across the clubhouse bar with two TV screens, one showing the Italy v France Rugby union match and another showing the post match interviews from the Birmingham City v Bolton Wanderers FA Cup tie. More importantly was the Charles Wells Eagle Bitter on handpump, which I tested (purely for journalistic purposes – Ed). 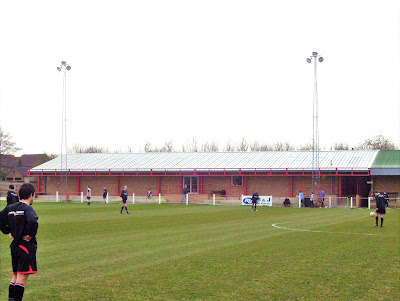 Apart from the dugouts, the only permanent structure is the stand/changing rooms/clubhouse along one side of the pitch. One side of this impressive block is seated whist the other is terraced and also houses the tea bar. There are additional changing facilities in the same block serving the outer pitch. Between the main pitch and the outer pitch is an astroturf area, both additional facilities were in use at the same time as our match. 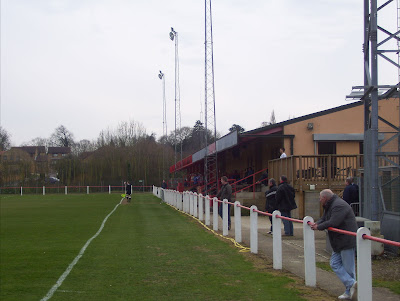 The visitors are struggling this season, in contrast to their hosts, but competed well in the first period. They did not concede until the 39th minute when an own goal undid their earlier efforts. However, this was compounded by a reckless challenge a minute later rewarded with a red card. In the second period, further strikes on 54, 58 (a classy goal from Kofi Schulz) and 89 ensured comfortable 3 points for promotion chasing Kempston. 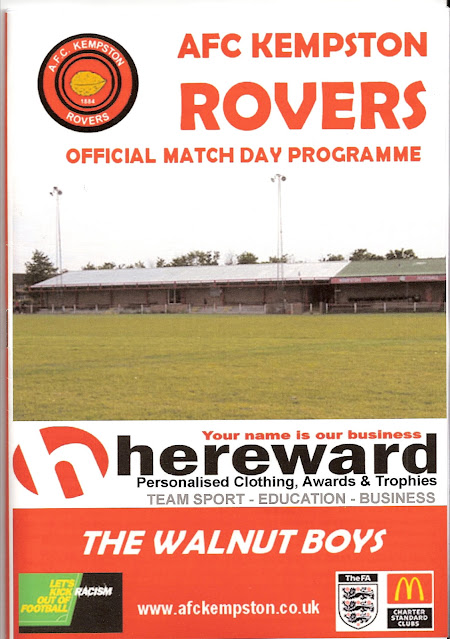