The village of Cogenhoe (pronounced Cook-know) overlooks the valley of the River Nene and is some five miles east of Northampton. Cogenhoe is situated on high ground overlooking the Nene Valley. It has grown into a large village with varied amenities including football, cricket and bowls clubs. People are believed to have lived at Cogenhoe for at least 4,000 years. Later on the Celts lived there. In the Roman period, a corn-drying kiln was built in the centre of the village and a villa estate developed out of an Iron Age settlement.

The early days of Cogenhoe United FC were not documented. The club was re-formed for the 1967-8 season, competing in the Central Northants Football Combination. By 1978 the club had progressed from the Second Division into the Premier Division. In a six year period thirteen winners' and six runners-up trophies were won. Development of facilities became paramount for promotion to the United Counties Football League. A lease on 3.6 acres of agricultural land was obtained from the Marquis of Northampton. Compton Park was now on the map and purpose-built facilities were developed with a spectator stand and the team gained promotion into the United Counties League in 1985. 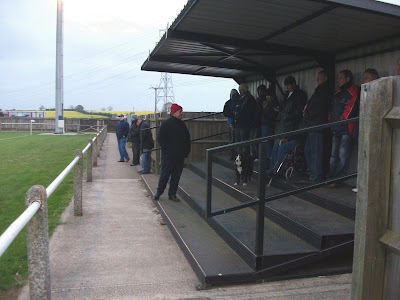 A Tuesday evening fixture at the back end of the season enticed us to Northamptonshire. Our route via the A10 and A1 demanded a refreshment stop. This was facilitated by Sainsbury’s at Biggleswade where a fine plate of fish, chips and mushy peas was washed down by a large mug of tea. Onwards, our route skirting Bedford was hindered slightly by a slow moving lorry. We still made it to Compton Park with time to spare. 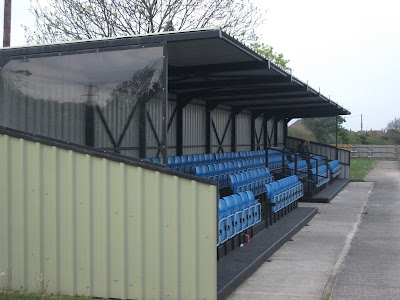 On a warm sunny day, I would imagine this venue to be a great place to watch football. The high setting and adjacent open countryside provide a picturesque setting. However, no such warm weather for the Pieman’s visit and on a distinctly chilly evening a woolly hat and rain jacket were pressed in to immediate service. 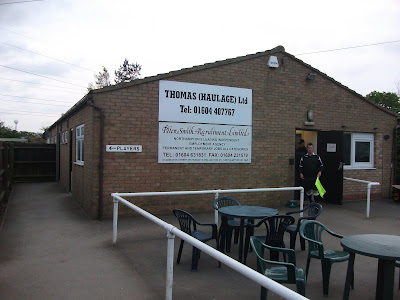 I liked Compton Park, a tidy ground and well looked after. Very impressive when considering how relatively small Cogenhoe is. On one side of the pitch is a covered seated stand, On the opposite side are the dugouts. Behind the goal at the clubhouse end of the ground is a small covered terrace area. For this match a dog watched proceedings from here and I got the impression that this was a regular occurrence. 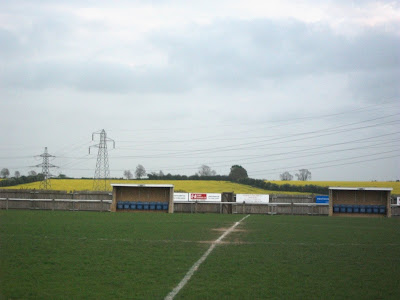 The clubhouse boasts a licenced bar and I did spot bottled real ale therein during the half time interval. There is also a refreshment window serving hot food (sausage rolls and scotch pies on this occasion) and drinks. The ground is fully enclosed although recent wind damage has brought down some of the fence at the far end of the ground. 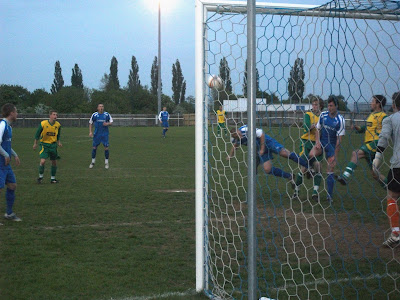 In difficult conditions, this local derby was played in good spirit. The home side took the lead through Tom McGowan. the visitors drew level courtesy of Adam Hancock. Overall this scribe believes the draw was probably a fair result. Our journey after the match was straightforward and I was back at Cheshunt for 11pm. 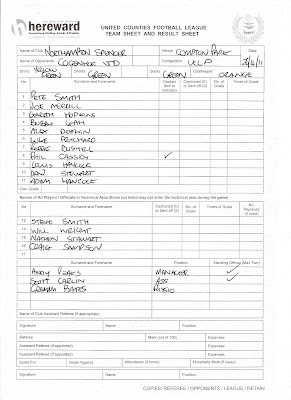 Admission: £5:00
Programme: No (something about a bank holiday and printers!) team sheet supplied at entrance
Attendance: 57
Tea: 75p