Dublin was originally founded as a Viking settlement; it evolved into the Kingdom of Dublin and became the island's primary city following the Norman invasion. The city expanded rapidly from the 17th century, and for a brief period was the second largest city within the British Empire and the fifth largest in Europe. After the Act of Union in 1801, Dublin entered a period of stagnation, but remained the economic centre for most of the island. Following the partition of Ireland in 1922, the new parliament, the Oireachtas, was located in Leinster House. Dublin became the capital of the Irish Free State and later of the Republic of Ireland. Dublin is situated at the mouth of the River Liffey. It is bordered by a low mountain range to the south and surrounded by flat farmland to the north and west. A north-south division has traditionally existed, with the River Liffey as the divider. 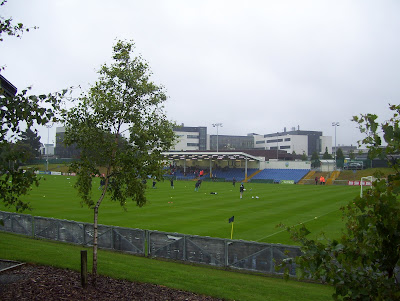 University College Dublin A.F.C. was founded in 1895 as the Catholic University Medical School Football Club. They began playing regular games the following year. A First XI played College games against other Universities and a Second XI entered outside competitions. The club was founder members of the Leinster Junior League in 1896 and reached the semi-finals of the Leinster Senior Cup in 1897. The club became University College Dublin when the new University annexed the Medical school in 1908. Since the 2008 season the club has played at the UCD Bowl, also home to the college's rugby team. 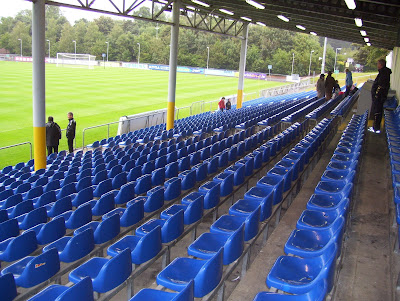 A reasonably cheap flight with Mr O'Leary from Stansted facilitated a lunchtime arrival in Dublin City Centre. For €6.20 we were able to purchase a Dublin Bus 'Rambler' ticket. This ticket enables a full day's travel on all Dublin Bus services including the fast 747 Airlink bus. The 747 route is toll (motorway and tunnel).


As had been forecast, it was a very wet day in Dublin, so much so that this scribe was forced to take refuge in a couple of city centre pubs. It would have been rude not to partake in sampling the stout (purely for research purposes - Ed) and this Pieman was happy to comply. Having checked in to the Phoenix Park Travelodge, we continued to use our Rambler ticket to get back to the centre and then outwards to the UCD campus at Belfield. There is a bus terminus within the Campus, served by a couple of routes, but many other services also pass the entrance to the site. 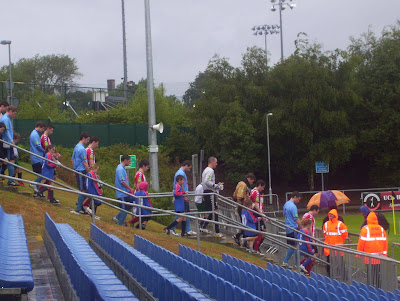 Our concerns that the match might be in doubt due to the heavy rain were allayed on sight of the excellent playing surface at the UCD Bowl. There was absolutely no surface water on a pitch that must have excellent drainage. The pitch would not be out of place at the highest level - it was that good. It was interesting to see that 3 other matches (Bohemians, St. Patricks Athletic and Shelbourne) also took place in Dublin on the same night. 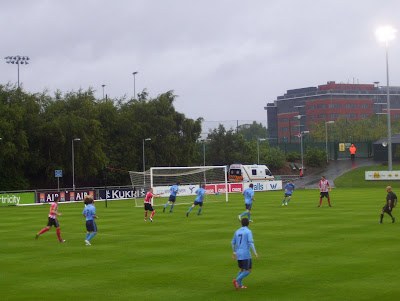 On such a wet occasion the covered seated stand, was a very welcome facility. There was a good atmosphere within and the travelling fans from Derry were in fine voice. My pick from their repertoire being their rendition of Teenage Kicks. The stand is the only spectator viewing facility at the ground. 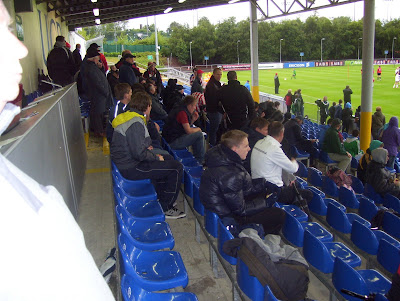 The college side has been struggling this season, conceding six goals in the previous home match. By contrast, Derry City is having a good season and would most likely have been confident of all three points from this match. Indeed the visitors took the initiative with some storming attacking play early on, only to find Ger Barron, the UCD stopper, in fine form. Gradually UCD started to play their way in and in the solitary minute added on to the first period, Dean Marshall fired home. 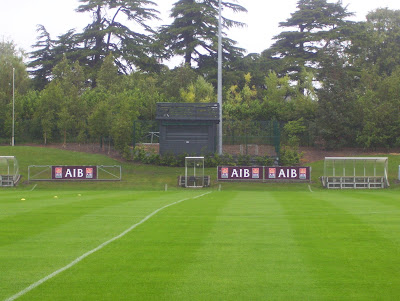 Danny Lafferty's headed goal for Derry on 65 minutes was immediately followed by another for UCD as Graham Rusk charged up field to fire home. In truth the shot from the edge of the box was fumbled by Gerard Doherty before crossing the line. UCD looked to be on the way to three points but Scotsman Stewart Greacen's diving header on 84 minutes levelled the match. This Pieman believes a draw to be a fair result. 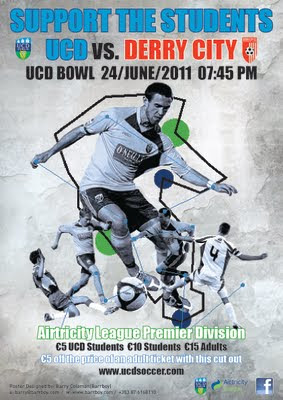 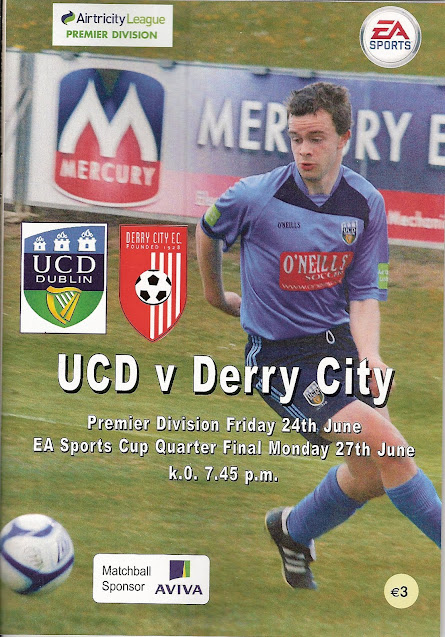 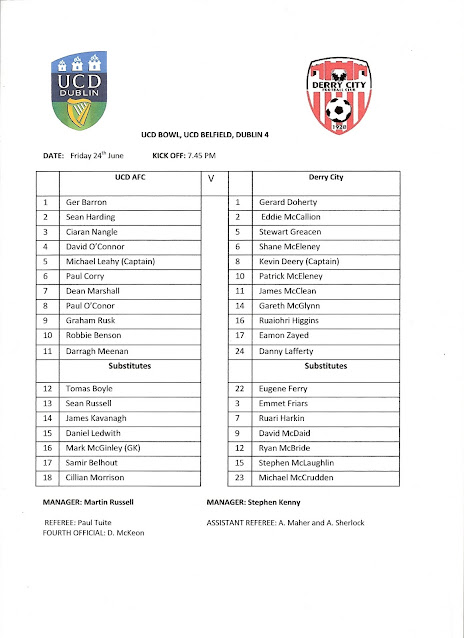