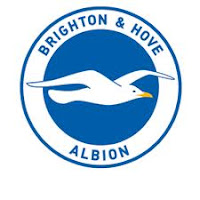 Brighton is located on the south coast of England, and together with its immediate neighbour Hove forms the city of Brighton and Hove. The seafront has bars, restaurants, nightclubs and amusement arcades, principally between the piers. Being less than an hour from London by train has made the city a popular destination, especially with big party groups. Brighton beach (includes a nudist area) contains shingle up to the mean low tide mark and has been awarded a blue flag. The Monarch's Way long-distance footpath heads west along the seafront above the beach. Since the 1978 demolition of the open-air lido at Black Rock, the most easterly part of Brighton's seafront, the area has been developed and now features one of Europe's largest marinas. 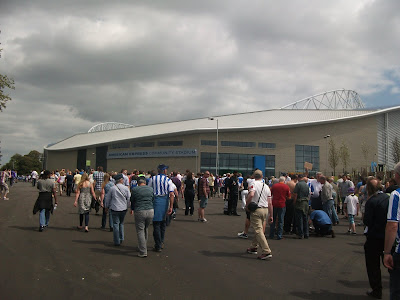 For many years Brighton and Hove Albion FC was based at the Goldstone Ground in Hove, until the board of directors decided to sell the stadium. The sale, implemented by majority shareholder Bill Archer and his chief executive David Bellotti, proved controversial, and the move provoked widespread protests against the board. The club received little if any money from this sale. For two years, from 1997–99, the club shared the ground of Gillingham, before returning to Brighton to play at Withdean Stadium. 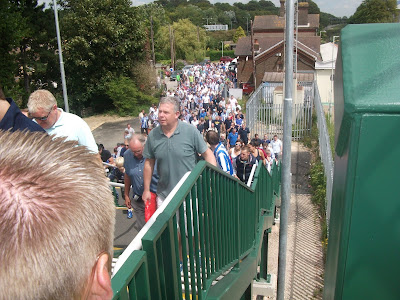 On 28 October 2005 the Office of the Deputy Prime Minister announced that the application for Falmer had been successful, much to the joy and relief of all the fans. Lewes District Council contested John Prescott's decision to approve planning permission for Falmer, forcing a judicial review. This was based on a minor error in Prescott's original approval which neglected to state that some car parking for the stadium is in the Lewes district as opposed to the Brighton & Hove unitary authority. This caused further delay. Once the judicial review ruled in favour of the stadium, Lewis District Council said that they would not launch further appeals. Building of the 22,500-seater Falmer Stadium started in December 2008. On 31 May 2011 the club officially completed the handover and were given the keys to the American Express Community Stadium, signifying the end of 12 years without a home. 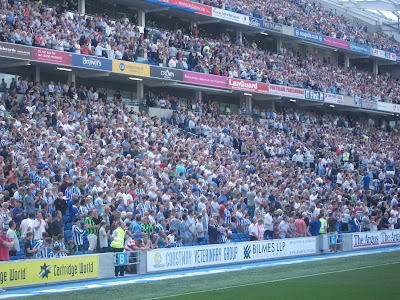 Remarkably there was a special offer on Southern trains which meant that single fares to/from Brighton, could be purchased for 45p with a railcard discount applied. Our carriage from London Victoria was shared with the Millwall Ladies Rugby Club, en-route to a sevens tournament at Worthing. On arrival at Brighton, we headed for the Post & Telegraph for the big Wetherspoon breakfast. Whilst at this establishment, your Pieman enjoyed Brighton Blonde 3.9% from W J King and BOB 4.0% from the Wickwar Brewing Co. 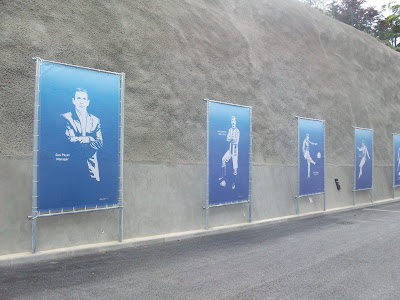 On a warm day it was good to call in at the Lord Nelson, where Harvey's Sussex Bitter 4.0% was in fine form. A few doors along at the Prince Albert, I opted for Hophead 3.8% from the Dark Star Brewing Co. Along with the earlier WJ King offering, this was turning out to be a fine day for Sussex ales. 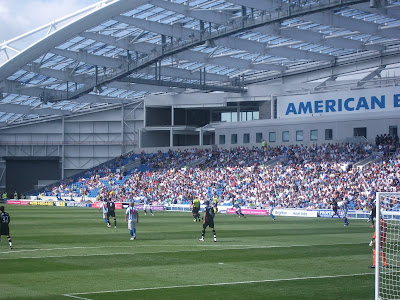 The Falmer Stadium (American Express Community Stadium as per sponsorship) is impressive and has been built with expansion possible. The Main (West) Stand is the showpiece area. A tiered structure with corporate dinning facilities, it must be dreamland for those Brighton fans that endured the Withdean and Gillingham era following the loss of the Goldstone Ground. 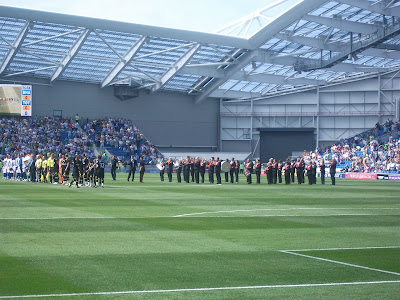 At the Quadrant there was time for a couple of pints of Partridge 4.0% from the previously recorded Dark Star Brewery. Towards the station at the popular hostelry, The Evening Star, further Dark Star ales were consumed in the form of American Pale Ale 4.8% and Carafa Jade 5.0%. Catching the 20:19 back to London Victoria concluded an excellent day out. 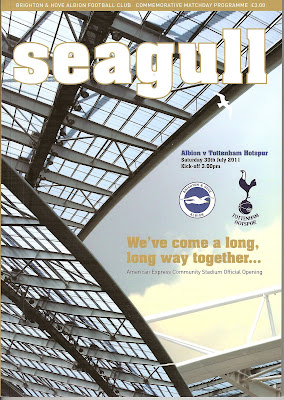 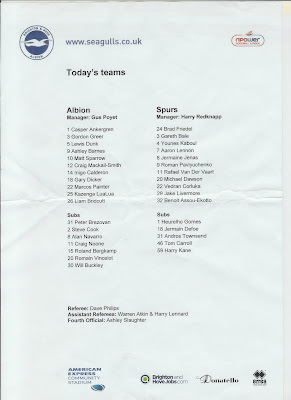