Thessaloniki, which is one of the few Greek cities to have experienced constant cultural development, has continuously played a significant role in both Greek and world history. For over 4000 years, from the 3rd millennium B.C. up to the present day, Thessaloniki has been a city which has attracted the interest of both specialists and the general public. Visitors to the city can enjoy the combination of aesthetic delight, historical and archaeological knowledge and natural beauty. When king Cassander of Macedonia founded Thessaloniki in 315 B.C, on the site of the Ancient Greek town of Therme, joining 26 townships at the head of the gulf bearing the same name, he named the city after his wife, the half-sister of Alexander the Great. The city subsequently gained the reputation of being "Mother of all Macedonia", a commercial centre possessing connections with all the ports of the East, its own coinage and a cultural development equal to that of the other Greek cities. 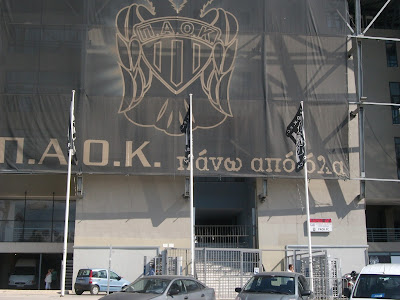 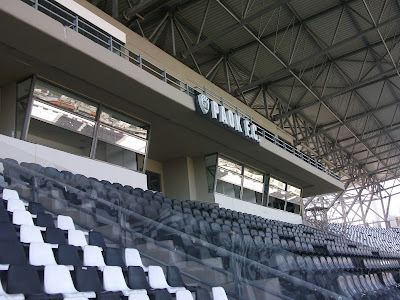 For this first group stage match, we flew from London Heathrow on the Tuesday evening, via Zurich, with Swiss Air. There is a 24-hour bus service from the airport to Thessaloniki centre (route 78 & N78). The fare is 90c (slightly cheaper if you buy a ticket in advance). Our arrival was in the early hours. Accordingly, we were looking to explore Thessaloniki that afternoon. This Pieman was keen to sample the locally brewed beers and with the exception of Fix found them to be pleasantly palatable; in particular Axa, Mythos and Verginia. This being the day before the match, we took the opportunity to visit the city’s stadiums. We started at the Olympic Stadium, the nearest to the centre. This stadium is predominantly an athletics venue. It was surprising to see so many people running during the mid afternoon heat (39° C) but I guess they know what they are doing! 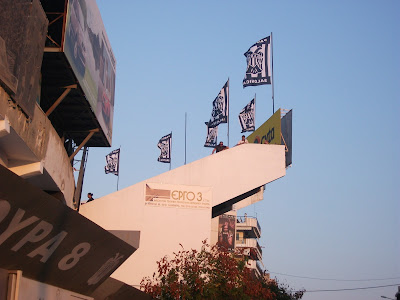 After one of many leisurely refreshment stops, we moved on to the Toumpas Stadium, the venue for the following evening’s entertainment. During the day time (at least on Wednesdays – Ed), the road in front of the main stand, hosts a rather smelly street market. At the time of our arrival they were clearing away but in doing so the still air was extremely fishy! We were able to enter the ground to take photographs and witness the rehearsal of the laying of the Europa League flag at the centre of the pitch. Complete nonsense in my opinion but people seem to like the hyped up tripe! The stadium is uncovered with the exception of the main stand but affords a good view of the pitch from all areas. 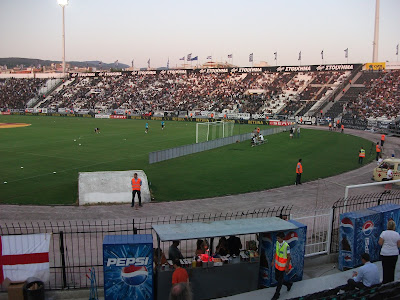 A short amble through the streets (20 minutes) led us to the Kleanthis Vikelidis Stadium, the ground of archrivals Aris Salonika. With a capacity of 22,800, this venue is compact, when compared to the bowl at PAOK. Once again we were allowed access to the ground and picked up match programmes from the previous weekend home fixture v Atromitos (0-1). On such a hot day, it was nice that the club provided  some cold refreshing water to help me on my way. 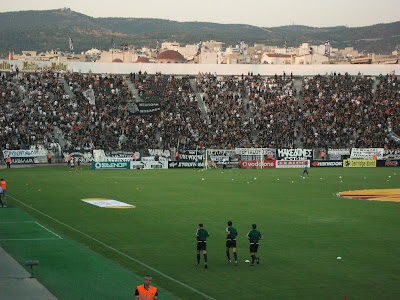 By the evening of the match, there was no evidence of the smelly street market outside the ground. There was a vibrant atmosphere in the stadium, particularly in the period immediately prior to the match. The home support was choreographed in reaction and song, reminiscent but not quite matching that witnessed at Besiktas. An eventful 90 minutes failed to produce a goal but there were a number of chances for both teams. PAOK thought they had taken the lead from the spot but when forced to retake they failed. Tottenham Hotspur’s gamble in fielding a shadow XI was not punished as they more than matched their hosts. 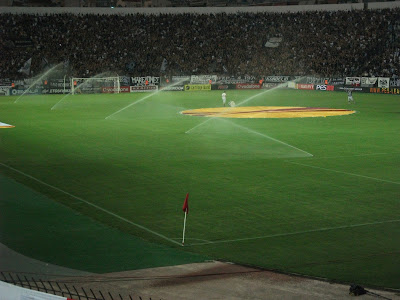 Afterwards we were bussed back to the centre of town following a lengthy lock in. Our return flight the following morning, involved a change at Dusseldorf, where some large beers facilitated this Pieman’s acclimatisation back into Northern Europe mode. 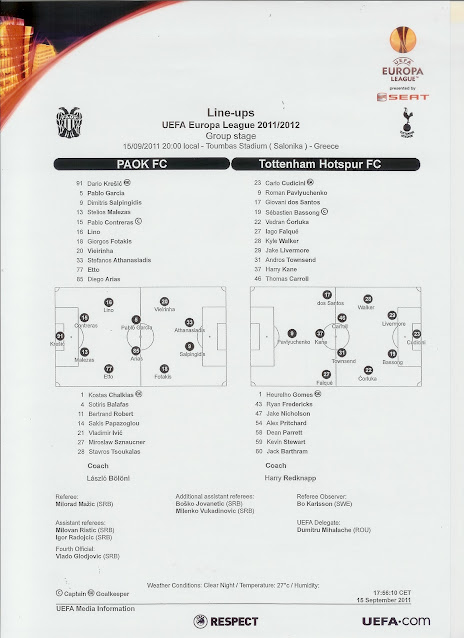