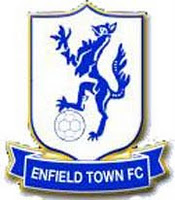 Enfield Town used to be a small market town in the County of Middlesex on the edge of the forest about a day's travel north of London. As Greater London has grown, Enfield Town and its surrounds have become a residential suburb. The current borough was formed in 1965 from the former area of the Municipal Borough of Southgate, the Municipal Borough of Enfield and the Municipal Borough of Edmonton. The armorial bearings of these three boroughs were also merged. The world's first solid state circuitry colour televisions were manufactured by Ferguson at their now closed plant in Enfield. The very first Dishwasher to be mass produced was in Hotpoint's now closed Enfield plant. Good Bobwin's Chauffeur, Steve Martin, attended the local Ambrose Fleming School. 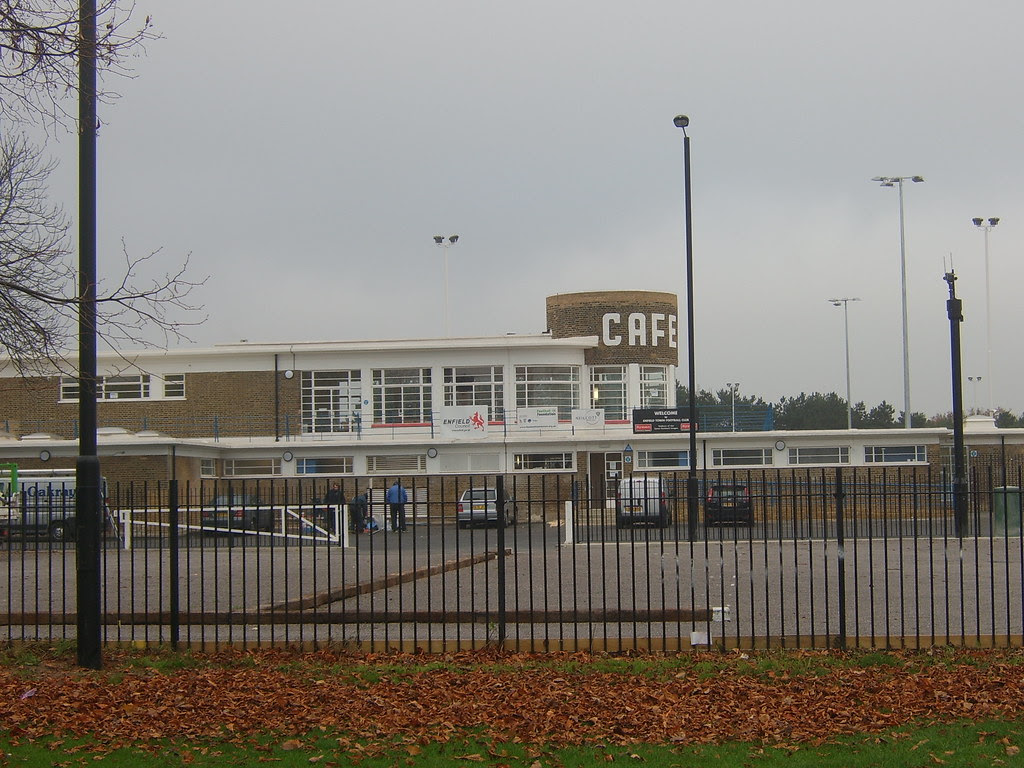 Barclays Bank in Enfield was the first place in the world to have an ATM or cash machine, it was officially opened in June 1967 by Reg Varney a television actor and personality most famous for his lead role on the comedy series On the Buses. Enfield Town FC was founded on 23 June 2001 by the Enfield Supporters' Trust after Trust members considered that the regime in charge of Enfield FC no longer had the interests of the club at heart and lacked sufficient will to bring about the return of the club to its home town, having left Southbury Road in 1999. The club originally played at Brimsdown Rovers' Goldsdown Road ground. In October 2008, Enfield Council announced a deal with the club allowing them to relocate to the Queen Elizabeth Stadium, close to Enfield's old Southbury Road ground. At the end of the 2009–10 season the club was awarded a grant of £81,504 by the Football Stadium Improvement Fund towards the first phase of works on the new ground. 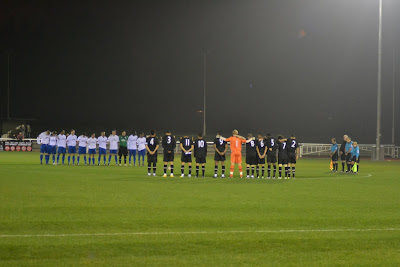 After spending the first few months of the 2011–12 stadium ground-sharing at Cheshunt, they moved into the Queen Elizabeth II Stadium in November 2011, with the first match being a victory against Harefield United in the Middlesex Senior Cup. 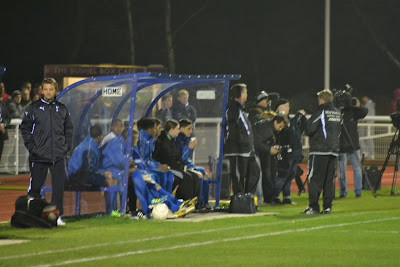 I travelled to the match by car but can confirm that this venue is within easy walking distance of both Enfield Town and Southbury stations. In addition buses 217 and 317 stop a couple of minutes walk from the stadium. Alight at the Cambridge Gardens stop. The nearest pub (there is also a licensed bar in the stadium – Ed) is the Halfway House (Toby Carvery). Our correspondent Paul Throp reports decently priced real ale on this particular evening. The pub is a short walk from the stadium at the A10 junction with Carterhatch Lane. Behind the pub is Donkey Lane which is the approach road to the stadium. 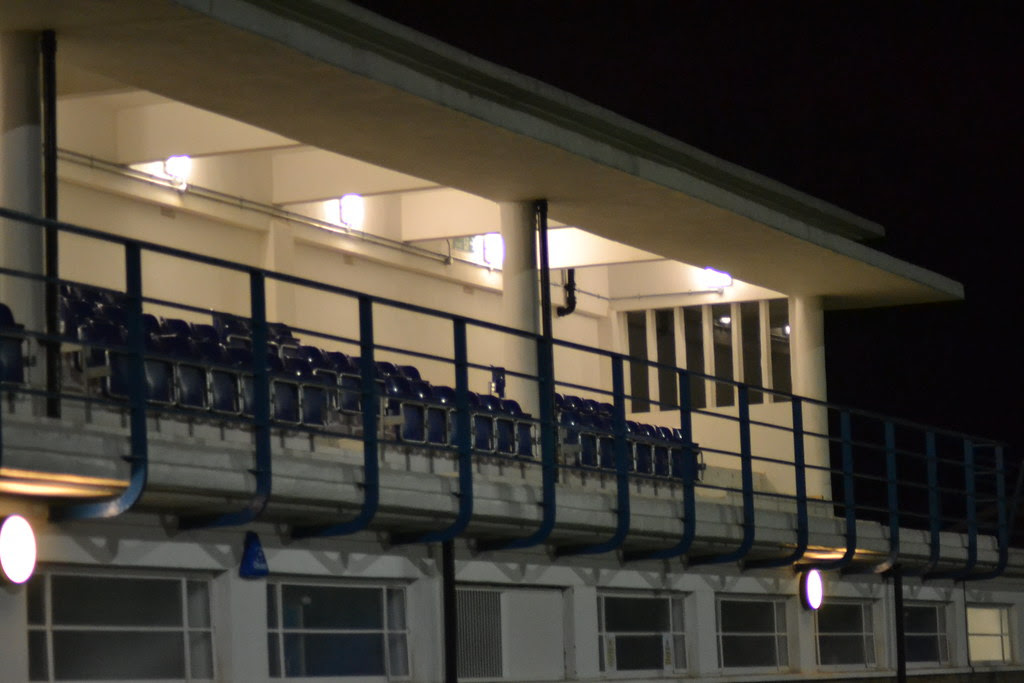 Like many, I am not a great fan of football within athletics arenas. However, it has to be said that Enfield Town FC has done a tremendous job in reducing the impact of this. Both covered end terraces are within the track, providing the potential for a far better atmosphere and view. The playing surface also deserves a mention, as it was particularly good. 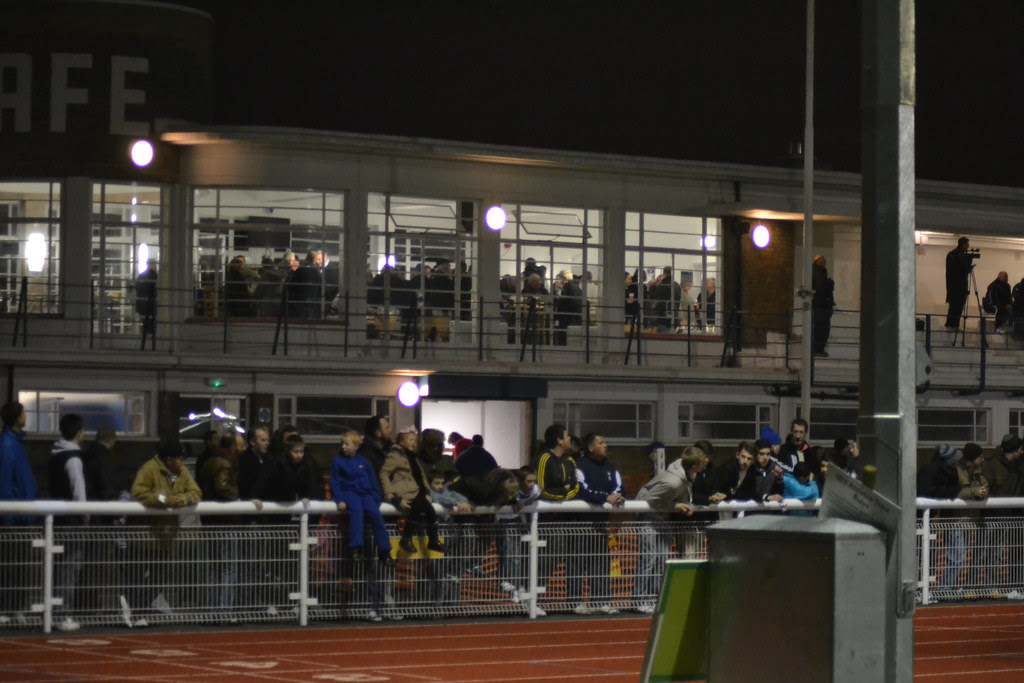 There are also covered seated stands on either side of the pitch outside the track. The main area being part of the existing Grade II listed pavilion and grandstand. The art deco structure reminded one fan of Southgate station. It was designed in 1939 and opened in 1953. Groundtastic reports that this is one of only two Grade II listed structures currently hosting non-league football. Great Yarmouth Town’s Victorian grandstand being the other.

Enfield Town FC will have been pleased with their win over a very youthful Spurs side. They will also hope that many of the near 1000 crowd will venture back along Donkey Lane in the future to watch this supporter trust based club play just a few hundred yards away from their spiritual Southbury Road base. It really was not that long ago that the original club was the top non-league side in the country. Twice winning the conference before the days of automatic promotion to the Football League. 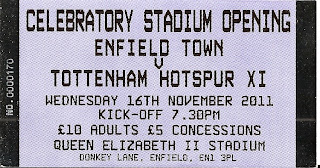 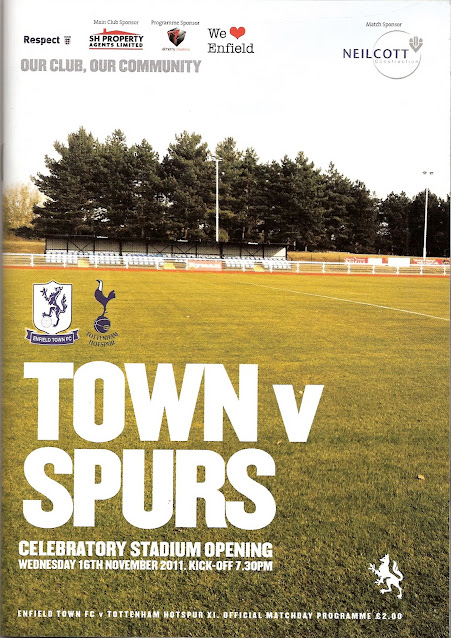