Droylsden is a town within the Metropolitan Borough of Tameside, in Greater Manchester. It is 4.1 miles to the east of Manchester city centre, and 2.2 miles west-southwest of Ashton-under-Lyne. Historically a part of Lancashire, Droylsden grew as a mill town around the cotton mills established in the mid-19th century, and the Ashton and Peak Forest canals. Beginning in the early 1930s, Droylsden's population expanded rapidly, as it became a housing overflow area for neighbouring Manchester. Robertson's Jam was a significant employer in the area. The factory was established in 1891, on the banks of the Ashton Canal, on Ashton Hill Lane. At its peak it employed around 1,000 workers; that number was reduced to around 400 before closing during 2008. The factory was demolished during the early part of 2010.

Droylsden FC was originally formed at the invitation of Kenneth Sadd, the landlord of the Butchers Arms public house, to play behind the pub. After twenty years of friendlies and local leagues, disbandment, reformations and changes of strip, the club emerged from World War I the sole survivors amongst the village teams, and as members of the Manchester League. The club also adopted their now traditional colours of red and white, the inspiration for the unusual nickname of The Bloods. 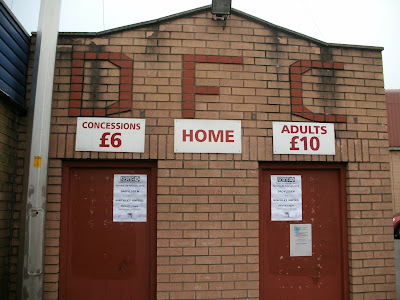 This month the Metrolink tram service in Manchester has been extended to Droylsden, which facilitated a very straightforward journey. The current terminus is only three minutes walk from the Butchers Arms. An earlier trip out to the ground enabled some daylight photographs. On returning about an hour before the match I popped into the adjacent Kings Arms for a decent pint of Joseph Holt bitter (£2.25). 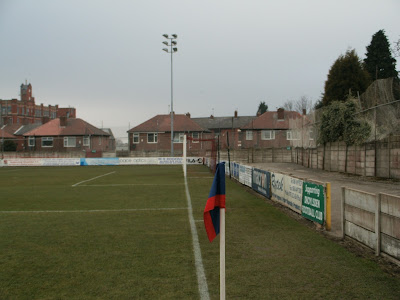 The ground is very much a mixture of old and new. A fine tall seated grandstand is situated alongside a new looking clubhouse building. Behind one goal is a smart covered terrace. The other end has no banking with the remaining side being partly occupied by another covered terrace; this structure is a lot older and appears ‘worn out’. The latter two areas back on to domestic dwellings, which, despite high fencing and netting, will have seen many wayward footballs over the years. 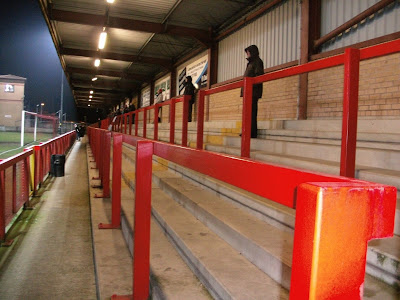 This match was postponed from Saturday 26 January and the match programme was used for this rearranged match. However, it was issued free of charge. On a progressively cold evening, I was keen to see how the bottom two teams would fare when pitted against each other. 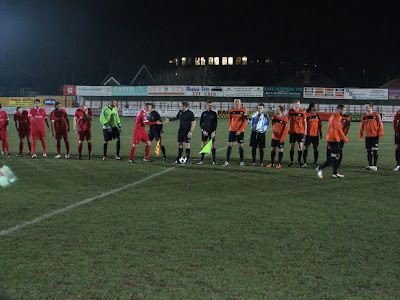 Visitors Hinckley United played very well and I certainly would not have seen them as a struggling outfit. Their first half performance merited more than their solitary goal and this was to prove costly. The home side improved and levelled in the second period and took the lead late in the match. Hinckley equalised only to see Droylsden snatch victory in the closing minutes. 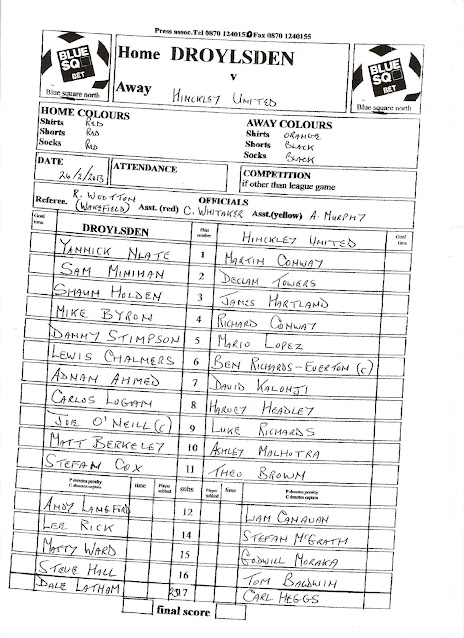 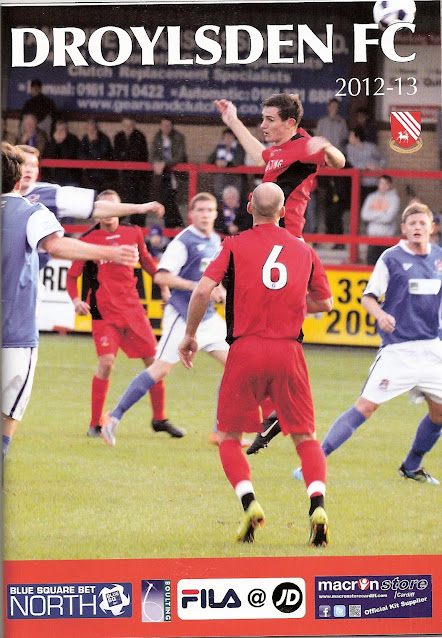