The name of the Bedford is thought to derive from the name of a Saxon chief called Beda and a ford crossing the River Great Ouse. Bedford was a market town for the surrounding agricultural region from the early Middle Ages. The Anglo-Saxon King Offa of Mercia was buried in the town in 796. In 886 it became a boundary town separating Wessex and Danelaw. It was the seat of the Barony of Bedford. In 919 Edward the Elder built the town's first known fortress, on the south side of the River Ouse and there received the area's submission. This fortress was destroyed by the Danes. William II gave the barony of Bedford to Paine de Beauchamp who built a new, strong castle. The castle was razed in 1224 and today only a mound remains. Bedford remained a small agricultural town, with wool being an important industry in the area for much of the Middle Ages. From the 16th century Bedford and much of Bedfordshire became one of the main centres of England's lace industry, and lace continued to be an important industry in Bedford until the early 20th century. 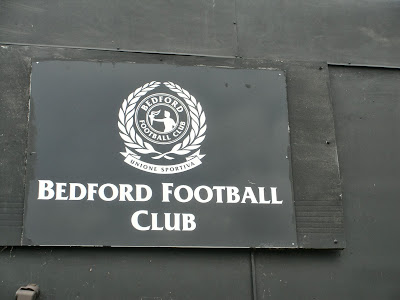 The football club was founded in 1957 as the works team of printers Diemer & Reynolds. Founder member, the late Jim McMullen, is remembered in the name of the ground, McMullen Park. The club first played on a local works pitch, then moved to nearby Cople before settling at Allen Park, Bedford. They then moved to Fairhill, Clapham Road and played there until Sainsbury’s bought the land. As part of the deal with the Council the club was relocated to Hillgrounds, Kempston until moving to the present ground in 1996. Bedford United entered into a trial merger with Bedford Town in 2000, but season 2001–02 saw them back with their own administration. After protracted discussions with a local football club, US Valerio, the two clubs decided to join forces and become Bedford United & Valerio FC for season 2002–03.Formerly known as the Unione Sportiva Valerio, the name coming from the Italian for “Sporting Union”, plus the surname of the founder Mr. Nicola Valerio, US Valerio started in 1985 in the Michael R Peters Sunday League achieving relative success over the years. US Valerio won the Harrison & Rowley Cup in season 2005–06. It did not get into junior and youth football until the 2000–01 season when four teams were entered into the former Bedford Chesham League. A full merger between Bedford United and US Valerio was completed at the end of 2005–06 season and for 2006–07 the club used the name of Bedford Valerio United FC. With the demise of the Valerio Group in 2007, the club decided to adopt the shortened name of Bedford Football Club from 2007–08 onwards. 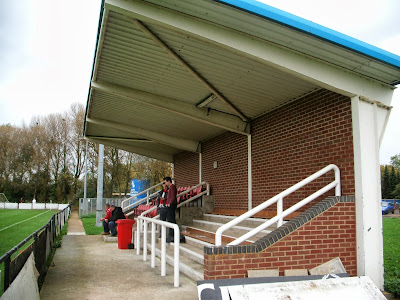 I was fortunate to be offered a lift to this venue by a fellow enthusiast and the journey from Cheshunt took little over an hour. McMullen Park is located in the Cardington district of Bedford. A noticeable and easy to spot landmark in the area is the former RAF Cardington airfield with two enormous aircraft hangers dominating the landscape for the surrounding miles. On arrival at McMullen Park we adjourned to the refreshment area (portakabin) for a decent cup of tea. Hot food in the form of burgers is available here along with confectionery and a selection of canned or bottled beer and cider. 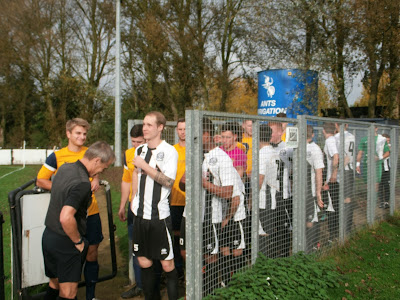 Along one side of the pitch is a covered stand, half of which is given to seating whereas the remainder offers a good terraced view. Almost adjacent to this is something that I would describe as a rather peculiar structure. It appears to be half a portakabin and I’m not sure if it still has any use. I guess it can operate as an overspill area in poor weather should the stand be full. The only other structures by the pitch are the dug outs on the opposite side. McMullen Park is next door to The Eyrie, home of Bedford Town FC 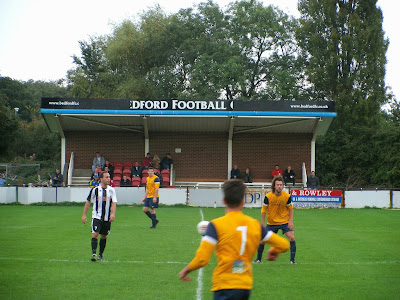 This match saw 5th placed Bedford take on 9th placed Harpenden Town; the current form of the two sides was reflected in a first period that saw the hosts create most of the openings. However, the first half ended without a goal and the visitors were battling hard to stay on level terms. The second period was certainly livelier and more than a bit of niggle crept in between both sets of players. Eventually Bedford made the breakthrough taking the lead with a fine drive from the right which gave the keeper little chance. 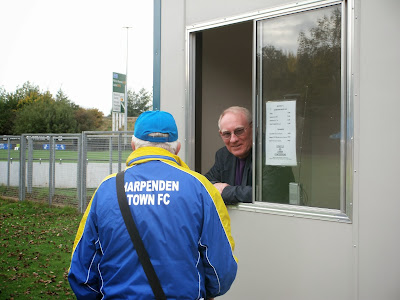 Two further strikes for the home side ensured that the points went to Bedford. Overall this was a deserved win but as a neutral I felt that some of the fouls and poor behaviour in the latter period of the second half was completely out of keeping with the match. That said, it was still a decent match played on a fine autumnal day. 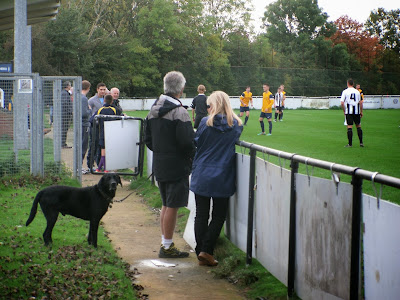 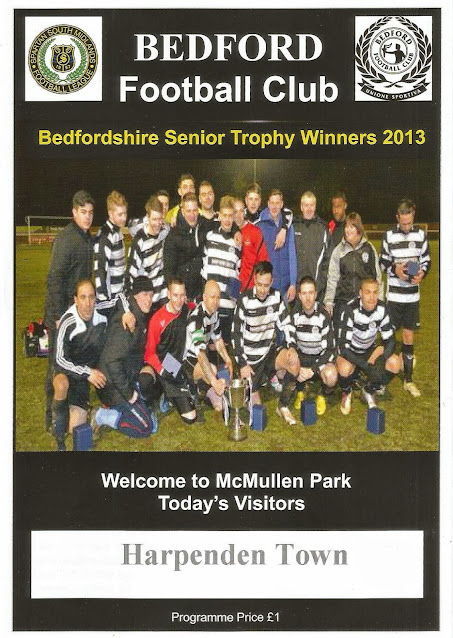 Admission: £5:00
Programme: with admission or £1:00 if purchased seperately