The name Barnet derives from an ancient settlement, recorded as Barneto c.1070, Barnet 1197, La Barnette 1248, that is 'the land cleared by burning', from Old English bærnet, referring to the clearing of this once densely forested area in early times. In Saxon times the site was part of an extensive wood called Southaw, belonging to the Abbey of St Albans. The name of the town appears in early deeds as 'Bergnet' - the Saxon word 'Bergnet' meant a little hill. Barnet's elevated position is also indicated in one of its alternative names ('High Barnet'), which appears in many old books and maps. According to local belief, though not verified, "Barnet stands on the highest ground betwixt London and York." The area was historically a common resting point on the traditional Great North Road between the City of London and York and Edinburgh. St John the Baptist Church (built 1560), which stands in what was the centre of the town, was erected by John de la Moote, abbot of St Albans, about 1400, the architect being Beauchamp. Playing on its antiquity, it continues to call itself "Barnet Church", although this is not an official title. 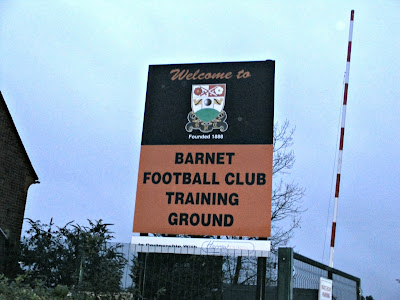 Barnet FC’s current crest was designed in the 1950s and contains the green hill of High Barnet and the red rose, white rose and crossed swords representing the 1471 Battle of Barnet, a pivotal battle in the Wars of the Roses. The badge was designed by Sidney Robert Price who was the chairman of the club at the time. The club's nickname of "The Bees", reflected in their amber and black shirts, is likely to have come from the location of apiaries close to the Underhill ground in the early years of the 20th century. 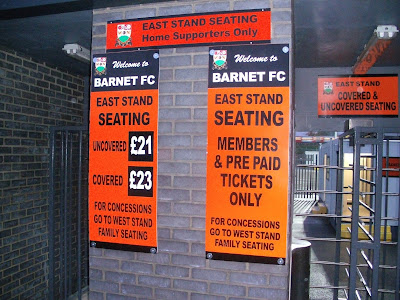 Between 1907 and 2013 they played at Underhill Stadium, situated within the London Borough of Barnet. The club moved to The Hive, situated in Canons Park in the London Borough of Harrow, for the 2013–14 season. This Pieman decided to visit the new place for a televised league fixture v Cambridge United. En route to the new venue I detoured past the old place and came across a Hungarian Edgar Davids fan, keen to secure his hero’s autograph. My new friend seemed rather pleased that I was able to assist him in getting to The Hive. I do not know if his quest was satisfied but he told me that he only wanted the autograph and had no intention of watching the match!


Previously Barnet’s training ground, The Hive has been transformed into a well-appointed stadium for this level of football. At each end of the stadium is a narrow covered terrace. The North Stand is for Barnet supporters, whereas the South Stand is for visitors – on this occasion heaving with the masses from Cambridge.

The East Stand contains a seated area and backs on to the club’s administrative facilities, containing offices, restaurant, bar and the changing rooms. The larger West Stand is the main seating area for the stadium, of which the far north corner is allocated to the away support. Behind this stand runs the Jubilee Line underground line and Cannons Park station is around five minutes walk from the ground. 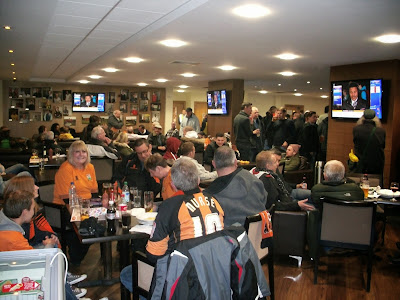 This match saw Barnet, just beneath the play-off places, host top off the table Cambridge United. The visitors looked like living up to this top billing when they went two goals ahead. However, this inspired the home side and Barnet were level before the break. The Bees should have secured all three points and were unlucky when a late strike was controversially ruled out.  A decent entertaining match. 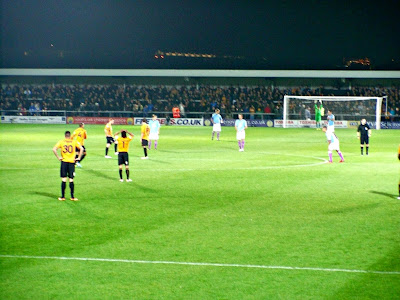 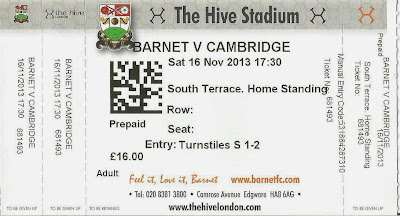 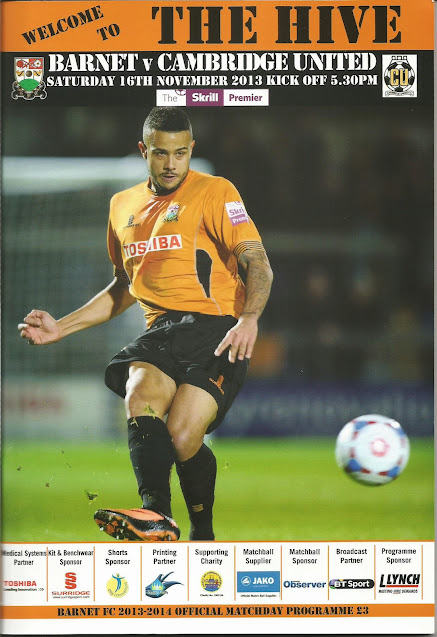 Subsequent visit to The Hive