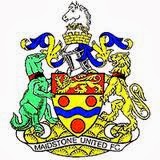 Maidstone is the county town of Kent, England, 32 miles south-east of London. The River Medway runs through the centre of the town, linking it with Rochester and the Thames Estuary. Historically, the river was a source and route for much of the town's trade as the centre of the agricultural county of Kent, known as the Garden of England. There is evidence of a settlement in the area dating back to beyond the Stone Age. Maidstone's economy has changed over the years from being involved in heavy industry, to more light industry and service industries. During the English Civil War, the Battle of Maidstone took place in 1648, resulting in a victory for the Parliamentarians. Andrew Broughton, who was Mayor of Maidstone in 1649 (and also Clerk to the High Court of Justice) was responsible for declaring the death sentence on Charles I, and today a plaque in Maidstone Town Centre memorialises Broughton as 'Mayor and Regicide'. 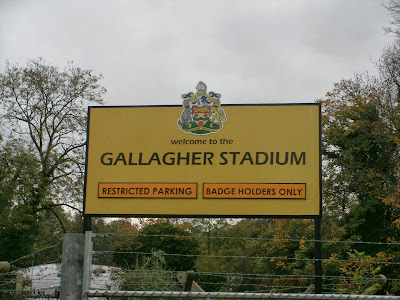 Maidstone United FC filled the void left by the old Maidstone United club, which was a member of the Football League between 1989 and 1992. That club was forced out of the league through bankruptcy but the nucleus of a new club was built around the youth squad. Maidstone Invicta were originally a youth team but made the step up to adult football in 1992 being elected to the Kent County League Fourth Division in 1993 and subsequently progressed through the non-league pyramid. They changed their name to Maidstone United in 1995. They currently play in the Isthmian League Premier Division having been promoted from the Isthmian League Division One South in 2013.

Since their creation, Maidstone United FC was without a stadium of their own, until at the start of the 2012-2013 season the Gallagher Stadium was opened. The club shared grounds with Dartford, Sittingbourne and Ashford in the interim. An opportunity to visit the new place presented itself on this gloomy November Saturday. Rain had meant that other options might be less fruitful and the 3G pitch at Maidstone meant a high degree of certainty that this match would go ahead. 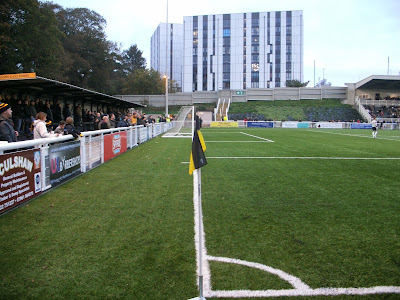 The journey clockwise around the M25, crossing the bridge at Dartford was straightforward, as was the onward adventure along the M20. The directions on the club website are accurate and on arrival in the town centre, we were very close to the stadium. There is no parking at the ground for casual visitors but plenty of secure parking within a few minutes walk. For a town centre, £1:40 for three hours provided good value. 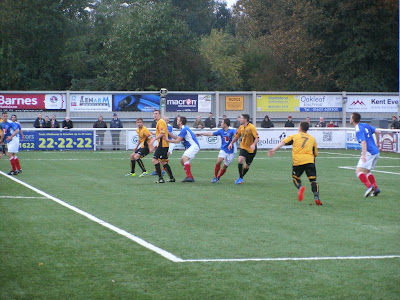 The stadium is impressive with covered terraced areas at each end of the ground. An elevated seated stand is situated along one side of the pitch along with the club bar, changing rooms and administrative building. The only structures on the opposite side of the ground are the dugouts. It is possible to stand all around the ground. 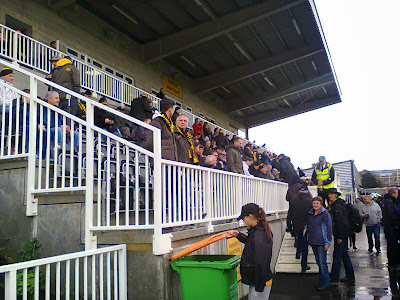 This match pitted top of the table Maidstone against a struggling Leiston. It was not unreasonable to expect the home side to win comfortably. However, as we often find, football is not like that and the Suffolk side had clearly not read the script. Leiston were by far the better side in the first half and this superiority was rewarded with goals from David Head on 28 minutes and four minutes later Gareth Heath doubled the advantage with a penalty. 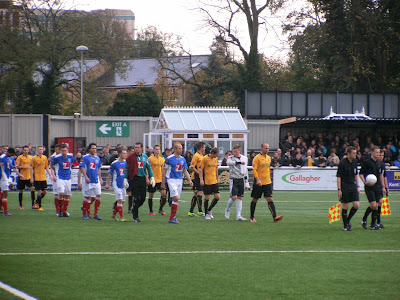 It was obvious that Maidstone would be more of a threat in the second period as they chased the game but the impressive Leiston outfit looked capable of adding to their tally on the counter attack. When it seemed that three points would be heading to Suffolk the game changed dramatically. Tom Phipp grabbed a headed goal for the home side on 76 minutes and in time added on (it was almost 5pm) Charley Robertson scored with a deflected effort to ensure that the match was drawn. This was a very entertaining match for neutrals but I did feel sympathy for Leiston as for me they would have deserved the win for their positive and spirited play. 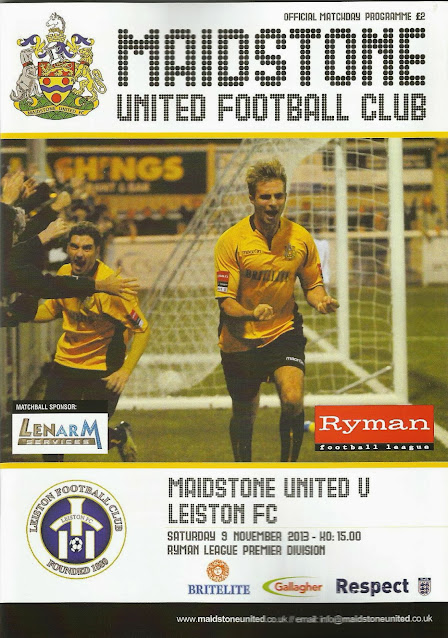