Tromsø is a city and municipality in Troms county, Norway. Most of Tromsø, including the city centre, is located on the small island of Tromsøya in the county of Troms, 217 miles north of the Arctic Circle. The city centre of Tromsø contains the highest number of old wooden houses in Northern Norway, the oldest house dating from 1789. The Arctic Cathedral, a modern church from 1965, is probably the most famous landmark in Tromsø. The city is a cultural centre for its region, with several festivals taking place in the summer. The area has been inhabited since the end of the ice age. Archaeological excavations in Tønsvika, just outside the city limits, have turned up artefacts and remains of buildings estimated to be 9-10,000 years old. The Norse chieftain Ohthere, who lived during the 890s, is assumed to have inhabited the southernmost reaches of today's Tromsø municipality. He described himself as living "furthest to the North of all Norwegians" 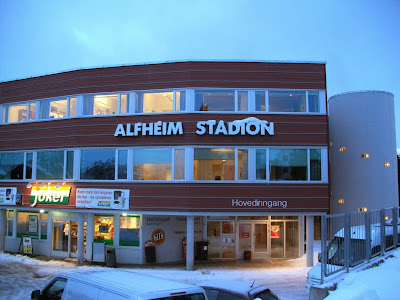 The football club was founded on 15 September 1920, and given the name Tromsø Turnforenings Fotballag. In 1930, the club changed its name to Tromsø Idrettslag, because the Norwegian Sports Association thought the club's name was too close to the name of Tromsø Gymnastics Association. This was only temporary, though, and the club changed its name to Tor in 1931. The year after, the Norwegian Sports Association ruled that the club could not be named Tor, and so Tromsø Idrettslag was again chosen, this time permanently. The club plays at the 6,859 capacity Alfheim Stadion. 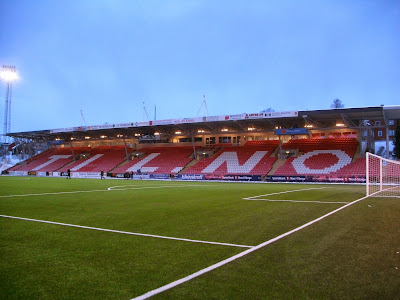 Alfheim Stadion has a playing surface made of artificial turf with under-soil heating. It had natural grass until 2006. However, the condition of the pitch, especially during the winter months, received considerable criticism from sports pundits and visiting managers. Usually in October, when the Norwegian Premier League is in its last rounds, winter sets in Tromsø. This, along with the wear and tear from football matches and practicing sessions, caused the grass to disappear and reduced the pitch to a muddy field. To make up for this, Tromsø I.L. installed artificial turf at the stadium. 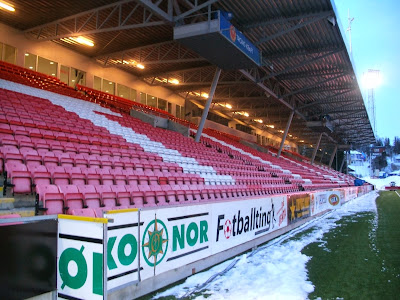 It was necessary to fly via Oslo, as direct flights from London to Tromsø do not operate on a daily basis. On arrival we were greeted by a blanket of snow which would be a permanent feature for the duration of our stay. Walking about town was not easy and a softer option was to adjourn to a pub to enjoy the locally brewed Mack beers. This Pieman successfully sampled three different varieties and was suitably refreshed. 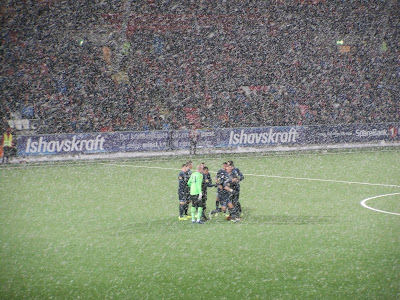 On the morning of the match, I ventured up to the stadium to take some photographs and collect some match programmes. The latter was achieved via the club offices and was, on reflection, a smart move, as none appeared to be available at the match! Throughout the day, snow was being cleared from the playing area and the club appears to be extremely well organised in this respect. In the afternoon, this Pieman and others took a cable car ride to Stosteninen (Big Rock), 421 meters above sea level. From here we experienced a stunning view of the town and surrounding area. 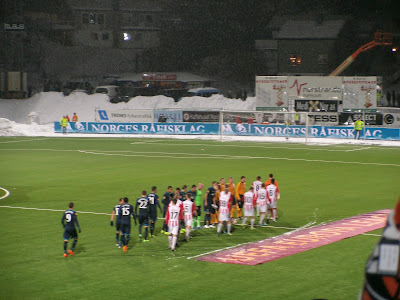 The only spectator facilities at the stadium for the match were two seated stands along the sides of the pitch. Both are covered and offer a decent view. There is an uncovered seated stand behind one of the goals but this was not in used for the match.

The Norwegian domestic league had already been completed; leaving Tromsø relegated from the top tier. With two Europa League Group Stage matches still to play. Tottenham Hotspur maintained a 100% record in the 2013/14 competition with a pedestrian performance resulting in a 2-0 victory, courtesy of an own goal and a strike from Mousa Dembélé. 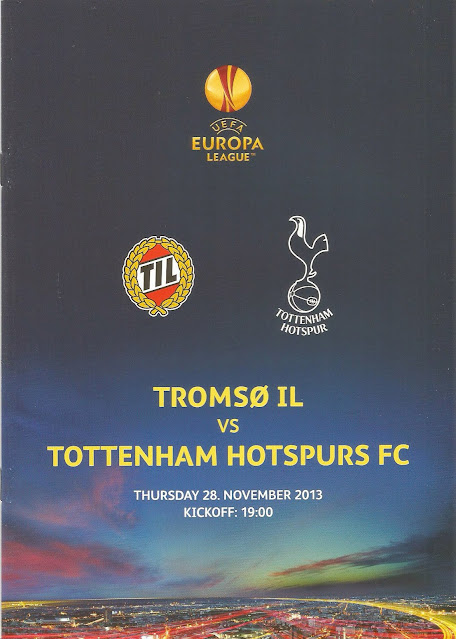 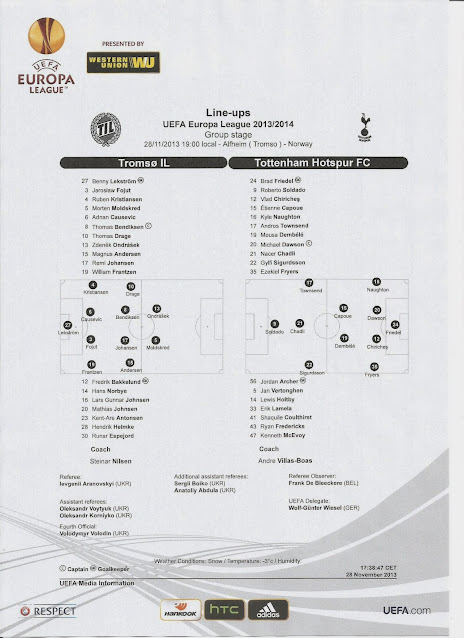 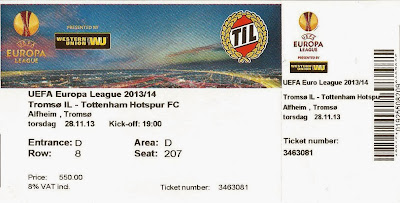