Cray Valley Paper Mills Football Club was founded in 1919, playing their first game on 20 September 1919 against Hamilton House, which Cray won. They won the Kent Junior Cup in 1921. The club played at the Paper Mills which was owned by the Nash family. The club colours are the Paper Mills' livery of green and white. The family sponsored the football club and their ground until the Mills' closure in 1980. That year they won the Kent Junior Cup for the second time. Cray Valley PM FC continued on after the Mills closure, and played in various leagues and at various grounds, until they finally settled at Badgers Sports Club in Eltham. 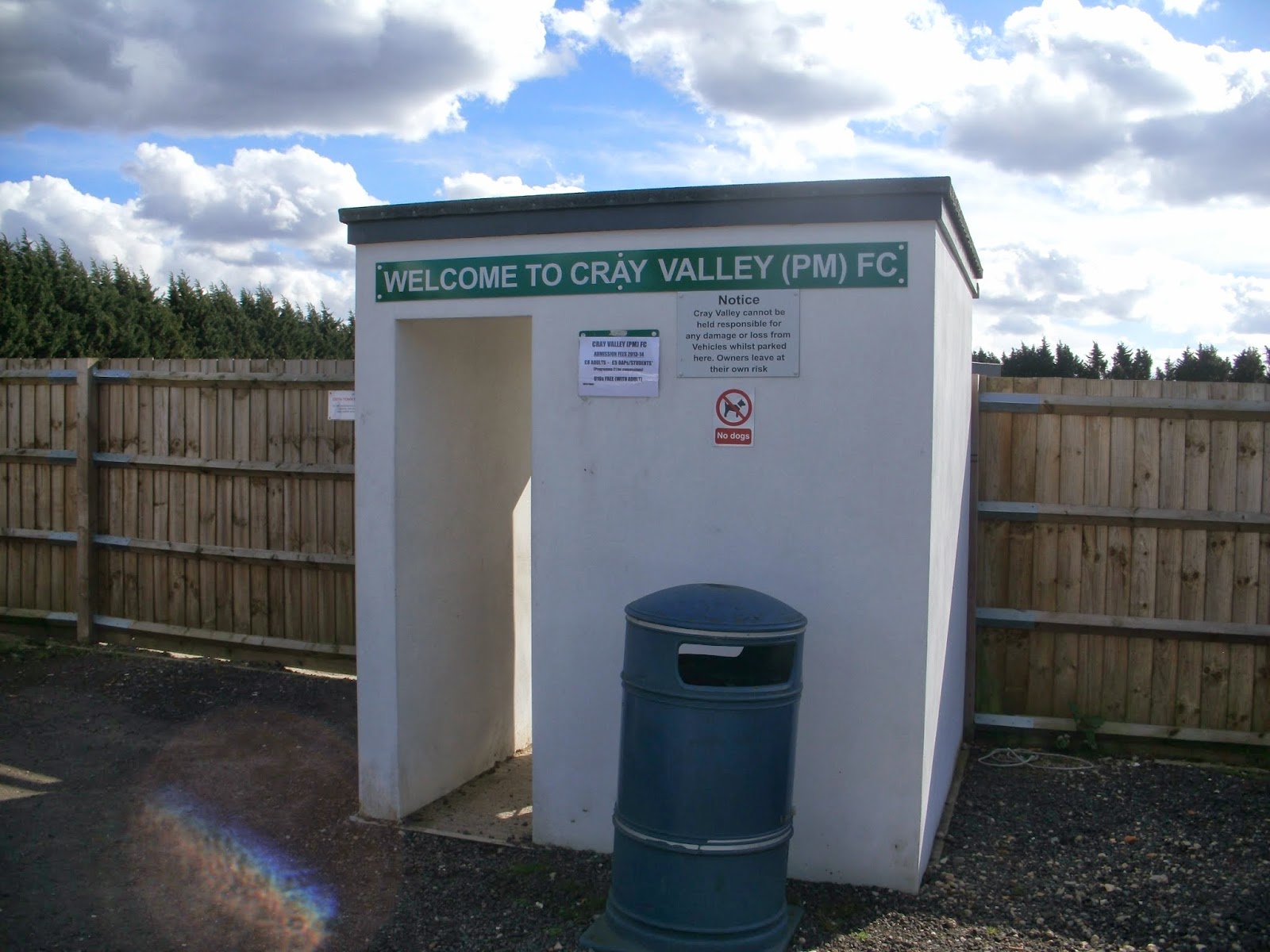 This was the Pieman’s first venture into the Southern Counties East League. However, there were a number of visits to constituent clubs when it was under the previous guise of the Kent League. I was fortunate to be offered a lift to this match. The North Circular and the Blackwall Tunnel behaved well and the journey from Enfield took no more than an hour. If visiting by public transport, Mottingham Station is around one mile away. In addition, the 160 bus service passes the ground. 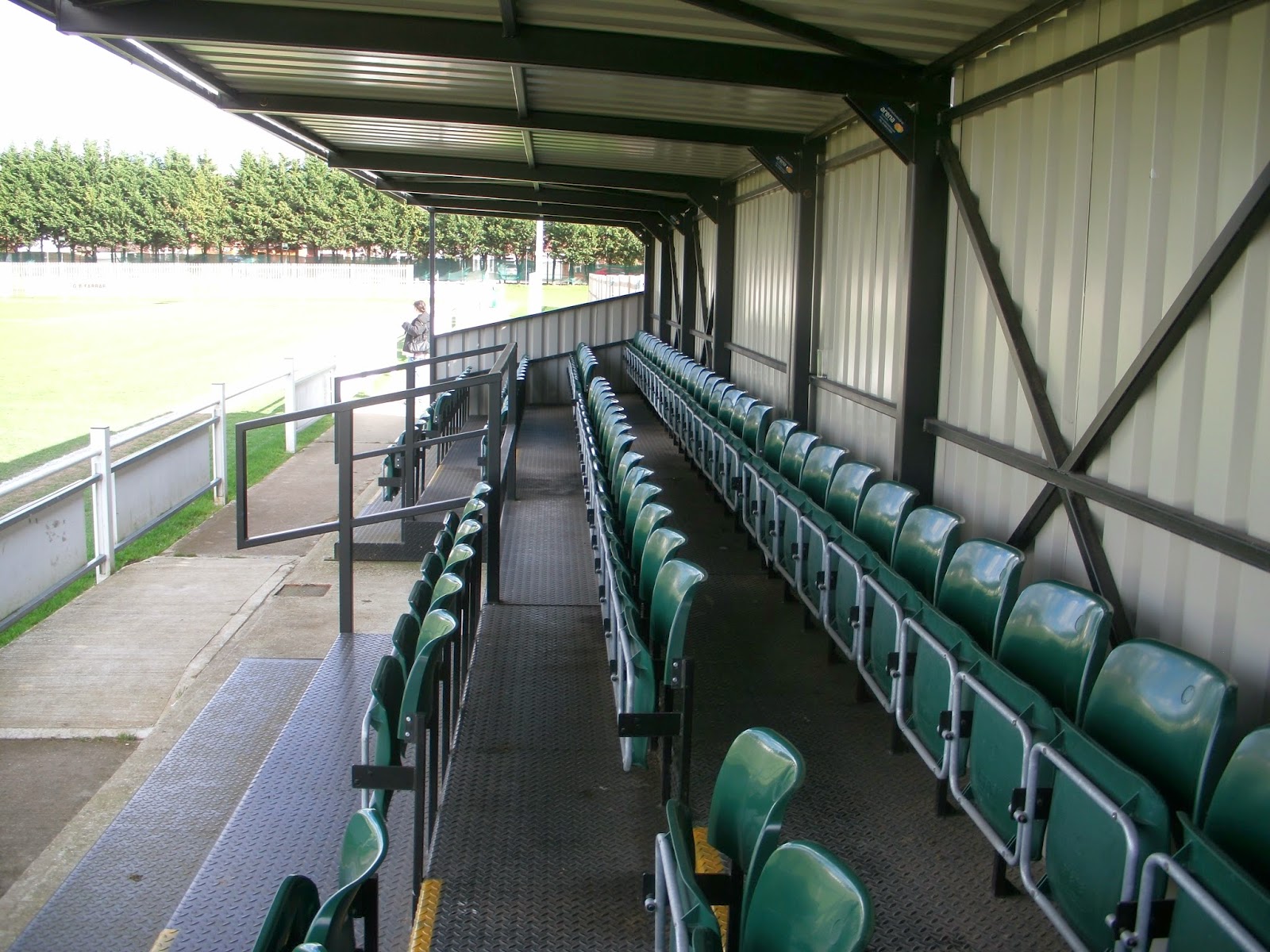 Clearly a lot of work has been carried out on this ground in recent times to enable the club to compete at Southern Counties East level. There is a fresh look about the place and I got the feeling that this is an ambitious club, looking to progress further.  The club officials were smartly attired in club colours and you could sense the pride they have in their club. 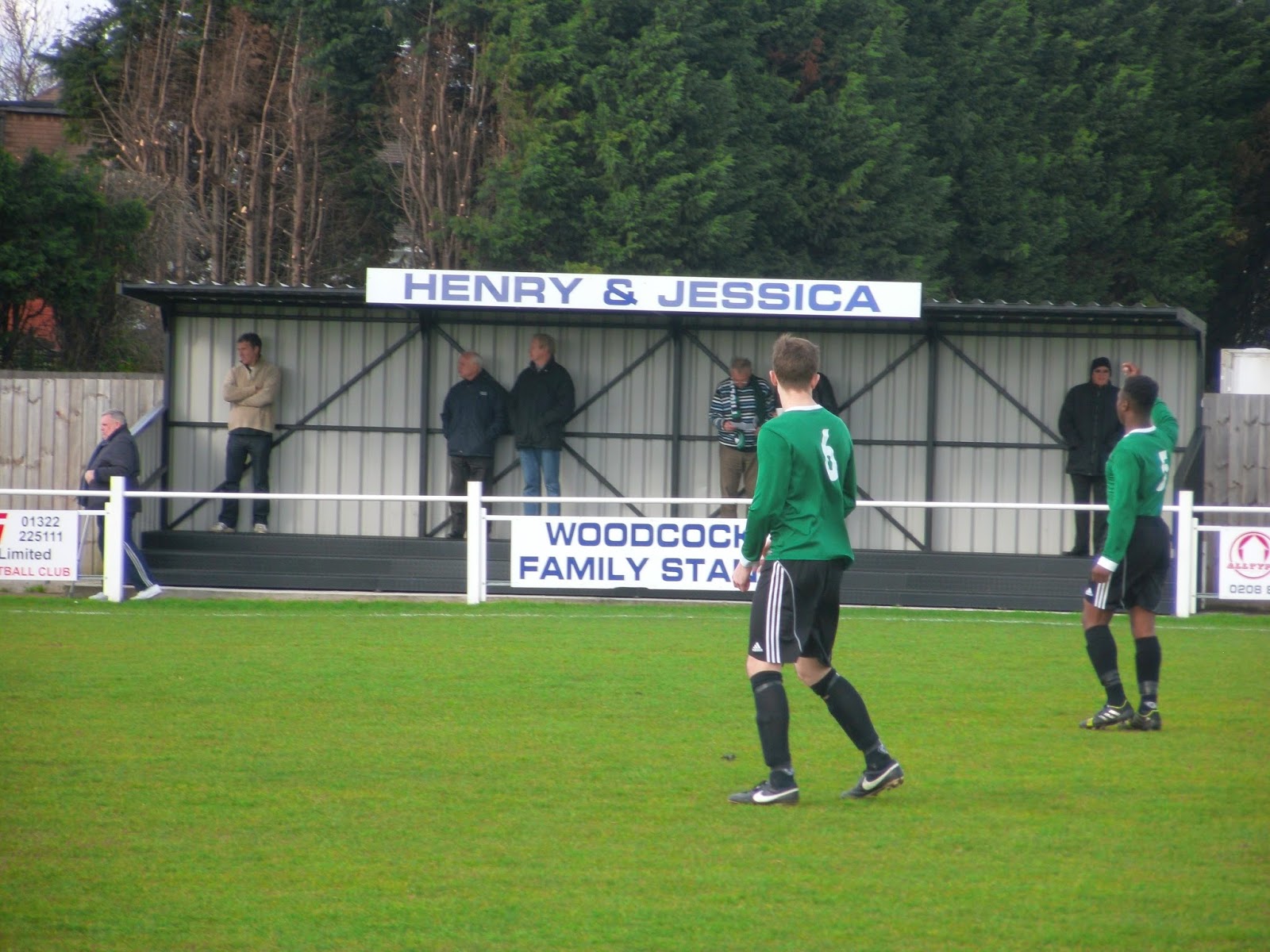 Although it is possible to stand at either end of the ground to watch proceedings, there are no spectator facilities. A decent covered seated stand straddles the half way line along one side of the pitch. This structure provided good shelter on a sunny but chilly day when the wind reminded us that summer is still in the distance. On the opposite side of the pitch is a small covered terraced area (Henry & Jessica Woodcock Family Stand).  The clubhouse, changing rooms and tea bar are also located on this side with the expansive car park behind. 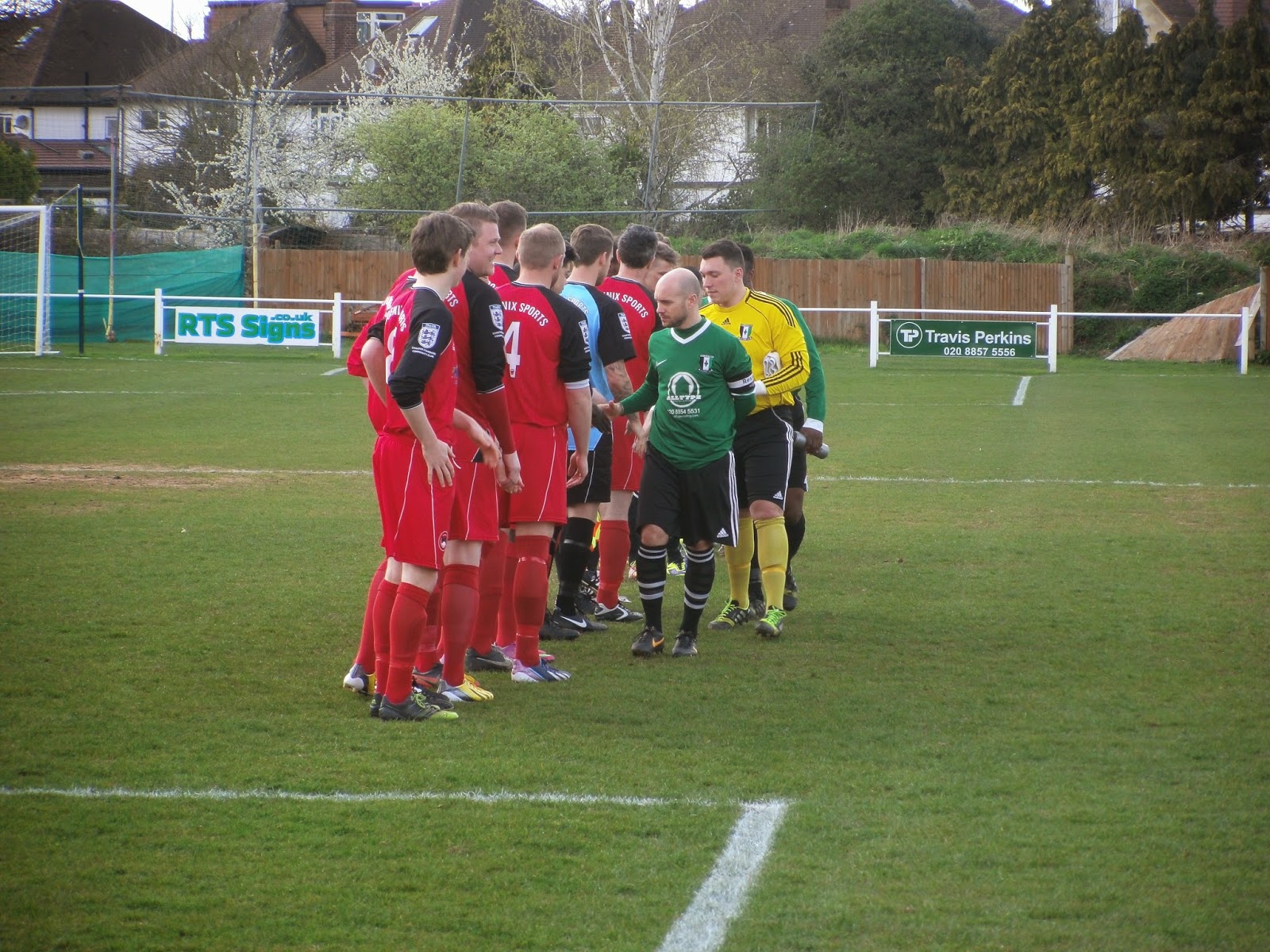 This match saw 7th placed Cray Valley host 4th placed Phoenix Sports. Early indications were that this was to be a closely contested match and so it proved to be. There is a distinct slope from one end of the pitch to the other but this did not appear to favour either team throughout the 90 minutes. There were a number of bookings and this correspondent believes the referee struggled to control the match. Justifiably showing a yellow card for kicking the ball away, but lacking consistency with similar offences. Also only showing a yellow card for deliberately kicking an opponent. Perhaps he was having an off day? 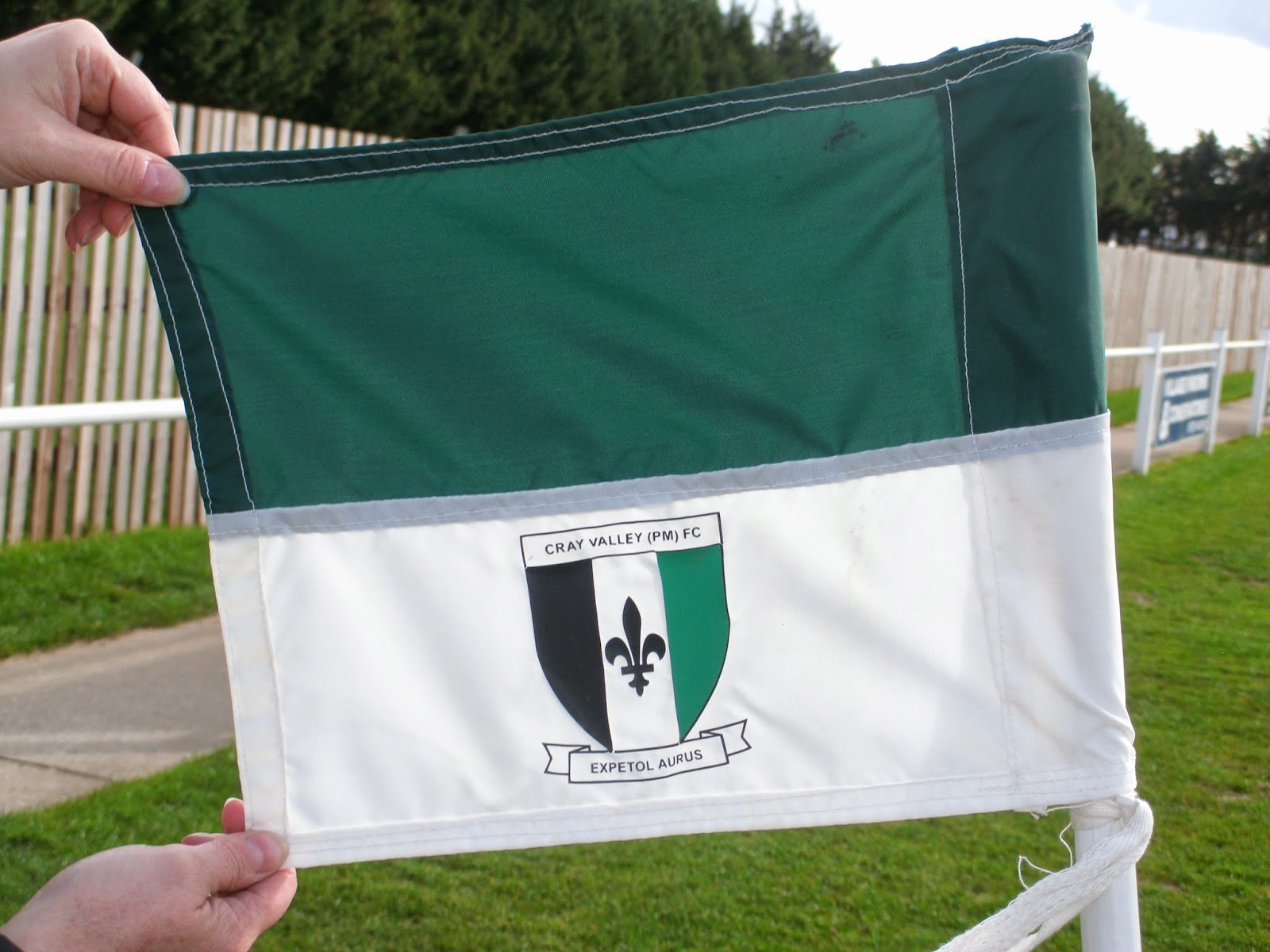 Having said that, this was an entertaining match. Drew Crush started the scoring in the 41st minute for Phoenix but, 2 minutes later the scores were level at 1-1 when Paul Gross scored for the home side. Jimmy Rogers then put Cray in front from the penalty spot on 70 minutes only for Andy Constable to equalise 11 minutes from time. Phoenix Sports had started the brighter of the two sides and certainly edged the first half. The home side fared better after the break and looked to have secured all three points. However, that would have been tough on Phoenix Sports - it was good that they were able to rise from the ashes of defeat to secure a draw! 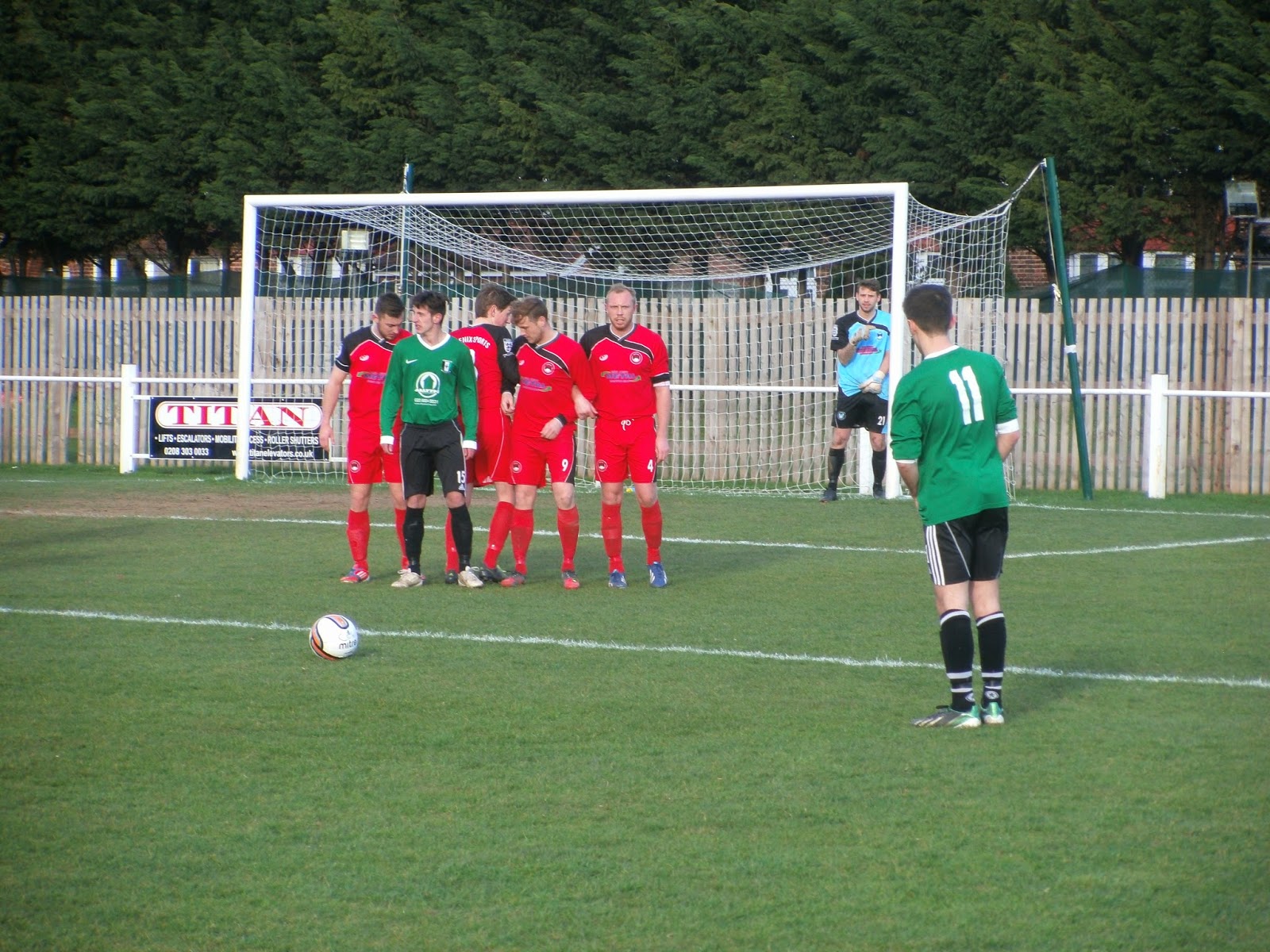 All in all a good afternoon out south of the river. Cray Valley Paper Mills FC is a welcoming club and it will be interesting to see how they progress. The roads again behaved on the return journey and I was home just before 6pm. 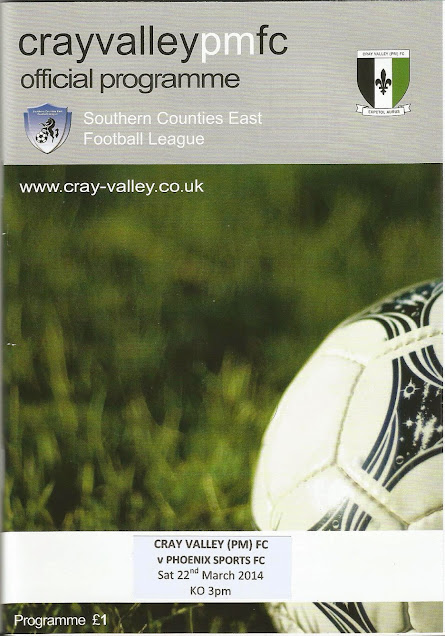 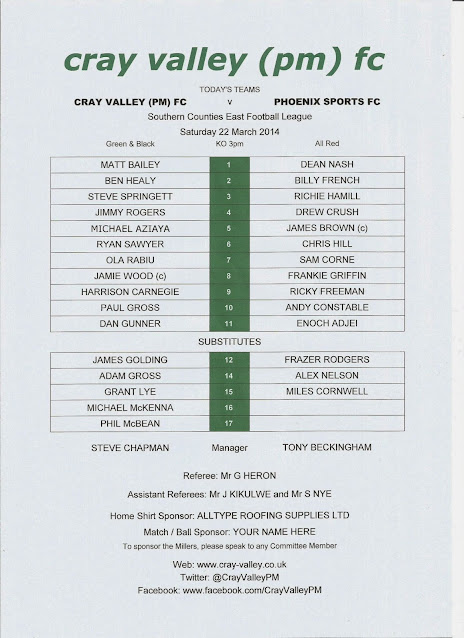