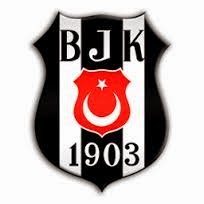 Istanbul is the largest city in Turkey, constituting the country's economic, cultural, and historical heart. Its commercial and historical centre lies in the European part of Eurasia, while about a third of its population lives in the Asian part. With a population of 14.1 million, the city forms the largest urban agglomeration in Europe as well as the largest in the Middle East, and the sixth-largest city proper in the world. Founded on the Sarayburnu promontory around 660 BC as Byzantium, the city now known as Istanbul developed to become one of the most significant cities in history. For nearly sixteen centuries following its reestablishment as Constantinople in 330 AD, it served as the capital of four empires: the Roman Empire (330–395), the Byzantine Empire (395–1204 and 1261–1453), the Latin Empire (1204–1261), and the Ottoman Empire (1453–1922). Istanbul is located in north-western Turkey within the Marmara Region on a total area of 5,343 square kilometers. The Bosphorus, which connects the Sea of Marmara to the Black Sea, divides the city into a European, Thracian side—comprising the historic and economic centres—and an Asian, Anatolian side. The city is further divided by the Golden Horn, a natural harbour bounding the peninsula where the former Byzantium and Constantinople were founded.

Beşiktaş Jimnastik Kulübü (Beşiktaş Gymnastics Club), known as Beşiktaş, is a Turkish sports club. The club's football team is the first and one of the major teams in Turkey, having never been relegated to a lower division. The professional sports club, founded in 1903, is based in the Beşiktaş district of Istanbul, Turkey. Beşiktaş Gymnastics Club established the first sport club of Turkey in 1903. The club competes in numerous branches including football, basketball, volleyball, handball, athletics, boxing, wrestling, chess, bridge, gymnastics, rowing, table tennis, paralympic sports and beach football. The home ground of Beşiktaş was the İnönü Stadium with a seating capacity of 32,086, however this has been shut down in order for the Vodafone Arena to be opened on the same land. 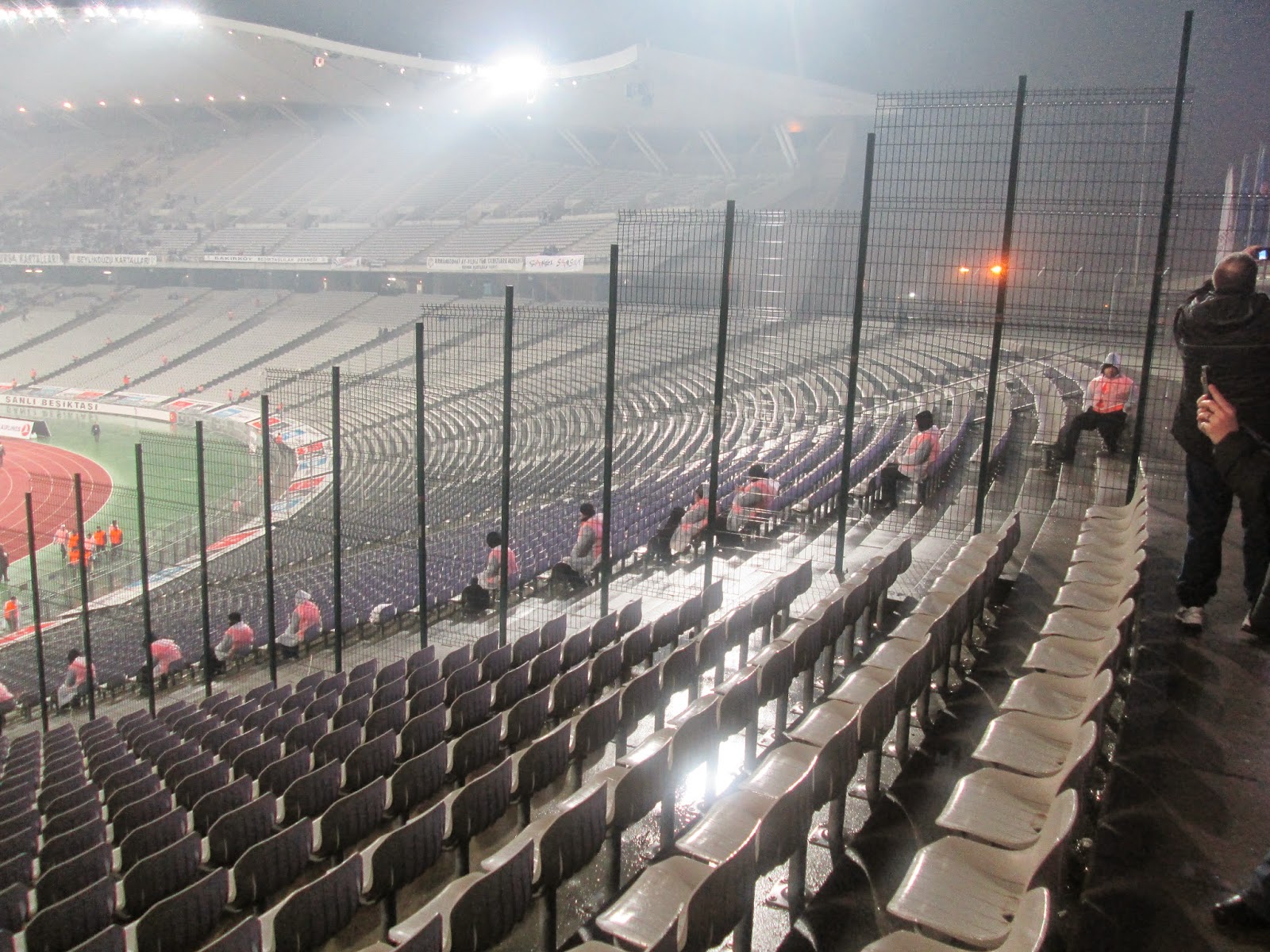 In the meantime the club are temporarily based at the Atatürk Olympic Stadium located in İkitelli, a district in the western outskirts of Istanbul. It is the largest-capacity stadium of Turkey. The stadium is named after Mustafa Kemal Atatürk, the founder and first President of the Republic of Turkey. Its construction began in 1999 and was completed in 2002. It was built for Turkey's failed bid for the 2008 Olympic Games that were ultimately awarded to Beijing. With its 76,092 (all-seater) capacity and Olympic size, it was granted the "5-star sports complex" title by the UEFA in 2004, enabling it to host the finals of UEFA events. The 2005 UEFA Champions League Final between Milan and Liverpool was played at the Atatürk Olympic Stadium on 25 May 2005. 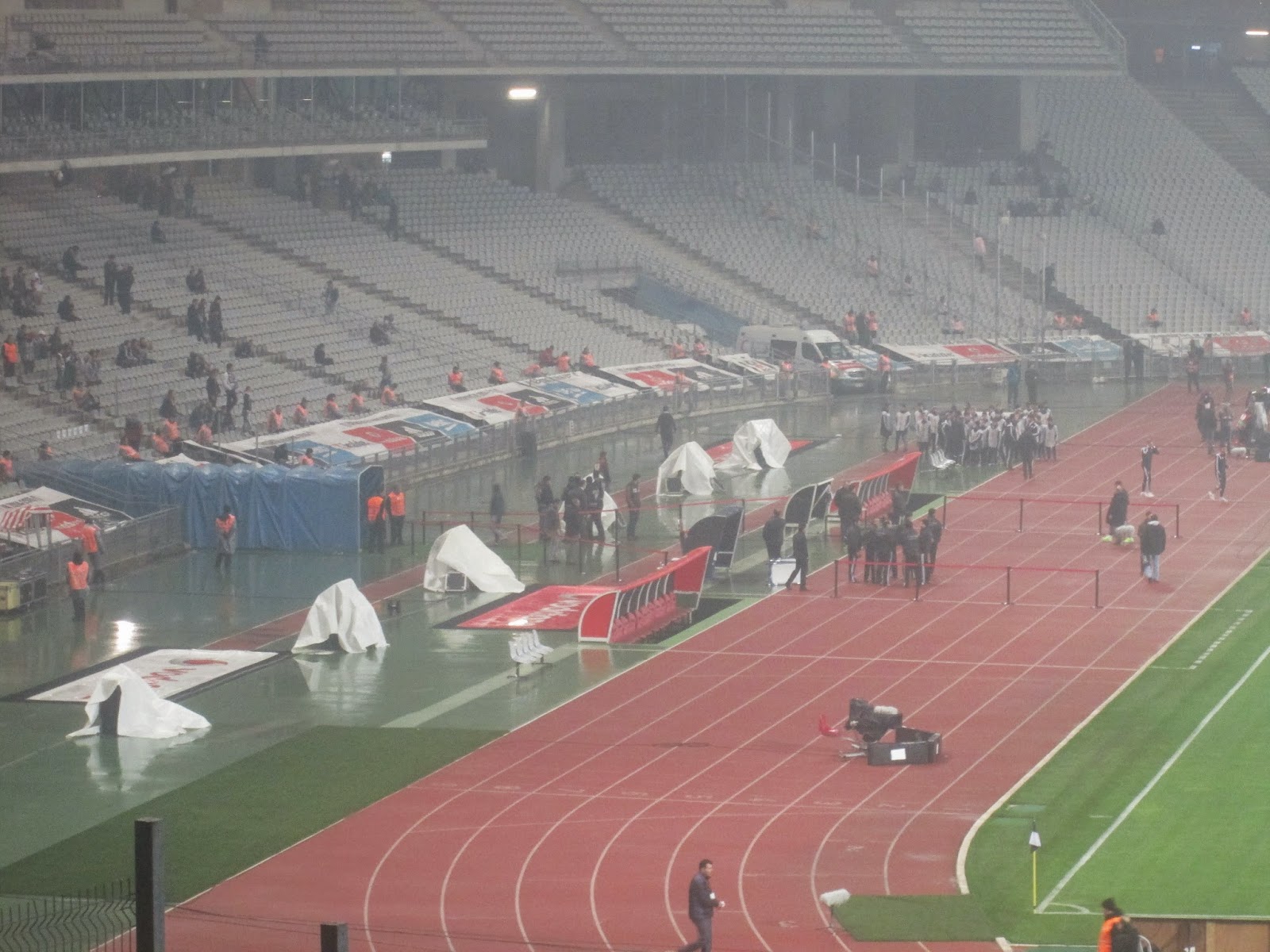 Istanbul appears to have changed a bit since my previous visit (also to watch Spurs play at Besiktas) in 2006 - if anything the place has developed and has a bit more of a western feel to it. The best example I can provide to back up my thoughts on this are the excellent public transport links which are certainly more joined up. That said, the traffic in and around Istanbul is extremely busy day and night! 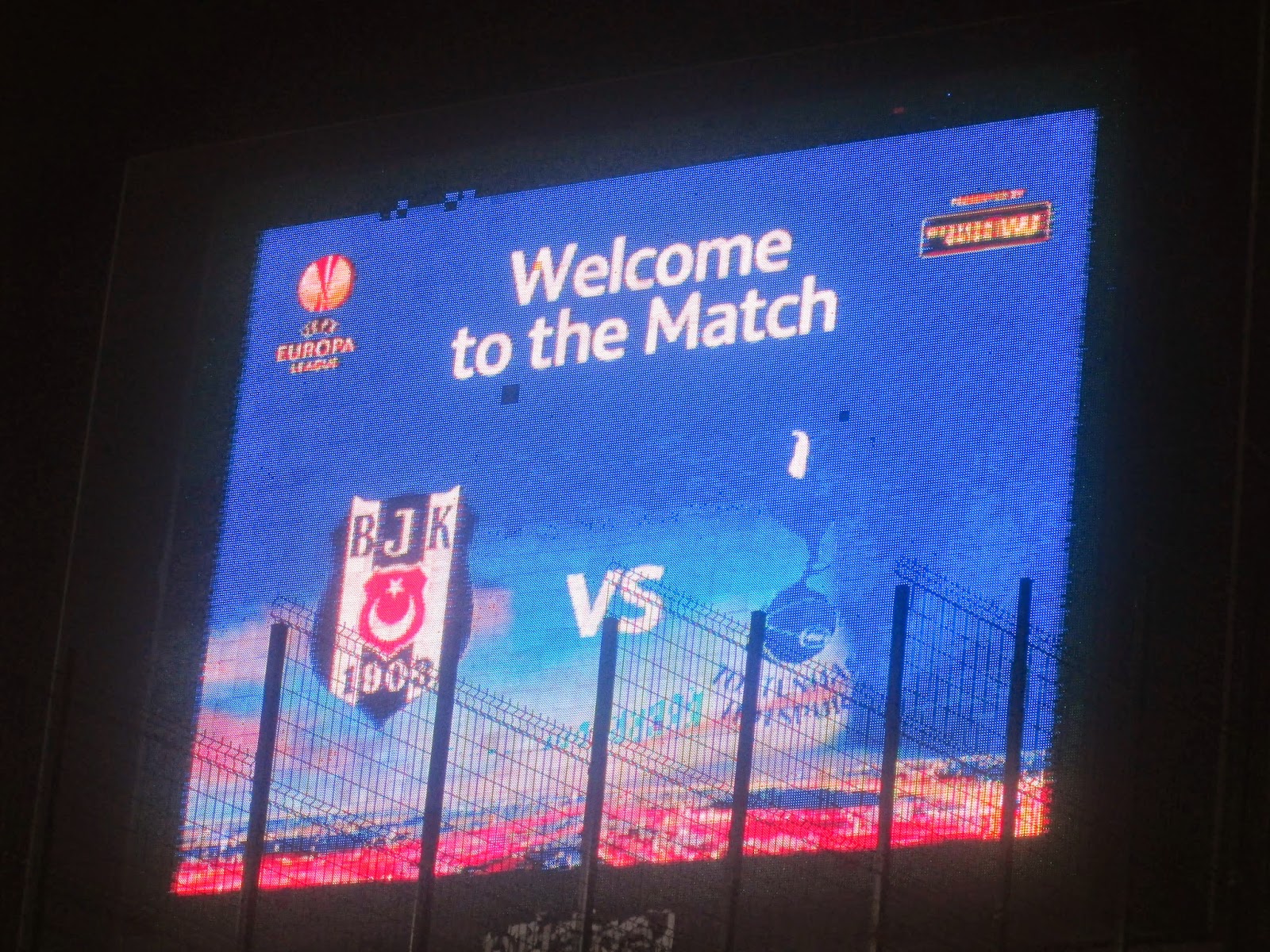 For the 20:00 kick off, our coaches were scheduled to leave the centre at 16:45. This early departure was necessary to counter the hectic Istanbul rush hour traffic. It took the full duration of a football match to reach the stadium and this was only possible as we had a police escort and made good use of the motorway hard shoulder! 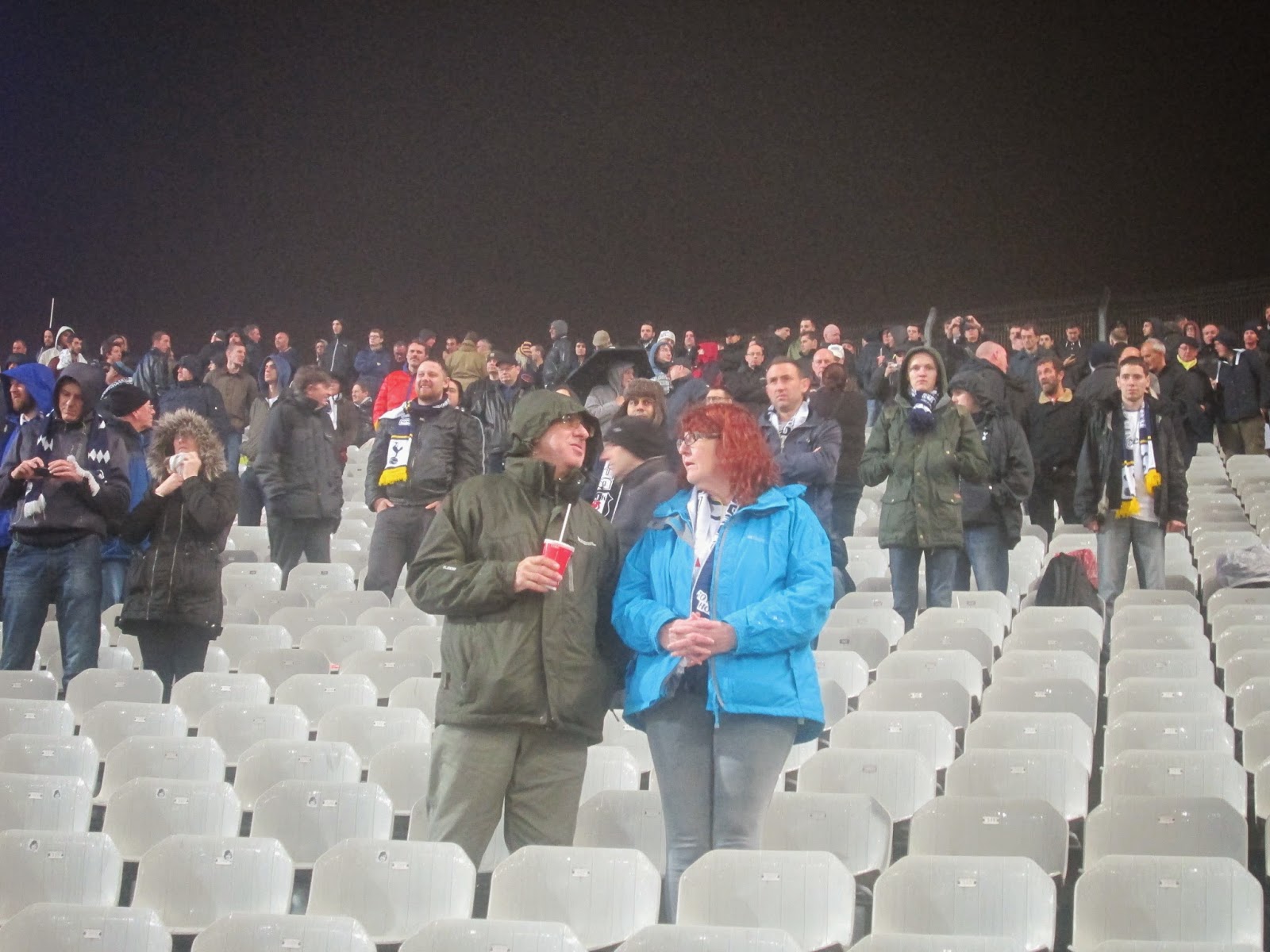 For a relatively new stadium, I found this place rather disappointing. Although there is a modern feel about the venue, it is disjointed and appears to be incomplete. The section allocated to away fans was extremely poor with sub standard catering facilities available through a fence! 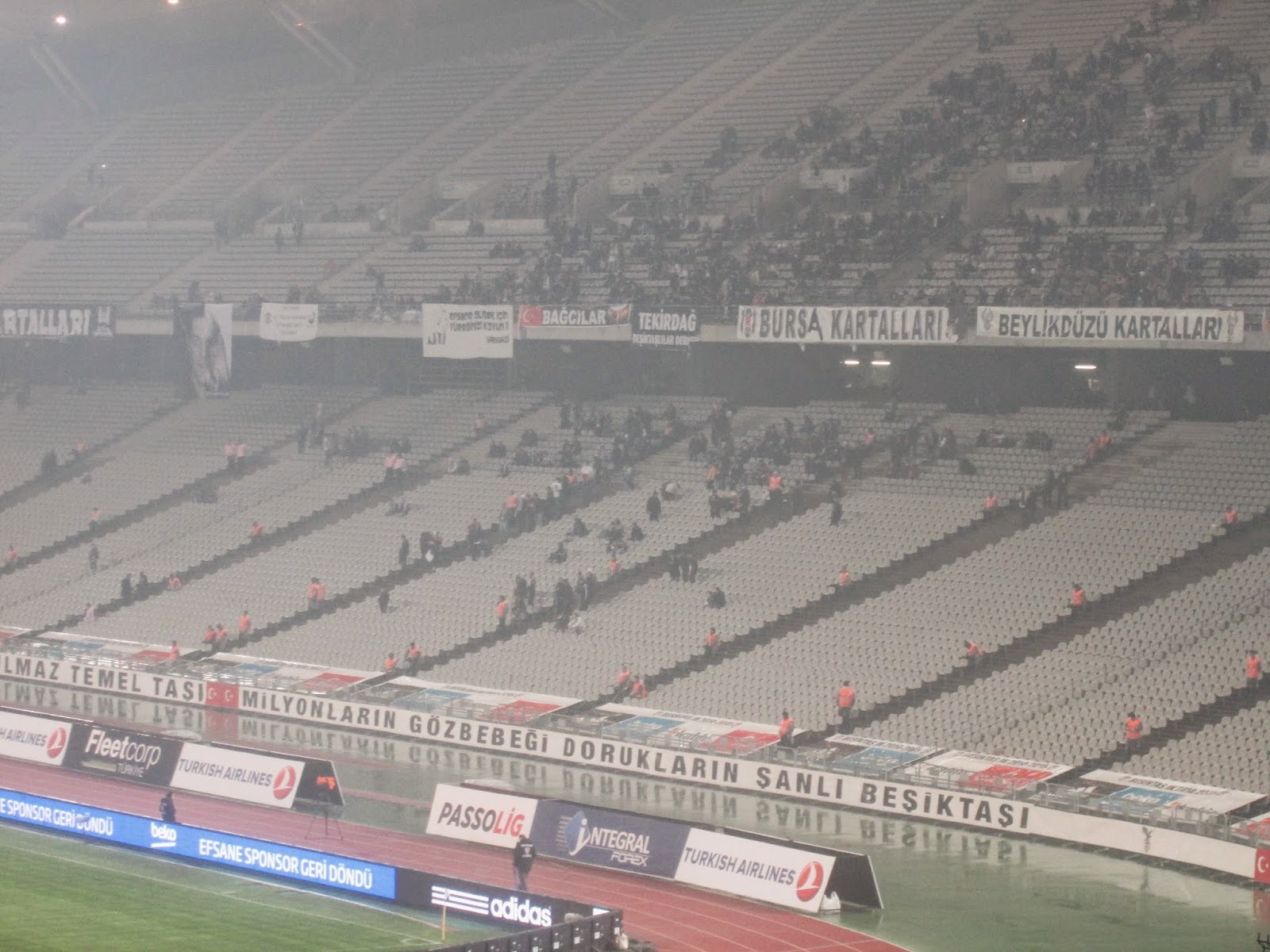 There was a fifteen minute delay during the first half when the floodlights failed. I'm not sure if this is a regular occurrence but on 90 minutes it happened again. We therefore had to wait to play out the 3 minutes of time added on at the end of the match. Besiktas won a poor match 1-0 to ensure that they top the group ahead of Spurs. The journey back to the centre also took a while, it being midnight before we arrived back near the Blue Mosque.

Admission: 40 Lira (the home supporters at the opposite end paid 25 Lira)
Attendance: 19,511
Programme: None issued