Florence is the capital city of the Italian region of Tuscany and of the province of Florence. It originated as a Roman city, and later, after a long period as a flourishing trading and banking medieval commune, it was the birthplace of the Italian Renaissance. Starting from the late Middle Ages, Florentine money, in the form of the gold florin, financed the development of industry all over Europe, from Britain to Bruges, to Lyon and Hungary. Florentine bankers financed the English kings during the Hundred Years War, as well as the papacy, including the construction of their provisional capital of Avignon and, after their return to Rome, the reconstruction and Renaissance embellishment of the latter. Florence was home to the Medici, one of history's most important noble families. Lorenzo de' Medici was considered a political and cultural mastermind of Italy in the late 15th century. Two members of the family were popes in the early 16th century: Leo X and Clement VII. Catherine de Medici married King Henry II of France and, after his death in 1559, reigned as regent in France. The Medici reigned as Grand Dukes of Tuscany, starting with Cosimo I de' Medici in 1569 and ending with the death of Gian Gastone de' Medici in 1737. During World War II the city experienced a yearlong German occupation (1943–1944) and was declared an open city. The Allied soldiers who died driving the Germans from Tuscany are buried in cemeteries outside the city. In 1944, the retreating Germans demolished the bridges along the Arno linking the district of Oltrarno to the rest of the city, making it difficult for the British troops to cross. However, at the last moment Charle Steinhauslin, at the time consulate of 26 countries in Florence, convinced the German general in Italy that the Ponte Vecchio was not to be destroyed due to its historical value.

Associazione Calcio Fiorentina was founded in the autumn of 1926 by local noble and National Fascist Party member Luigi Ridolfi, who initiated the merger of two older Florentine clubs, CS Firenze and PG Libertas. The aim of the merger was to give Florence a strong club to rival those of the more dominant Italian Football Championship sides of the time from Northwest Italy. After a rough start and three seasons in lower leagues, Fiorentina reached the Serie A in 1931. That same year saw the opening of the new stadium, originally named Giovanni Berta, after a prominent fascist, but now known as Stadio Artemio Franchi. At the time, the stadium was a masterpiece of engineering, and its inauguration was monumental. To be able to compete with the best teams in Italy, Fiorentina strengthened their team with some new players, notably the Uruguayan Pedro Petrone, nicknamed el Artillero. Despite enjoying a good season and finishing in fourth place, ACF Fiorentina was relegated the following year, although they would return quickly to Serie A. In 1941 they won their first Coppa Italia, but the team were unable to build on their success during the 1940s because of World War II and other troubles. The club won the Italian championship in 1955–56, 12 points ahead of second-place Milan. Milan beat Fiorentina to top spot the following year, but more significantly Fiorentina became the first Italian team to play in a European Cup final, when a disputed penalty led to a 2–0 defeat at the hands of Alfredo Di Stéfano's Real Madrid. The club then won their second, and last, national title in 1968-69. ACF Fiorentina was relegated at the end of the 2001–02 season and went into judicially controlled administration in June 2002. This form of bankruptcy (sports companies cannot exactly fail in this way in Italy, but they can suffer a similar procedure) meant that the club was refused a place in Serie B for the 2002–03 season, and as a result effectively ceased to exist. 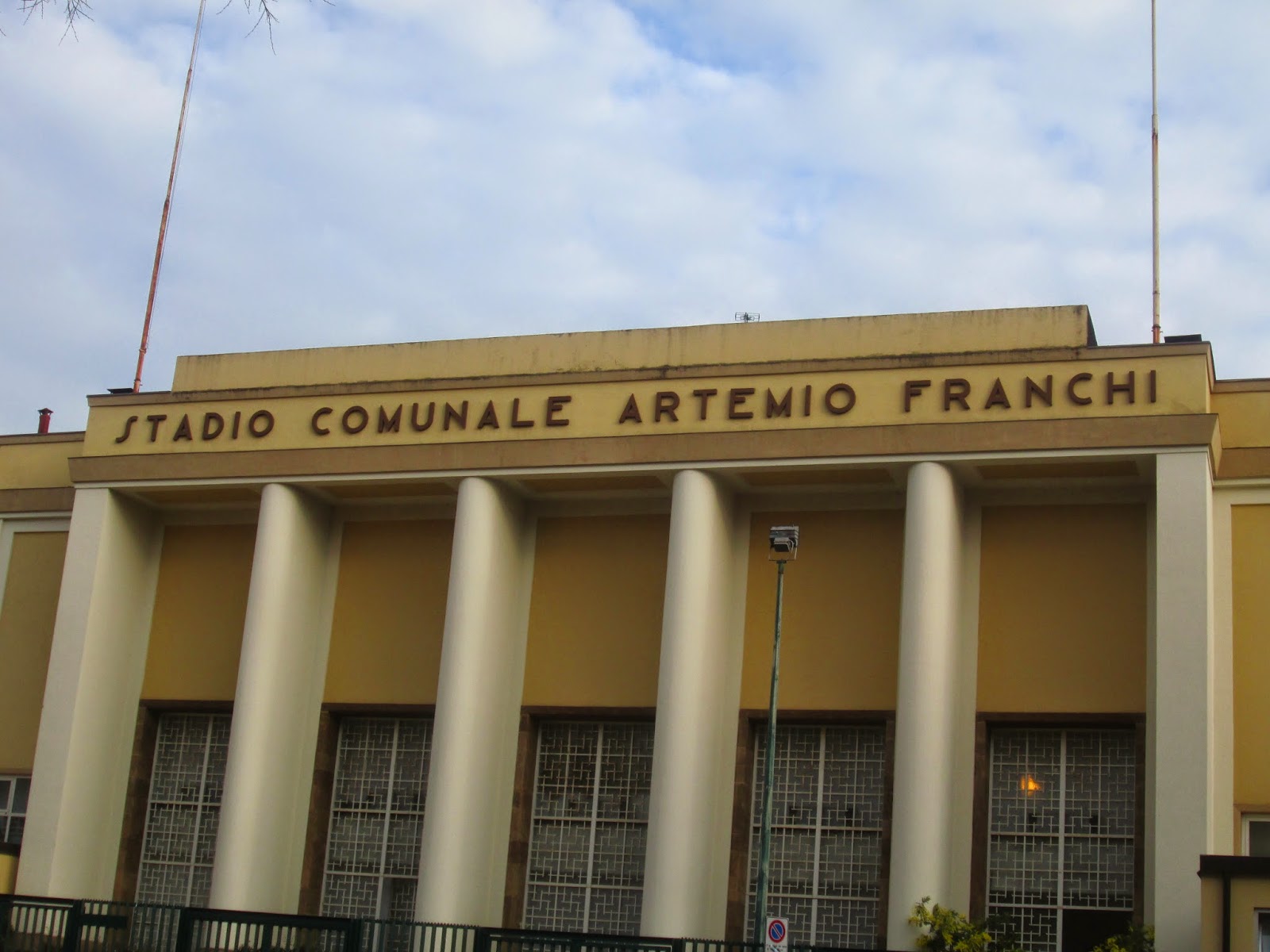 A late morning flight from Heathrow to Pisa was followed by a short train journey to Florence. Despite having a map, finding my hotel was not a straightforward experience. My excuse being those roads that appear to run parallel, do not always! However finding myself by the river meant I could get my bearings by working out which bridge was the nearest to where I needed to be. 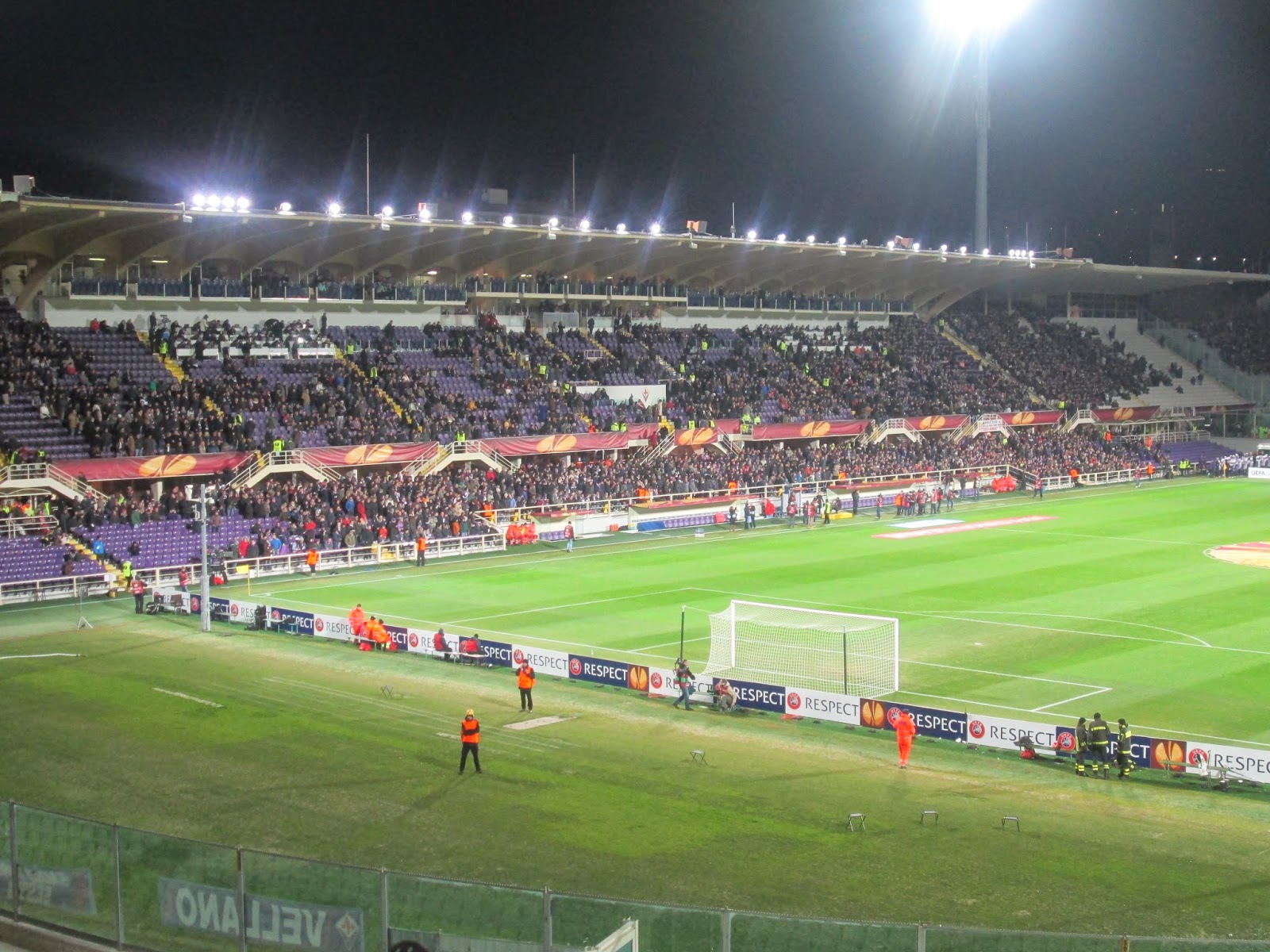 That evening there was an opportunity to wander the streets and get familiar with the geography of Florence. It also presented the chance to visit Mostodolce. This bar, situated close to the main railway station, has a tremendous selection of ales, all of which are brewed by Mostodolce, but not on the premises. My first selection, as recommended by Dave Price, was Black Doll, a stout (5.2%) which was excellent. This was followed by Fra Bartolomeo (5%) weiss beer, which was in good form too. My last beer for this session was Volpe (6.3%) a pale ale type brew, which helped to round off the evening. Just to ensure consistency, I revisited this establishment the following lunchtime to further check the quality. 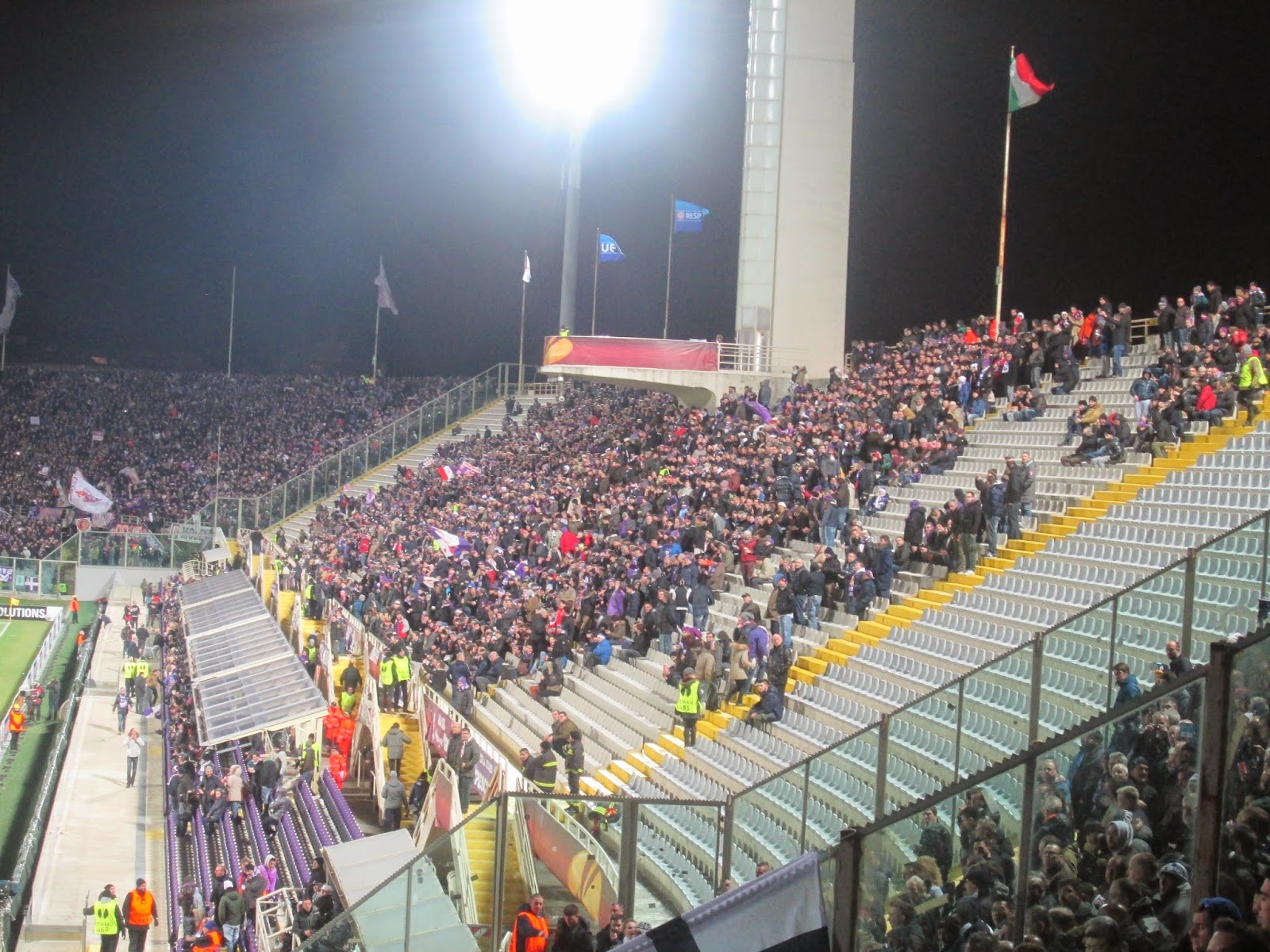 On matchday morning after a decent breakfast at the hotel, this Pieman wandered across Ponte Vecchio and ambled around the streets on the other side of the river. Inspired by Matt Smithurst “I’m gonna have a gelato” it was time for an ice cream. On this occasion my choice of vanilla and strawberry was a fitting tribute to our friend from Merton. More walking followed along the ancient narrow streets and I concluded that I prefer Florence to the other cities I have visited in Italy. 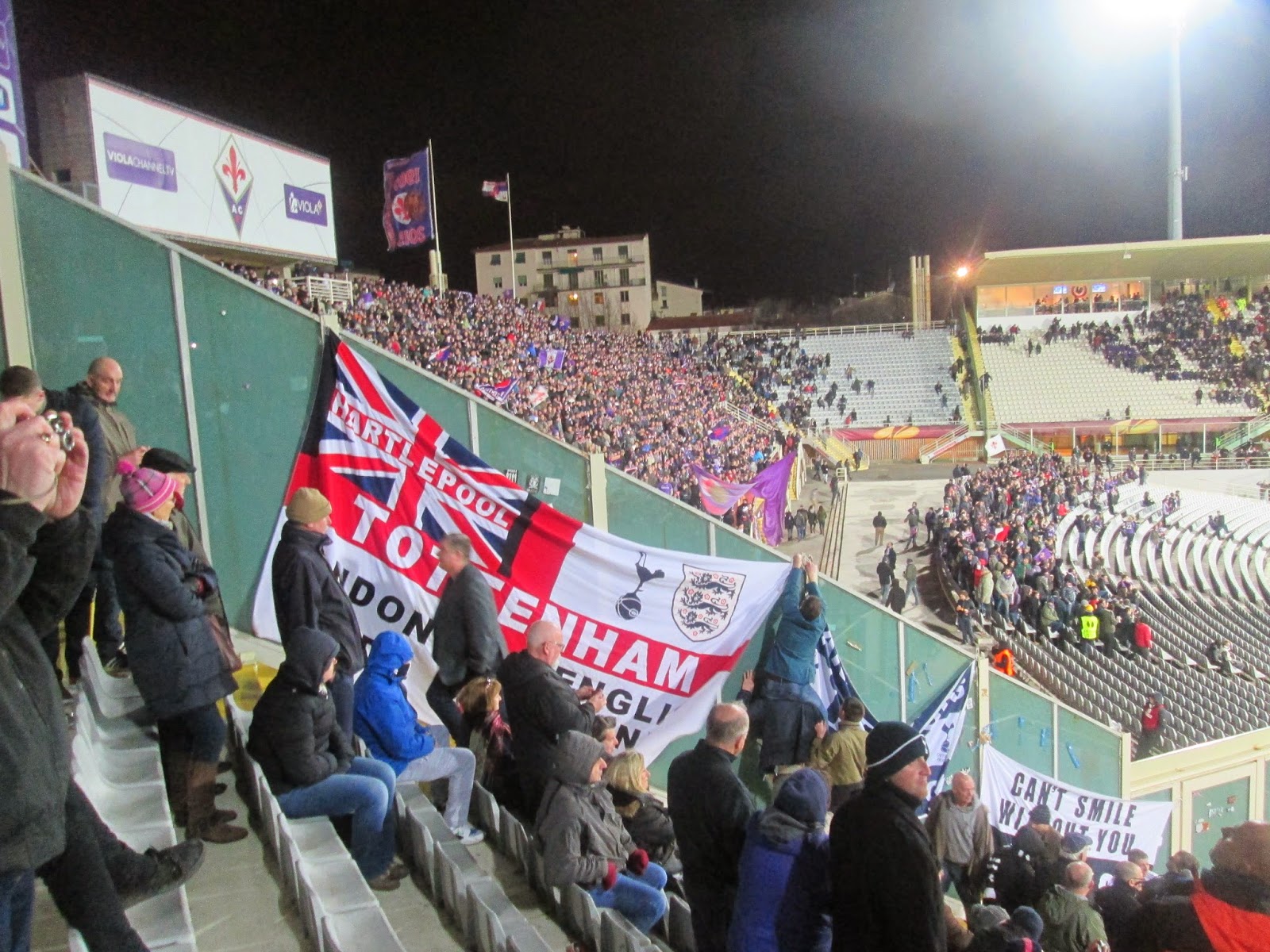 I decided to walk to the stadium and this took me around 25 minutes at a leisurely pace. I did not want to catch the special buses from the centre, as it would deny me the opportunity to have a proper look around the outside of the Stadio Artemio Franchi. The stadium first opened in 1931 and you can easily see the art deco influence of that period. Much of this venue is uncovered and a wet day would be a very wet day for spectators. That said, a good view is afforded from all areas. This includes the away section, where if you position yourself sensibly, the whole arena is visible despite the partitions. 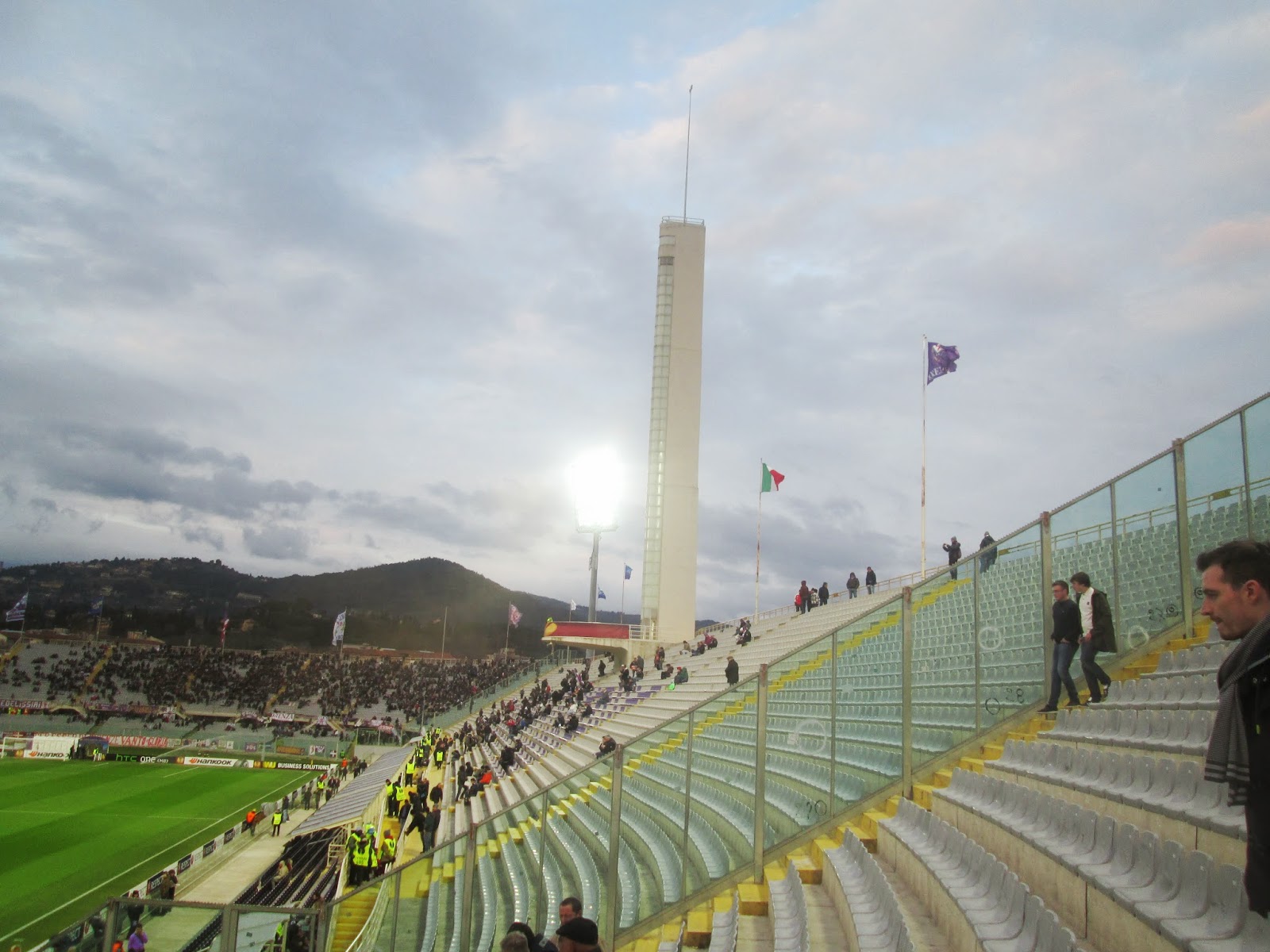 Tottenham Hotspur and the UEFA Europa League have a curious relationship. The Group stages of the competition are usually negotiated (Mr Redknapp managed to squirm out once) only for the knockout stages to produce some erratic form and the ability to go out against teams that with slightly better application and professionalism, would be beaten. This was certainly the case over the two legs against a decent but unspectacular Fiorentina side. Spurs could have wrapped up the tie in the first twenty minutes at White Hart Lane but let the Italians of the hook. In this return match, individual errors proved decisive as Spurs went down by two goals.