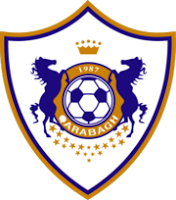 Baku is the capital and largest city of Azerbaijan, as well as the largest city on the Caspian Sea and of the Caucasus region. Baku is located 92 feet below sea level, which makes it the lowest lying national capital in the world and also the largest city in the world located below sea level. It is located on the southern shore of the Absheron Peninsula, which projects into the Caspian Sea. On 28 April 1920, the 11th Red Army invaded Baku and reinstalled the Bolsheviks, making Baku the capital of the Azerbaijan Soviet Socialist Republic. The city underwent many major changes. As a result, Baku played a great role in many branches of the Soviet life. Since about 1921, the city was headed by the Baku City Executive Committee, commonly known in Russian as Bakgorispolkom. Together with the Baku Party Committee (known as the Baksovet), it developed the economic significance of the Caspian metropolis. From 1922 to 1930, Baku was the venue for one of the major Trade fairs of the Soviet Union, serving as a commercial bridgehead to Iran and the Middle East. After the dissolution of the Soviet Union, Baku embarked on a process of restructuring on a scale unseen in its history. Thousands of buildings from the Soviet period were demolished to make way for a green belt on its shores; parks and gardens were built on the land reclaimed by filling up the beaches of the Baku Bay. Baku's largest industry is petroleum, and its petroleum exports make it a large contributor to Azerbaijan's balance of payments. 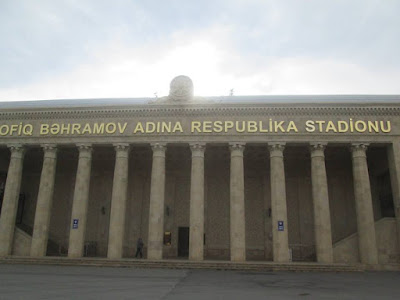 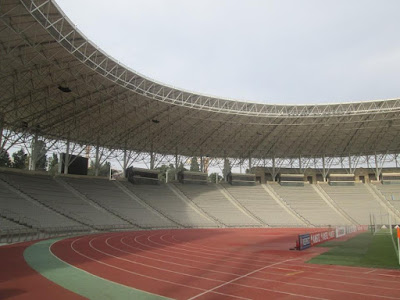 The Tofiq Bahramov Stadium was built in 1951. Its construction started before World War II in 1939, but was suspended. When its construction resumed, it was finished by German prisoners of war. Initially the stadium was named after Joseph Stalin. After the 20th denunciation of Stalin, it was renamed after Vladimir Lenin. In 1993, the stadium was named after the famous football referee Tofiq Bahramov who died in the same year. In the 1966 World Cup Final, with the score at 2–2 and after 11 minutes of the first period of extra time, Geoff Hurst of England fired a shot on goal which bounced off the crossbar sharply downwards, hit the ground, and then spun backwards away from the goal. There were some moments of indecision by the referee before he noticed that Bahramov, who was the linesman at that end of the ground, was signalling to him. Eventually, a goal was awarded to England, who went on to win the game 4–2. In 2011, the Presidential Reserve Fund of the State Budget of Azerbaijan for 2011 allocated $10 million for capital repairs and reconstruction of the stadium as it could be used as potential venue for Eurovision Song Contest 2012. The stadium was renovated and reopened on 16 August 2012. The stadium was also one of the venues for the group stages of the 2012 FIFA U-17 Women's World Cup. 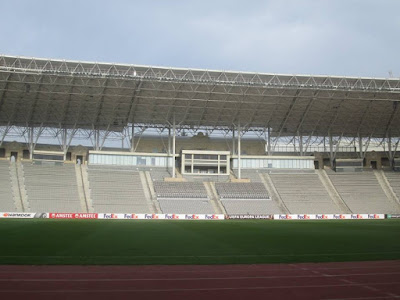 My journey involved flying to Baku via Istanbul. Leaving Gatwick mid-afternoon and with an eventual time difference of four hours, it was around 6:00am when I arrived at my hotel. After some limited sleep to top up that available on the flights, it was time to explore Baku. The first point of call was the stadium. Our taxi driver had convinced himself that we were part of an official party and drove us through security into the main stadium complex. We arrive pitch side just as a UEFA delegation were being given what appeared to be a routine match day tour to inspect the facilities. 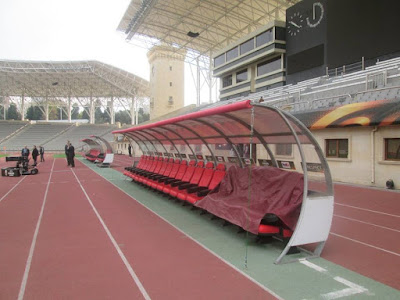 Having used this opportunity to take an abundance of daylight photographs and purchase an additional match ticket (cost the equivalent of around £1:30 - the 75p tickets had sold out!) we used the metro (150 yards from the stadium) to head back to the old town area of Baku. At the Four Seasons hotel (the team were staying at this rather grand establishment) Mauricio Pochettino was briefing representatives of the English press. After this session he graciously spent time with my eager companions, having a photograph taken with them. He also asked about Adam Carne's replica 1953 (West Brom style) Spurs shirt. Fair play to Spurs chairman Daniel Levy who also obliged with photographs. 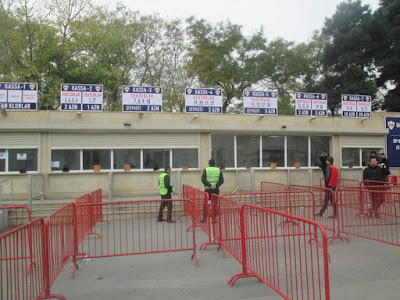 Adam is a much traveled football supporter and has attended 4 World Cup Finals and 17 European Cup Finals. He said that of all the places he has visited, Baku (he had previously been there to watch England) was the most transformed between visits. This I can believe as certain areas have clearly benefited from investment from oil money. The local beer is relatively cheap but reasonably high in quality and there were a few opportunities to sample this product. 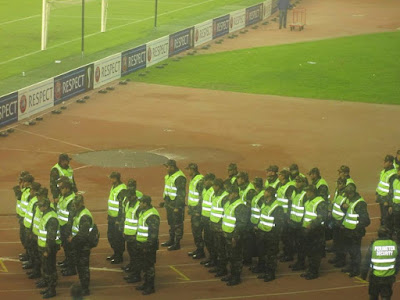 Prior to entering the stadium, we wandered around outside and the previously stated West Brom shirt was attracting the attention of vast numbers of the home support. The stadium is similar to many encountered on previous European jaunts. An athletics track surrounded by a bowl of seating. The view, even from the cheaper areas is good and unhindered. The weather was kind and throughout the 90 minutes Tottenham Hotspur were never really troubled by the home side. Qarabağ actually were more of a threat to Spurs in the corresponding match at White Hart Lane. On this occasion, Harry Kane's strike was enough for Spurs to claim the three points and confirm progress to the knockout stages of the competition. The following morning saw the commencement of my return journey, again via Istanbul. I eventually arrived back at Gatwick mid-afternoon. 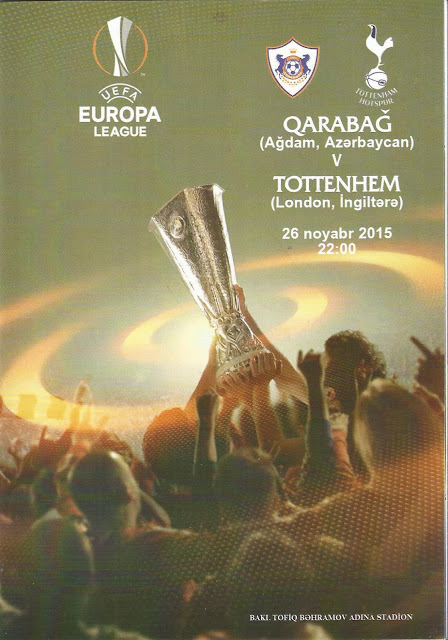