There has been a settlement at Tottenham for over a thousand years. It grew up along the old Roman road, Ermine Street (some of which is part of the present A10 road), and between High Cross and Tottenham Hale, the present Monument Way. When the Domesday Book was compiled in 1086, about 70 families lived within the area of the manor, mostly labourers working for the Lord of the Manor. A humorous poem entitled the Tournament of Tottenham, written around 1400, describes a mock-battle between peasants vying for the reeve's daughter. The River Lea was the eastern boundary between the Municipal Boroughs of Tottenham and Walthamstow. It is the ancient boundary between Middlesex and Essex and also formed the western boundary of the Viking controlled Danelaw. Today it is the boundary between the London Boroughs of Haringey and Waltham Forest. A major tributary of the Lea, the River Moselle, also crosses the borough from west to east, and often caused serious flooding until it was mostly covered in the 19th century. Tottenham cake is a sponge cake baked in large metal trays, covered either in pink icing or jam (and occasionally decorated with shredded desiccated coconut). Tottenham Cake "was originally sold by the baker Henry Chalkley, who was a Quaker, at the price of one old penny, with smaller mis-shaped pieces sold for half an old penny." The pink colouring was derived from mulberries found growing at the Tottenham Friends burial ground. 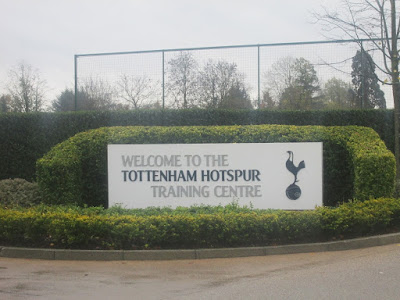 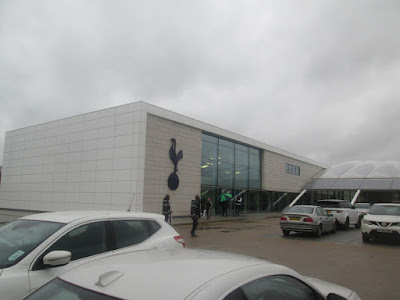 Hotspur Way Training Centre in Enfield, Tottenham Hotspur’s new state of the art training complex was opened in late 2012, and is widely recognised as one of the best training facilities of its type in Europe. Built on 77 acres, the new Training Centre has been designed with environmental protection and sustainability in mind. The focus has been on enhancing and reinstating key features of the local environment including restoring historic hedgerows and field boundaries as well as significant additional planting, an organic kitchen garden and orchard. The Club has planted over 150 new and semi-mature trees and thousands of new plants, hedges and flowers across the site in order to establish and enhance the ecological habitat. An attenuation pond has been installed to establish a wetland and intermittent wetland habitat with natural plant and wildlife, which is also designed to control the flow of water off site through the historic restored sleuss gate. 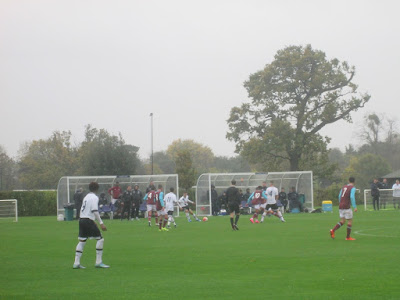 With the first team not playing until Sunday, this Pieman decided it was time to make a first visit to Hotspur Way. My journey was very straightforward I caught the train from Cheshunt to Turkey Street (5 minutes). On leaving the station I followed Turkey Street up to the A10 and used the underpass, continuing along Turkey Street to the junction with Bulls Cross Road. Turning right at the historic Middleton House it took less than a further ten minutes to reach the Hotspur Way facility, which is situated behind Middleton House. 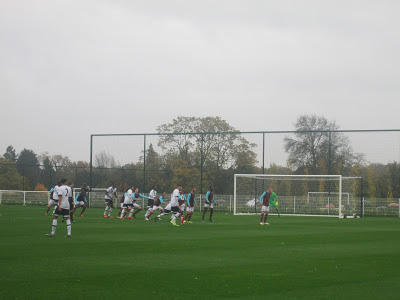 It was already raining quite heavily so the opportunity to shelter in the Reception area of the main building was not to be declined. I was very impressed with the site and the efforts the club have made to make the environment pleasing on the eye. My brief introduction to the surrounds left a lasting positive impression and the knowledge that the club is sharing the facilities with the local community through numerous initiatives is to be commended. Refreshments were available from a decent looking retro van with hot and cold drinks also obtainable from vending machines in the main block. 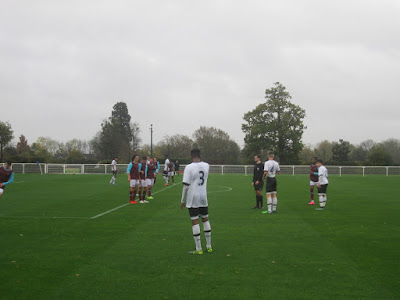 The main pitch is conveniently the nearest to the building and many of the gathered spectators left it until just before kick-off to brave the elements. It rained constantly throughout the match and despite attempts to keep dry it was always going to be an uphill task, at times the precipitation was horizontal which meant those with umbrellas and the rest of us were being attacked from the side! The playing surface was superb and held up well throughout a keenly contested derby. West Ham with the wind supporting their first half efforts took the lead through Akinola but were pegged back before the break when Dinzeyi levelled with a great header.


The second period saw a tremendous tussle and Spurs clinched the points when Brown notched the winner. The visitors will be disappointed not to get anything from this match and frustration towards the end saw Dobson (who?) dismissed for something said. After the final whistle Sylvestre was rewarded with the same punishment for a similar offence. At this point I was able to hotfoot it back to Turkey Street station in less than 20 minutes to easily catch the 13:17 service to Cheshunt. A very enjoyable adventure if a tad wetter than preferred!