Burscough is a large village and civil parish within West Lancashire, to the north of both Ormskirk and Skelmersdale. The parish also includes the hamlet of Tarlscough and the Martin Mere (a large wildfowl reserve and visitor attraction on the edge of Burscough and is owned by the Wildfowl and Wetlands Trust). Burscough developed originally as two small farming villages (Burscough and Burscough Bridge) on a low ridge above the West Lancashire Coastal Plain, and has Viking roots. Following constant development of new housing estates and apartments, Burscough's population has recently rapidly grown and the two communities have long since merged together. Burscough has two main railway stations: Burscough Junction, on the Liverpool to Preston line, was opened by the East Lancashire Railway on 2 April 1849, though the line now terminates at Ormskirk. Burscough Bridge, on the Southport to Manchester line, was opened by the Lancashire & Yorkshire Railway on 9 April 1855. The presence of two stations is a sign of the two previous villages and their differing landowners. 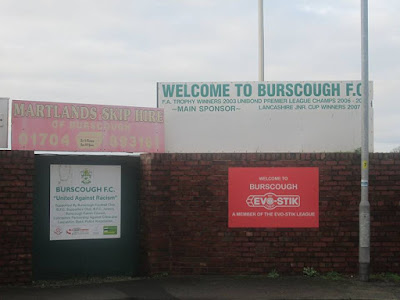 Following World War II the present Burscough Football Club was founded in 1946, starting life in the Liverpool County Combination. In their second season, 1947–48, they achieved a treble, winning the Lancashire Junior Cup, George Mahon Cup and the Liverpool Challenge Cup. Two years later they again claimed the Junior Cup and also won the County Combination title for the first time. In 1952 they won the Liverpool Challenge Cup for a second time. In 1981 the club became founder members of the North West Counties League, and had the distinction of becoming the league's first ever champions under Bryan Griffiths. A new grandstand seating 250 was built in 1986 to replace the old wooden stand, which had stood for 60 years. The club appointed Shaun Teale as player/manager in May 2002 and the ex-Aston Villa defender went on to lead the club to its greatest-ever achievement as Burscough became the smallest club to win the FA Trophy following a 2–1 victory over Tamworth at Villa Park on 18 May 2003. Played in front of a crowd of 14,296, it was the Linnet's twelfth game in the competition. Despite the win, Teale was sacked six weeks later. 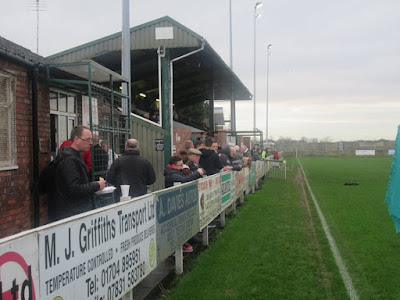 A late morning arrival in Liverpool provided an opportunity to check the internet to ascertain whether my chosen match at Burscough would go ahead. The adverse weather conditions sweeping the country had meant that a number of matches had been postponed. Once given the green light I made my way to Wigan to catch an onward connection to Burscough Bridge. On alighting at the station it is possible to see the floodlights of Victoria Park, which is located immediately behind Tesco. Having walked over to the ground for further confirmation, it was time for some liquid refreshment. The Hop Vine public house on the main street is only a few minutes walk away. The bonus for me was that this establishment has a brewery on site. This Pieman opted for a pint of Hop Vine bitter (3.8%). This is a "golden session ale with a light body and moderate bitterness. The initial sweet, hoppy finish gives way to a fragrant citrus aroma with hints of pine and lemon". The pub was also doing a good trade in meals with reservations in place for later in the day. 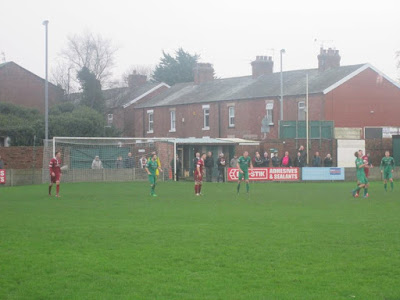 Once admitted to the ground, there was an opportunity to wander around taking photographs. There is a covered seated stand along one side of the pitch. Opposite this is a covered terraced area. Another covered terraced area is situated behind one of the goals, whereas the other end of the ground, where the turnstiles are situated, also houses the club shop. In one corner of the ground is a wonderful refreshment room which echoes the past. In another corner is Barons Sports and Social Club (licensed bar and function room). 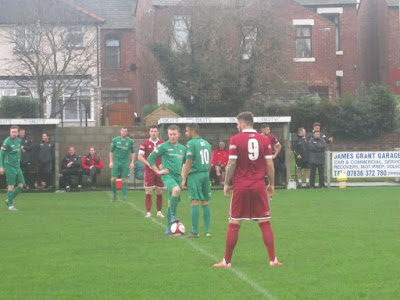 The match saw 5th place Burscough take on 7th placed Spennymoor Town in what promised to be an evenly contested encounter. The first half certainly accorded with this, but after the break the visitors gradually asserted themselves as they sensed the points were there for the taking. Shane Henry made the initial breakthrough with a curling shot from the edge of the box in the 52nd minute. The points were secured for Spennymoor when Liam Henderson added a second in the 71st minute. The match was well refereed on a difficult playing surface. 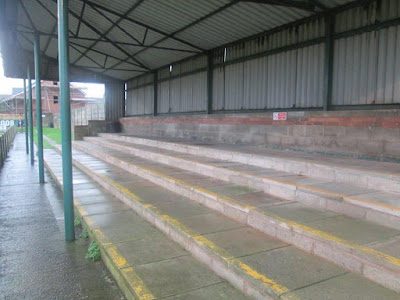 Burscough FC has submitted a planning application to build a new stadium. The new venue will be located 100 yards from the current site which does look to be in need of some tender loving care. That said Victoria Park is a classic old ground with quirky charm. The refreshment room has an aura about it that can never be replicated. There are good financial reasons why the club has to move to the new venue. This Pieman is grateful to have visited Victoria Park whilst the opportunity exists. 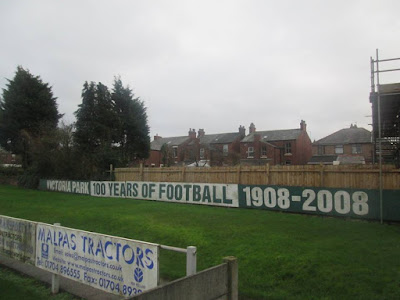 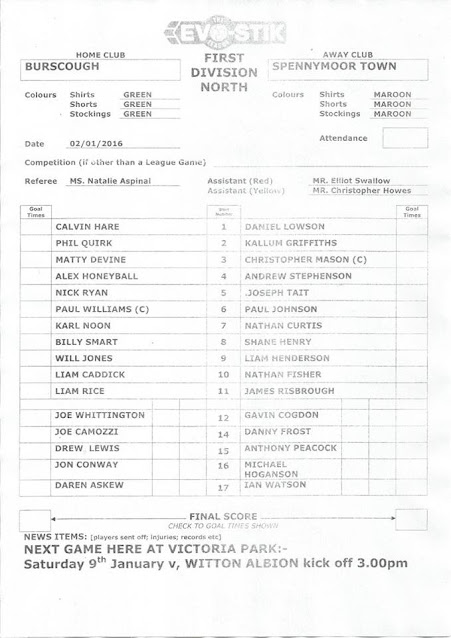 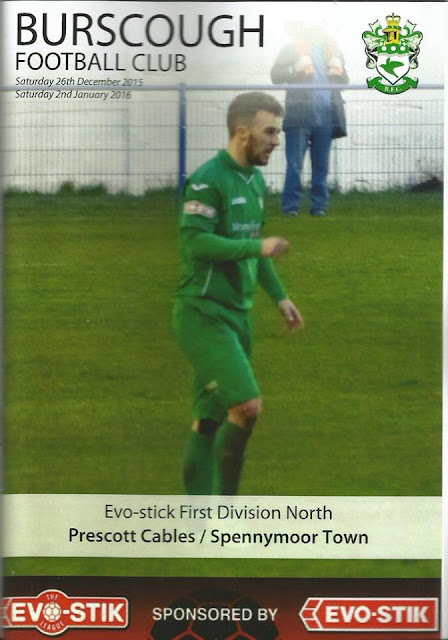 What a shame I did not recognize you, as we met before at the Spurs game at Villa Park about one year ago. I was there with Garry from Harlow.
Now we met queueing for the toilet. You asked me where I am from and what I am here for. So I showed you my Spurs-Hat.

I was In Burscough to support the Alfie Lund Fund. Alfie is an disabled boym who lives in Burscough. His dad collects scarf, shirts and flags of as much clubs as possibl to raise awrness for his sons illness MECP2 duplication syndrom: More to read here: www.thealfielundfund.co.uk

Btw: Its a good read you wrote here...