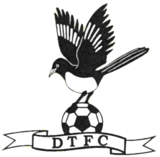 Dereham, also known as East Dereham, is a town in Norfolk. It is situated on the A47 road, some 15 miles west of Norwich and 25 miles east of King's Lynn. The town should not be confused with the Norfolk village of West Dereham, which lies about 25 miles away. It is believed that Dereham's name derives from a deer park that existed in the area, although it is known that the town pre-dates the Saxon era. Saint Wihtburh, the youngest daughter of Anna, King of the East Angles, founded a monastery there in the seventh century after seeing a vision of the Virgin Mary. Dereham suffered damage during a Zeppelin air raid during the night of 8 September 1915. Damaged buildings included the headquarters of the 5th Territorial Battalion of the Norfolk Regiment on the corner of Church Street and Quebec Street. The old Vicarage was used as a Red Cross hospital. Dereham was the home to the "Jentique" furniture factory which made boxes for both instruments and bombs during World War II. The town was also the home to the Metamec clock factory. 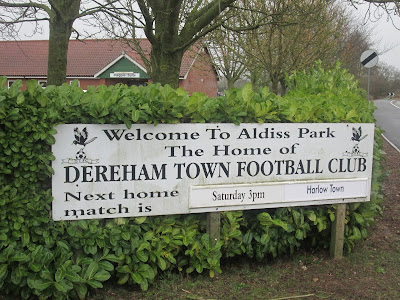 The Football club was founded as Dereham F.C. in 1884, spending many of its early years in the Dereham & District League. In 1891–92 the club reached the final of the Norfolk Senior Cup. By 1910 the club were playing in the Norwich & District League and had been renamed East Dereham. In 1920 they adopted their current name and in 1935 they joined the Norfolk & Suffolk League, which had lost several clubs to the newly established Eastern Counties League. When the N&SL merged into the Anglian Combination, the club were placed in the Senior B Division. They won at the first attempt and were promoted Premier Division. They were renamed Dereham Hobbies United in 1986 after a local Sunday league team merged into the club. They were relegated from the Premier Division at the end of the 1988–89 season, but made an immediate return to the Premier Division as Division One champions. In 1991 they returned to the name Dereham Town. In 1997–98 they won the Anglian Combination Premier Division, earning promotion to Division One of the Eastern Counties League, and also won the Don Frost Memorial Cup in the same season. In 2001–02 the club finished second in Division One, beating Stanway Rovers 1–0 on the final day to overtake them and earn promotion to the Premier Division. The club won the Norfolk Senior Cup in 2006, defeating Norwich United 1–0 and again in 2007 when Wroxham were beaten 1–0. In 2012-13 they won the Eastern Counties League Premier Division, earning promotion to Division One North of the Isthmian League. 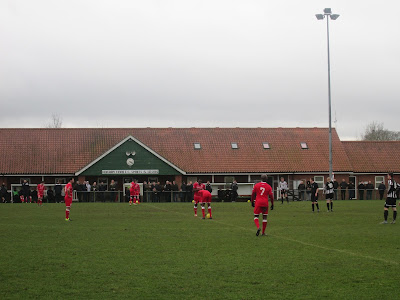 It is possible to reach Dereham by public transport. There is a regular direct bus service from Norwich. However, on this occasion I was offered a lift. The journey from the Cheshunt area taking around two hours via the M11, A11 and A47. This journey was interrupted briefly at Swaffham where we stopped to buy refreshments. 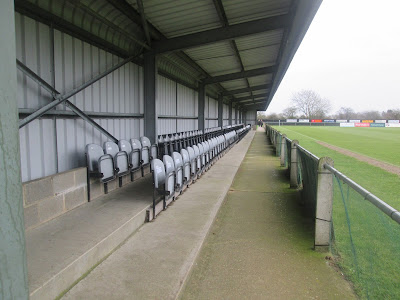 Aldiss Park is a neat venue. Along one side is the impressive clubhouse, changing facilities and turnstile block. On the opposite site is a long covered stand containing two rows of seating. I opted to view the match from near the middle of this stand and enjoyed a good view of the action. Behind one of the goals is a small covered standing area. The remaining areas of the ground is limited to hard standing. 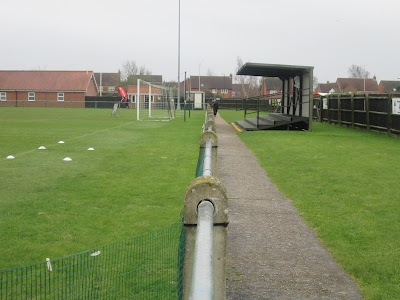 Prior to the match, with time to spare, this Pieman availed himself of the clubhouse facilities and was delighted to find real ale on offer. My choice of Moon Gazer Golden from the Norfolk Brewhouse was inspired.  This golden ale has a fresh citrus aroma and well-hopped character, with fruit and hop flavours carrying through to the refreshing, crisp, dry finish. I was informed that the club has a regular supply of local ales which is very encouraging for a non-league club and I hope they benefit from the custom that this deserves. 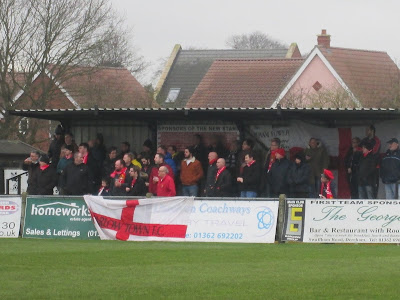 Coming into this match, visitors Harlow Town were on a fantastic run of twelve consecutive league wins. This form had seen them rise to 2nd place in the table, ten points behind leaders AFC Sudbury, but with two matches in hand. When Harlow took the lead early in the match courtesy of Leon Antoine’s towering header, it looked set for an extension of this club record winning run. However, the home side had other ideas and by the interval had established a 2-1 lead. It has to be said that although Dereham were battling hard in this contest, the match referee was having a massive influence with an erratic performance and some inexplicable decisions. 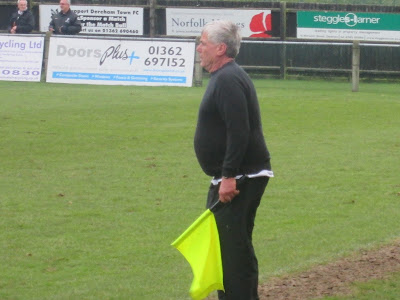 The second period saw more of the same and Harlow’s frustration was increased when prolific scorer Alex Read missed his second successive penalty. The game then took an unexpected turn when the pantomime villain was injured and replaced by one of the linesmen. This in turn led to a retired referee in the crowd running the line. Harlow equalised through Craig Pope and had chances to win the match. Will Viner in goal for Dereham was my man of the match, without his heroics Harlow would most likely have won this match. In the end, considering the events of this match, a draw could be deemed a positive result for Harlow. I enjoyed my visit to Aldiss Park, with the exception of two idiotic women with an enormous blanket, the locals are a friendly welcoming bunch. 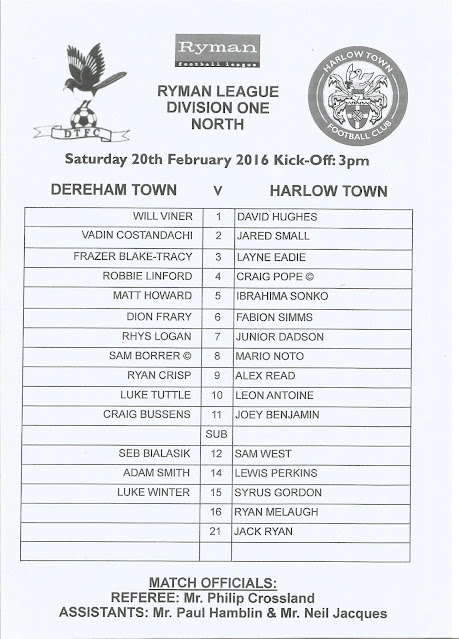 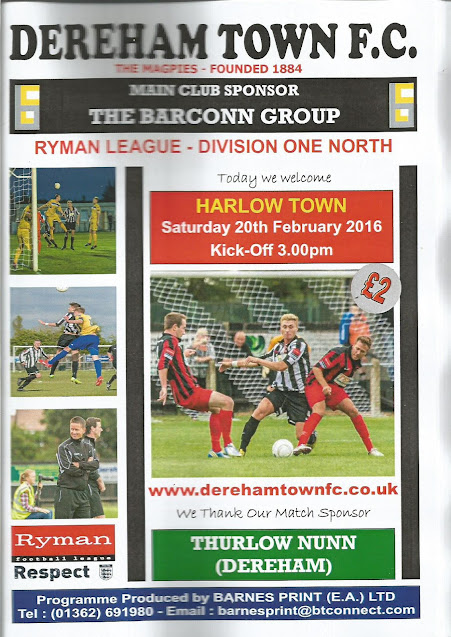