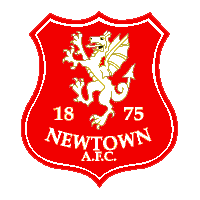 Newtown was founded at the end of the 13th century when Edward I of England commissioned Roger de Montgomerie to construct a centre for the hamlet of Llanfair-yng-Nghedewain. It was situated near the ford on the River Severn, below the Long Bridge and around the church of St Mary in Bettws Cedewain. The town grew in the 18th and 19th centuries around the textile and flannel industry, stimulated by the completion of the Montgomeryshire Canal. Newtown hosted the National Eisteddfod in 1965. Newtown is about 8 miles from the Wales-England border, in the narrow valley of the River Severn which restricts development north and south of the town. The town is best known as the birthplace of Robert Owen in 1771. The Montgomery Canal originally terminated in Newtown. Following its closure in 1944, the section in Newtown was sold and subsequently built on. Canal Road and Lower Canal Road in Newtown are named after it. 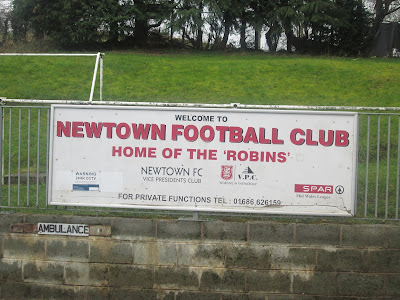 Newtown Association Football club was founded in 1875 as Newtown White Stars, and was one of the founder members of the Football Association of Wales. The club participated in the first ever Welsh Cup match on 13 October 1877 and won the competition in 1879. The club is believed to have merged with Newtown Excelsior to form the current Newtown AFC in time to be Welsh Cup finalists in 1885 and 1888. The club plays at Latham Park which can accommodate 5,000 spectators. For most of the years since the 1920s the club operated in the Mid-Wales League, or the Central Wales League as it was sometimes known, winning the championship in 1975–76, 1978–79, 1981–82, 1986–87 & 1987–88 and on the strength of this record, the club gained entry to the English league system in the Northern Premier League. In 1992 Newtown AFC moved to the Welsh Premier League are one of only three clubs that can claim unbroken membership since its formation. In 2014 Newtown became the 2nd Welsh Premier League club, to change their grass turf for a 3G pitch. 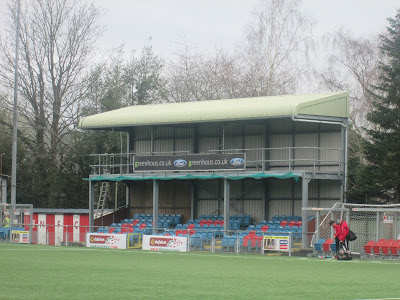 The 10:25 service from Birmingham New Street enabled me to reach Newtown just after mid-day. I made my way to Latham Park and was able to gain entry and take some photographs. Having participated in Europa League football this season, the ground will have had to have met certain criteria. A minimum amount of seating will have been a requirement and Latham Park boasts a total of five stands dotted around the venue. 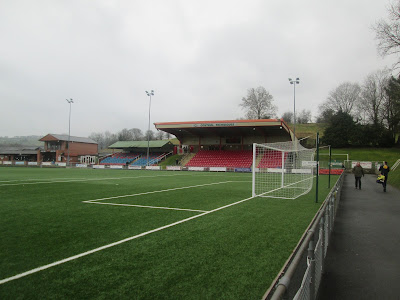 After taking my initial batch of photographs, I ventured to the town centre in search of some Welsh ale. At the Black Boy (J D Wetherspoon), I failed in this quest, but was still able to enjoy a pint of Beauty from Woods Shropshire Ales (4.2%) - A fusion of fruity hops give a lingering bitter aftertaste together with a well rounded maltiness. 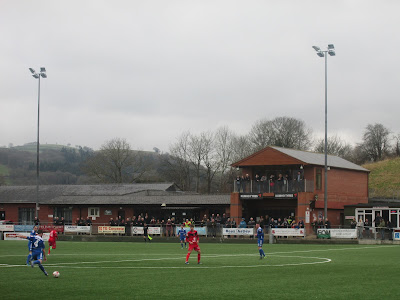 I made my way back to Latham Park in plenty of time for the match, which was just as well! With time to spare (or so I thought), I settled down in the clubhouse to watch some of the televised Norwich City v Manchester City match. It was at this point that I realised that the teams were already on the pitch - the match had been brought forward to a 14:00 kick off to facilitate anyone wanting to watch the England v Wales rugby match at Twickenham on TV. However, I still had time to finish my pint of the locally brewed Sunshine from Monty's Brewery (4.2%) - packed with floral and citrus aromas with a dry distinctive finish. 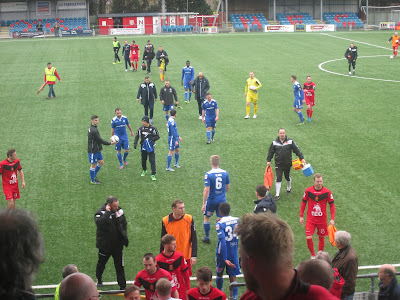 The match saw 6th placed Newtown host 5th placed Airbus UK Broughton and with only one point separating the teams, a close encounter was on the cards. The first half followed that script with a couple of chances at each end. However, after the break the visitors started to take control, eventually bagging three goals that produced an identical result to their earlier visit to Latham Park this season. 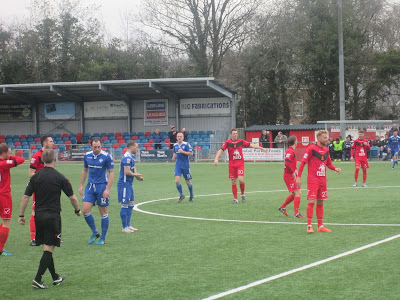 The early kick off allowed plenty of time to catch the 16:42 Birmingham International service, but even the regular 14:30 start would help achieve this for what is just less than a fifteen minute walk to the station. 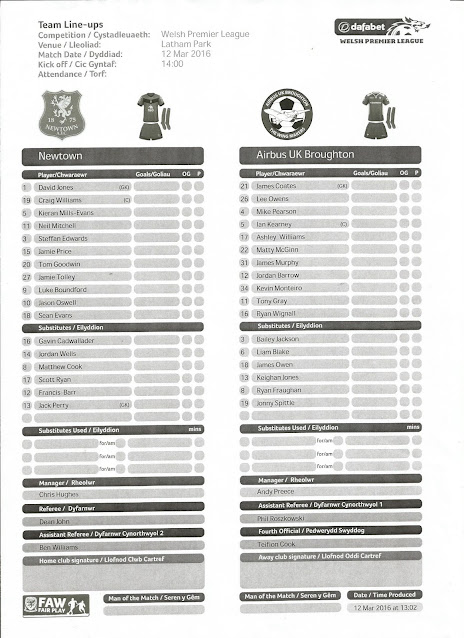 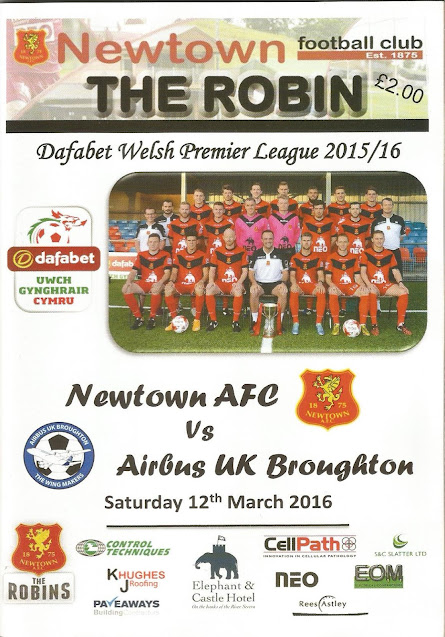