Turin is a city and an important business and cultural centre in northern Italy. It is the capital city of the Metropolitan City of Turin (an administrative division of Italy) and of the Piedmont region, and was the first capital city of Italy from 1861 to 1865. The city is located mainly on the western bank of the Po River, in front of Susa Valley, and is surrounded by the western Alpine arch and Superga Hill. In the 1st century BC, the Romans created a military camp (Castra Taurinorum), later dedicated to Augustus (Augusta Taurinorum). The typical Roman street grid can still be seen in the modern city, especially in the neighbourhood known as the Quadrilatero Romano (Roman Quadrilateral). Via Garibaldi traces the exact path of the Roman city's decumanus, which began at the Porta Decumani, later incorporated into the Castello or Palazzo Madama. The Porta Palatina, on the north side of the current city centre, is still preserved in a park near the Cathedral. Remains of the Roman-period theatre are preserved in the area of the Manica Nuova. Turin was not captured by the Allies until the end of Spring Offensive of 1945. By the time the vanguard of the armoured reconnaissance units of Brazilian Expeditionary Force reached the city, it was already freed by the Italian Partisans that had begun revolting against the Germans on 25 April 1945. Days later, troops from the US Army's 1st Armoured and 92nd Infantry Divisions came to substitute the Brazilians. 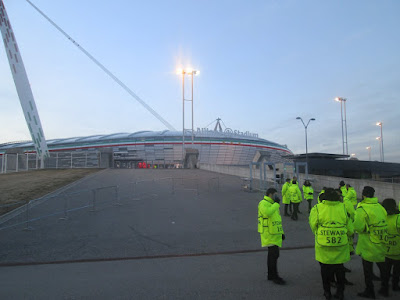 The football club was founded as Sport-Club Juventus in late 1897 by pupils from the Massimo D'Azeglio Lyceum school in Turin, but was renamed as Football Club Juventus two years later. The club joined the Italian Football Championship during 1900. In 1904, the businessman Ajmone-Marsan revived the finances of the football club Juventus, making it also possible to transfer the training field from piazza d'armi to the more appropriate Velodrome Umberto I. During this period, the team wore a pink and black kit. Juventus first won the league championship in 1905 while playing at their Velodrome Umberto I ground. By this time the club colours had changed to black and white stripes, inspired by Notts County. Under the management of Giovanni Trapattoni, the club won thirteen trophies in the ten years before 1986, including six league titles and five international titles, and became the first to win all three competitions organised by the Union of European Football Associations - the European Champions' Cup, Cup Winners' Cup and UEFA Cup. With successive triumphs in the 1984 European Super Cup and 1985 Intercontinental Cup, the club became the first and thus far only in the world to complete a clean sweep of all confederation trophies; an achievement that they revalidated with the title won in the 1999 UEFA Intertoto Cup after another successful era led by Marcello Lippi, becoming in addition the only professional Italian club to have won every ongoing honour available to the first team and organised by a national or international football association. 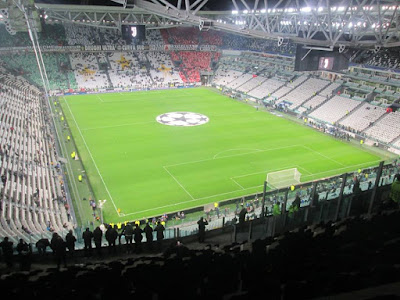 Juventus Stadium (commercially known as the Allianz Stadium) was built on the site of Juventus' and Torino's former home, the Stadio delle Alpi, and is one of only three club-owned football stadiums in Serie A, alongside Sassuolo's Mapei Stadium and Udinese's Stadio Friuli. It was opened at the start of the 2011–12 season and has a capacity of just over 41,000 spectators. 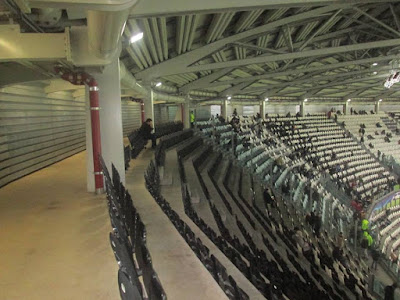 My outward journey the day before the match was from London Heathrow via Frankfurt. Connections were good and I arrived at my lodgings shortly before 3pm. I had stayed in Turin previously en route to Milan. On that occasion I had visited and enjoyed the beer at Birrificio Torino. It would have been a crime not to repeat the experience. Quality ales brewed on the premises enhanced a good evening in good company.

On the afternoon of the match I walked to the stadium, stopping off for refreshment at a couple of bars on the way. Arriving at the stadium a good two hours before kick-off, there was already a lot of activity with supporters arriving early. The majority of the Spurs fans would arrive later in a bus convoy from the city centre. On entering the stadium, it was a disappointment to see very limited refreshment and toilet facilities for the visiting supporters. For a relatively new build this is unnecessary but often typical on the continent. The view from the seating in the upper tier was good, as should be expected. 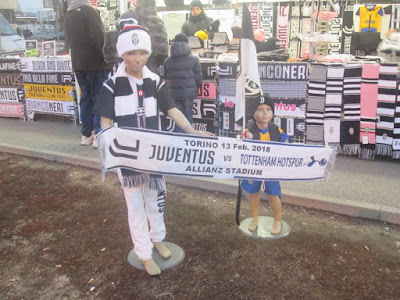 Tottenham Hotspur produced a brilliant comeback to draw after a disastrous start to the match.
Mauricio Pochettino's side was 2-0 down inside 10 minutes after Gonzalo Higuain followed up a volley with a penalty, awarded for a foul on Federico Bernardeschi. Harry Kane started the fightback after rounding Gianluigi Buffon following Dele Alli's threaded pass and Higuain then missed a penalty for the hosts with the last kick of the first half. Spurs dominated possession against the Italian champions and got their reward when Christian Eriksen's low free-kick evaded Buffon to level this first leg tie 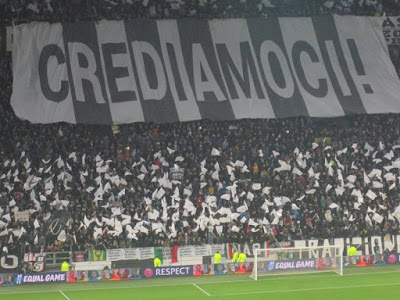 After the match, the visiting fans were kept in the stadium for around 45 minutes before boarding buses back to the centre. Rather parched at this point, it was good to consume some more quality ale at a branch of Birrificio La Piazza, conveniently located a few minutes' walk from my hotel. It is good to see and experience that Italy has continued to improve in respect of beer. 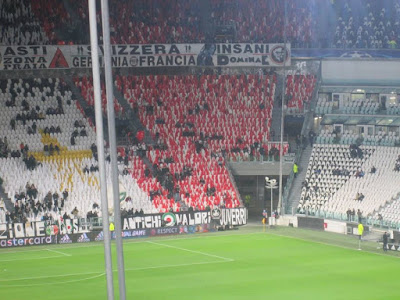 I opted to catch the train back to Turin Airport. Strangely, the terminus for this line is situated outside of the centre. With plenty of time to spare I walked to Dora station, spending some time at a nearby bar enjoying a custard croissant with cappuccino and chatting to locals about the match. My journey back to Heathrow was via Munich and I was also delighted with a lift home from the airport courtesy of Tom Cleave.