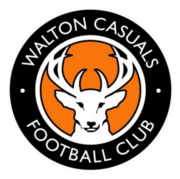 Walton-on-Thames is a market town on the south bank of the Thames in the Elmbridge borough of Surrey. The town itself consists mostly of affluent suburban streets, with a historic town centre of Celtic origin. It is one of the largest towns in the Elmbridge borough, alongside Weybridge. During World War I, troops from New Zealand were hospitalised in the No. 2 New Zealand General Hospital at Mount Felix House, which is now demolished except for its stable block and clock tower. They are remembered by a memorial in the cemetery, where those who died at Mount Felix are buried, and one in St Mary's Church where an annual service of remembrance is held. They are also remembered in the street name New Zealand Avenue, the Wellington Pub (formerly The Kiwi), and a small memorial in the Homebase car park. In World War II, owing largely to the proximity of important aircraft factories at nearby Brooklands, the town was bombed on various occasions by the Luftwaffe. 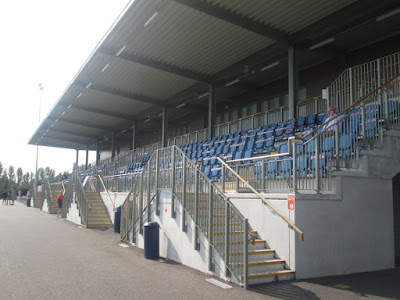 The football club joined the Surrey Intermediate League upon formation in 1948, remaining there until the league disbanded in 1965. A move to the Surrey Senior League lasted just two years before becoming founding members of the Suburban League. Walton Casuals won their first major honour in 1983 as champions of the Suburban League Southern Section. In 1992, the club turned semi-professional and entered the football pyramid by joining the Surrey Premier League. The Stags earned promotion to the Combined Counties Football League in 1995, and the Isthmian League 10 years later. The club moved into the Elmbridge Sports Hub – a £20 million sports complex development – for the 2017–18 season. In their first season at the new stadium, Walton secured a top six finish on goal difference and went on to win the play-offs. 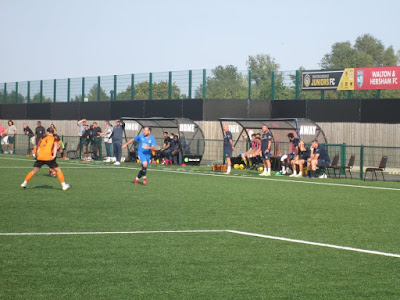 I visited the club’s former ground, Franklyn Road for a Combined Counties League match in 1996. On that occasion I walked from Walton-on-Thames station. This time, I opted for the slightly nearer Hersham Station, which is also the stop before Walton-on-Thames when travelling from London. I was able also able to take advantage of oyster fares as far as Surbiton. This was good as I had visited my office at Canary Wharf to empty my locker en-route and my journey via Stratford and Shadwell enabled me to reach Clapham Junction with relative ease. 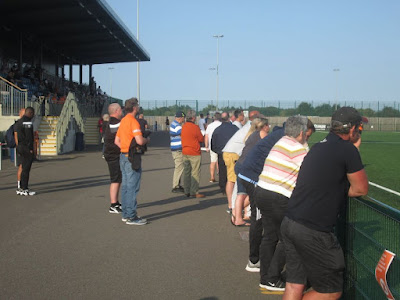 The 35 minute stroll to the ground was mainly through residential areas and I can report that I did not pass any public houses along the way. However, both Brian Watts and Adam Carne recommend The Weir pub, a short walk from the ground alongside the Thames. On arrival at the ground, it was evident that there is plenty of parking available, which is not surprising as the facility serves a number of sporting activities. Entry to the ground was efficient considering the Covid restrictions and my temperature check was enhanced with the purchase of a 50/50 draw ticket (I didn’t win). 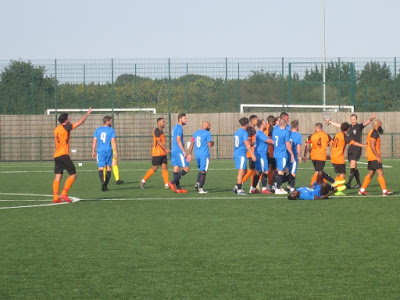 I watched the first half of the match from the elevated seating of the covered stand. This afforded a good view of proceedings, after which visitors Hartley Wintney led by a one-goal margin at the break, courtesy of a converted penalty. In truth they should have been out of sight following a number of other chances. 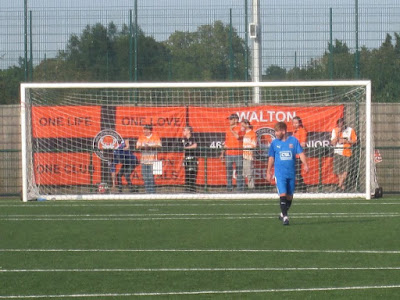 I stood for the second half and watched the majority of the play from behind the goal that the visitors were attacking. Walton Casuals were much improved in the second half and their equalising goal also came from the penalty spot. Both sides contributed to a sometimes heated affair that the referee just about managed to keep a lid on. This was the first league match of the season for these teams who will both be glad to have earned their first point. I enjoyed the match and came away with the feeling that both sides could have a good season once they settle into a rhythm. 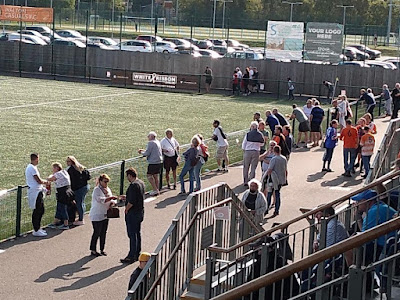 With the exception of the stand, there are no other specific spectator facilities. There is flat hardstanding around the ground, which is smart in appearance. However, the ground is somewhat exposed to the elements and even when under cover, the wind gusting in can be quite strong. It was a shame that the full refreshment facilities were not open due to the restrictions.  Despite the match not ending until just before 17:00, this still left plenty of time to amble back to Hersham Station for the 17:49 London Waterloo service. 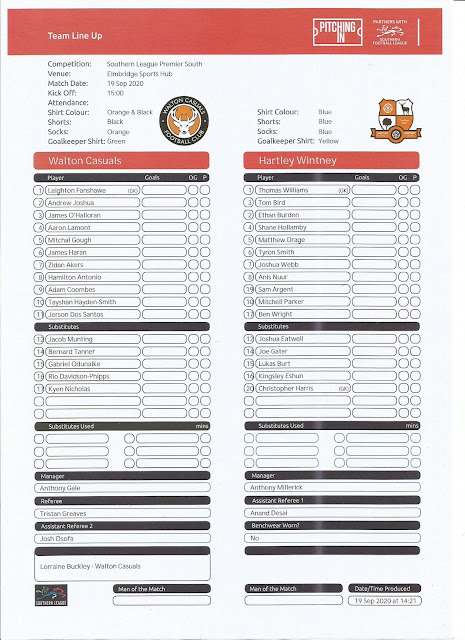