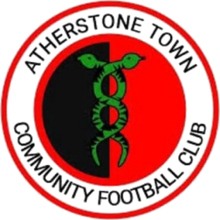 Atherstone is a market town and civil parish in North Warwickshire. It lies between the larger towns of Tamworth and Nuneaton and contains the administrative offices of North Warwickshire Borough Council. In Tudor times, Atherstone was a thriving commercial centre for weaving and cloth making. The town's favourable location laid out as a long ‘ribbon development’ along Watling Street, ensured its growth as a market town. While it remained an agricultural settlement in medieval times, attempts were made to encourage merchants and traders through the creation of burgage plots, a type of land tenure that provided them with special privileges. An annual tradition in Atherstone is the Shrove Tuesday Ball Game played on a public highway with large crowds. The game celebrated its 800th anniversary in 1999. The game is a complete free-for-all played along Watling Street at the point where it forms the main street of Atherstone town. The ball is decorated with red, white and blue ribbons that are exchanged for money by whoever is able to obtain one and is made of thick leather to make it too heavy to kick far. The match starts at 3:00pm when the ball is thrown from the window of Barclays Bank and continues until about 5:00pm. 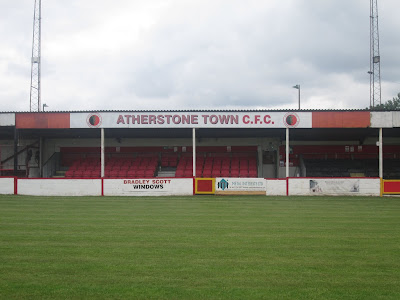 The original Atherstone Town club was formed in 1887. They reached the semi-finals of the FA Amateur Cup in 1907–08, losing 3–0 to Stockton. The following season saw them reach the semi-final stage again, this time losing 3–0 to Clapton. After playing in several local leagues, they joined the Birmingham Combination in 1911, and were runners-up in their first season in the league. Via the West Midlands (Regional) League, the club reached the Southern League and was playing in the Premier Division until folding in 1979. The club was immediately reformed as Atherstone United, taking the reserve team's place in Division One of the West Midlands (Regional) League. This incarnation also reached the Southern League before also folding midway through the 2003–04 season. The club was then reformed under the name Atherstone Town, joining Division One of the Midland Combination for the 2004–05 season. After winning Division One and the President's Cup in their first season, they were Premier Division champions and League Cup winners in 2005–06 and were promoted to the Midland Alliance. The club were Midland Alliance champions in 2007–08, earning promotion to Division One Midlands of the Southern League. Subsequent relegations and restructuring have resulted in the club currently competing in The Midland League Division One. 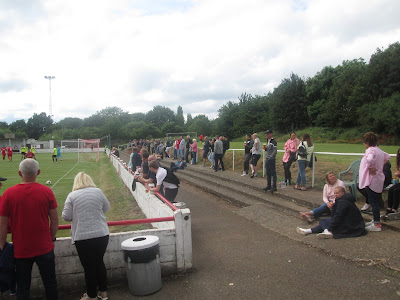 I was fortunate to be offered a lift to Atherstone (much appreciated Phil) and the journey via Cockfosters (where we picked up the Fridge Magnet) took a little over two hours. Earlier research indicated that Sheepy Road was an old-fashioned venue and this was confirmed immediately on arrival. One notable observation was that there are five separate floodlight pylons positioned along each side of the ground. From memory, I’m not sure that I have seen that elsewhere. 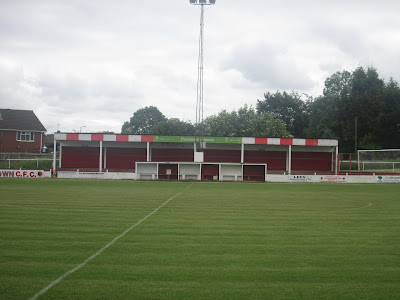 The ground oozes history and I should imagine that there have been some memorable matches played in front of large crowds over the years. We were allowed to park behind the main stand. This stand is covered and contains a mixture of seating and standing accommodation. Toilet facilities are located at the rear, as is the Director’s Lounge. The changing rooms are also located on this side of the ground. 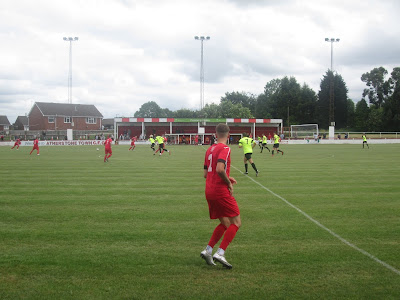 On the opposite side of the ground is a covered standing area which sits immediately behind the dug outs. Also close to this area is a refreshment hut (closed for this match) and a clubhouse selling refreshment and souvenirs (scarves and badges). Both ends of the ground are open and are terraced, providing an excellent vantage point to watch the match. It is a real shame that many new built non-league stadiums do not factor this in at the planning stage. 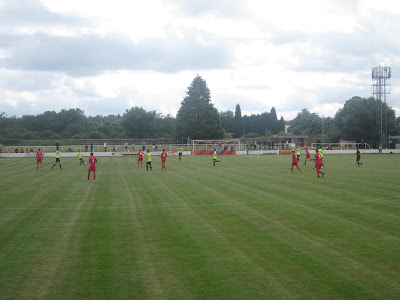 Earlier research also revealed that the Angel Ale House (North Warwickshire CAMRA pub of the year 2019) is less than ten minutes walking distance from the stadium. At this fine establishment I was able to enjoy Ground Zero (4.8%) from Norton Brewery in Essington Staffordshire – a refreshing pale ale. I followed this with Black Sun (5.0%) from Potbelly Brewery in Kettering - A blend of two award winning beers, Beijing Black and Crazy Daze. Fine refreshment and a recommended venue lying a couple of hundred yards from the historic High Street. 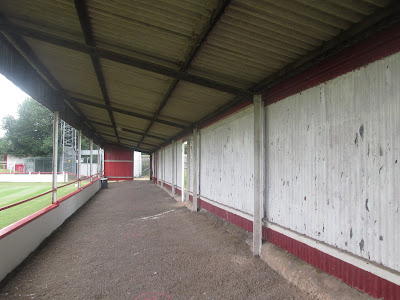 This start to the 2021-22 season is earlier than usual, but considering the disruption caused to the beautiful game over the last couple of seasons, just getting out there playing must be a relief to many. The 5-0 victory for the home side reflects their dominance in a match played against opponents from the lower division. We were treated to some good football and I hope the workout benefited both sides. Along with my fellow travellers I was glad to visit Sheepy Road, the club is extremely friendly and this was underlined by the invitation to stand in for the Earlswood Town officials for Coffee and biscuits at half time!

Attendance: ?
Admission: £5:00/£3:00
Programme: Not issued
For a full set of photographs click here