Pitstone is a village and civil parish in the Aylesbury Vale district of Buckinghamshire. It is atthe end of the foot of the central range of theChiltern Hills, centred 6 miles east of Aylesbury and 5 miles south of Leighton Buzzard. The village name is Anglo Saxon in origin and means 'Picel's thorn tree. In 1290 King Edward I spent Christmas at Pitstone at the estate of the abbey at Ashridge. His stay caused great inconvenience to the local inhabitants of the village, who were legally obliged to keep the king and his court. Pitstone directly adjoins the village of Ivinghoe, the two villages share some facilities. For a village, Ivinghoe has an unusual feature: a town hall, rather than a village hall. The village has some fine examples of Tudor architecture, particularly around the village green, with 28 buildings marked as listed or significent. 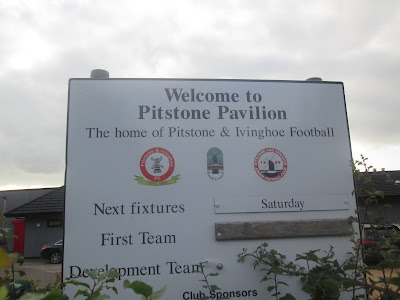 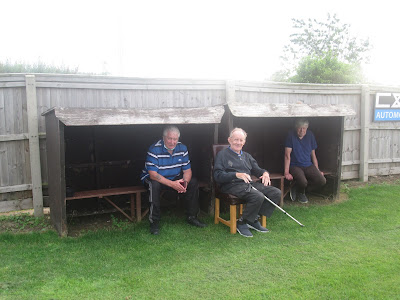 I was fortunate to be offered a lift to Pitstone (much appreciated Phil) and the journey took a little around 45 minutes with the M25 on good behaviour. Before heading for the ground, following some good research by our driver, we visited the Red Lion public house in the neighbouring village of Marsworth. In a delightful rural setting this Pieman enjoyed Side Pocket For a Toad (3.6%) from Tring Brewery followed by a pint of Roasted Nuts from Rebellion Brewery (Marlow). At 4.6%, this is “a deep ruby, complex and flavoursome beer, packed with intense and distinctive malt and hop character” – very nice it was too. Due to the pandemic I ordered the beer by text and it is to the credit of the bar staff that predictive text on my phone did not result in me receiving rotated nuts instead! 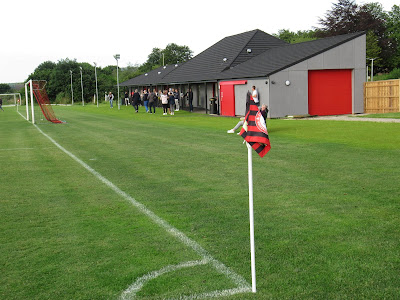 From said pub it took around twenty-five minutes to walk to Pitstone Pavilion and there is a roadside footpath (just about) covering the route. There is a decent sized car park adjacent to the very new pavilion. This building is very impressive for a club playing at this level and is a testament to the hard work put in over recent years. There is even a pay turnstile. The building contains a function room and a refreshment hatch, along with the changing rooms. The ground is fully enclosed although currently there is no railing around the perimeter of the playing area. I understand that floodlights are on the agenda for future ground enhancement. 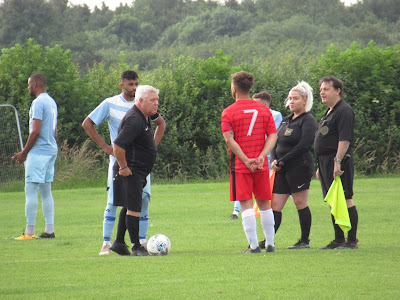 The original dugouts from the previous era, when the club played at Pitstone Recreation Ground, are now resident at this venue and are a quirky reminder of the past. Some “senior” supporters use these as a viewing area and were very welcoming in conversation with this Pieman. I guess when raining these structures are used to provide shelter as would the overhang from the pavilion. 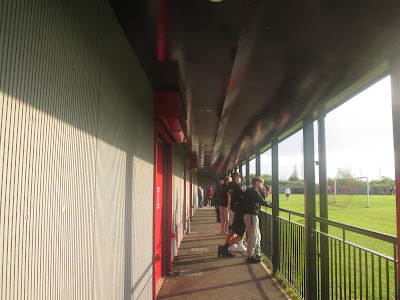 Visitors Leighton Town play three levels above the home side and early exchanges showed as much. However, Pitstone gradually played their way into the match and an even first half ended goalless. The second period saw a couple of early goals for the visitors but the hosts again found their feet and at times took the game to their higher league opponents, missing a few opportunities to get on the scoresheet. Despite the end result, Pitstone should be pleased with their performance. 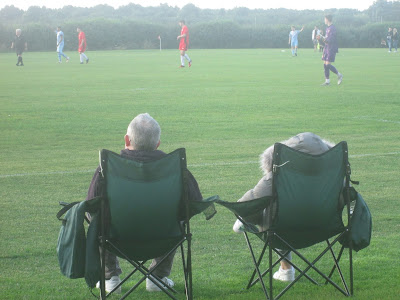 This venue is probably not the easiest to reach by public transport. Ironically, the main West Coast railway line from London Euston runs within 100 yards of the ground. We were treated to the sight of a steam train (just the steam really) heading back to Euston late in the second half. A delightful place to visit and a swift journey home was enjoyed.