Shefford is a town located in Central Bedfordshire. The name Shefford is derived from sheep-ford because there had been a sheep market and ford crossings over the two rivers that run through the town. The River Flit runs from Flitwick and joins the River Ivel on the edge of Shefford. The Ivel eventually joins the River Great Ouse just north of Sandy. During World War II, an entire Jewish children's community came to Shefford, as 500 pupils from Judith Grunfeld's school were billeted in and around the town. The school was moved in 1939 and remained in Shefford until 1945. This was part of 2Operation Pied Piper" where schools were moved in anticipation of wartime bombing. Campton is a neighbouring village and is located to the west of Shefford. 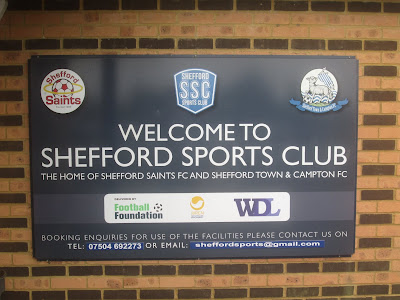 The football club was originally formed in 1910 as Shefford Town, their first successful period came in the 1950s: starting in 1949–50, the team won two South Midlands League championships and three Beds Senior Cups within five seasons. Subsequently, the club finished as runners-up in the Parthenon League, and won the United Counties League title in 1960–61. Shefford would not match these achievements until the early 1980s, when the club was promoted from the South Midlands League's second tier in 1982–83 and won the league title a year later. Following relegation in 1990, Shefford Town folded in 1994. The town remained without a senior football team until 2009, when the club was reformed. In 2010 Shefford Town merged with near neighbours Campton. The club has had success both on and off the pitch in recent years since its reformation, the club were crowned Bedfordshire County Premier Division Winners in 2011–12, 2017–18 and 2018–19. In 2019 the club was promoted to the Spartan South Midlands League. 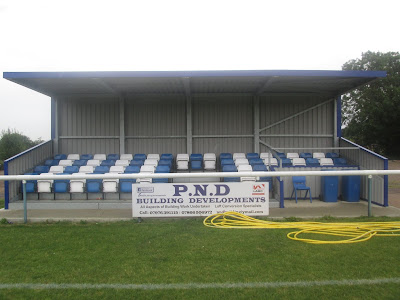 I was fortunate to be offered a lift to Shefford Sports Club, which is by far the better bet with public transport options being limited. The journey via Buntingford and Baldock taking around fifty minutes. With time to spare before the football match, the opportunity arose to visit the Engineers Arms at neighbouring Henlow. This fine establishment is renowned for fine real ales and a superb collection of sporting memorabilia. 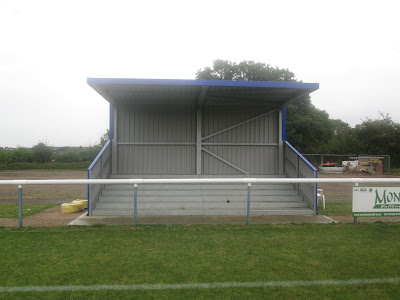 For research purposes, I enjoyed a decent pint of Gwenith Du (4.0%) from Tomas & Lilford brewery at Cowbridge. This Welsh stout hit the spot and set me up nicely for a pint of Toto (4.0%) from the more local Tring brewery – “A classic style with a modern twist: notes of biscuit and caramel finish with piney bitterness from old school US hops”. Once again, the Tring underlined its quality with this superb brew. 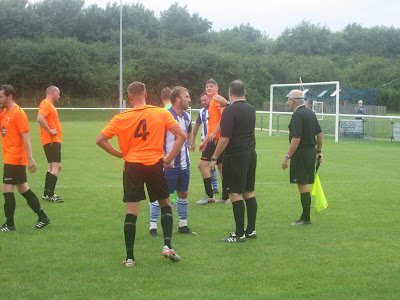 On arrival at this newish venue, entry to the ground is facilitated by payment at a shed on the approach road. This road also leads to a new housing development which is emerging against the Bedfordshire skyline. A large car park is adjacent to an impressive clubhouse building, which contains the changing facilities and a decent sized function room with a licensed bar. Spectator accommodation at the ground is made up of two covered stands one seated and one terraced (the latter I used during a first half downpour). The only other furniture at this fully railed off ground, being the dugouts on the opposite side of the pitch. 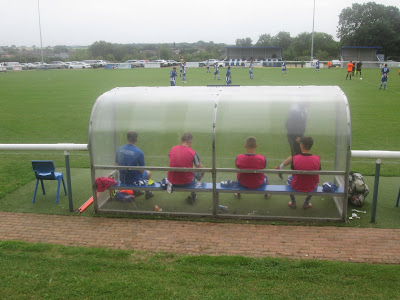 The match was fairly even for the first quarter of an hour, but gradually the home side began to get on top. It was a surprise that they were unable to turn their dominance into a lead and at the break I was wondering if I would be enduring my first 0-0 of the 2021-22 season. I need not have been concerned as the second half saw Shefford continue to take the game to their visitors. 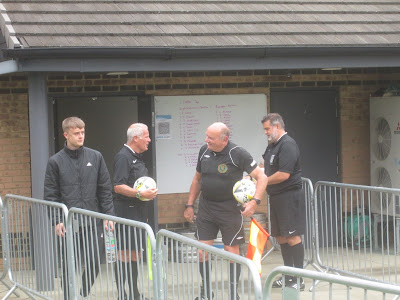 The final score of 4-0 does not truly reflect the one-way traffic of the second period and the hosts will look back at many other chances created, some of which seemed easier to convert than miss. A red card for a Rushden defender will have helped their cause, in a match with plenty of niggle between the two sets of players. The journey home was swift and I am now able to reflect on not just the visit to Shefford Sports Club, but also to the Engineers Arms!

Attendance: 105
Admission: £5:00
Programme: Not issued
For a full set of photographs click here