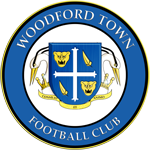 Woodford is a town in East London, located in Greater London and Essex. It is divided into the neighbourhoods of Woodford Green, Woodford Bridge, Woodford Wells and South Woodford. The town is situated 9.5 miles northeast of Charing Cross. As part of the suburban growth of London at the turn of the 20th century, Woodford significantly increased in poulation, becoming a municile borough with neighbouring Wanstead in 1937 and forming part of the London Borough of Redbridge, a local government district of Greater London, in 1965. Woodford, as part of Epping Forest was one of the last places in London where medieval Commoner's rights persisted - with local farmers being allowed to graze their cattle on the common land. These rights were protected by sections 14 and 15 of the Byelaws passed by the Conservators of Epping Forest. Even late into the 20th century cattle were allowed to roam freely on the forest ground (Forest, in this instance being the term applying to the district rather than that area with trees). The beginnings of the actual modern suburbanisation of Woodford, however, can be traced to the opening (in 1856) of the Eastern Counties Railway Line from Stratford to Loughton on which Woodford became accessible by two stations, at Snakes Lane and George Lane. 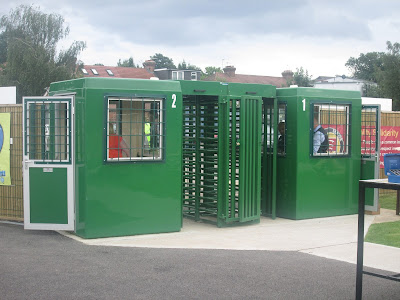 There is some confusion over the history of the current incarnation of Woodford Town Football Club. Wikipedia indicates that the name is the latest in the chain involving Mauritius Sports, Haringey & Waltham Development, Greenhouse London and Greenhouse Sports. However, An alternative account is that provided by the excellent Football Club History Database. That version states that the club mutated from Goffs Oak to Bush Hill Rangers to Woodford Town in 2015. What is clearer is that the original club bearing the Woodford Town name joined the London League in 1945. Following this, the club played in the following leagues: Metropolitan, Southern Athenian and Essex Senior before being voted out of the Essex Senior League in 2003. Jimmy Greaves being a notable former player. In recent seasons the club had played home matches at Barrows Farm (Harlow Town FC). 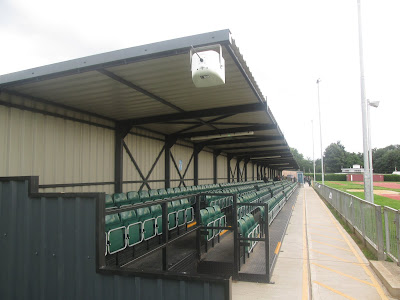 This Pieman never got to sample the delights of Snakes Lane, the former Woodford Town ground. Therefore, it was fitting that during the walk from Woodford Station, the floodlight pylons of the former venue are still visible. The walk from the station to Ashton Playing Fields Athletics Track takes around 15 minutes and once you have walked beneath the M11, you reach the entrance to the ground. I had seen this venue many times from the motorway in the past. The running track used by Woodford Green Athletics Club was a prominent sight. These days that view is blocked by trees. 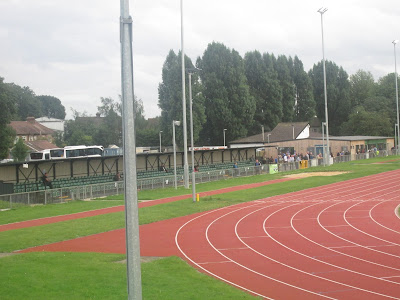 This was the long awaited first home match for Woodford Town at this venue and as expected a bumper crowd was in attendance. The official crowd was announced as 822, although this did seem a bit high. The vast majority were neutrals and some of the groundhoppers fit the celebrity description as they sought their Woodford tick. The officials were well prepared for the invasion and 200 programmes had been printed for the occasion. 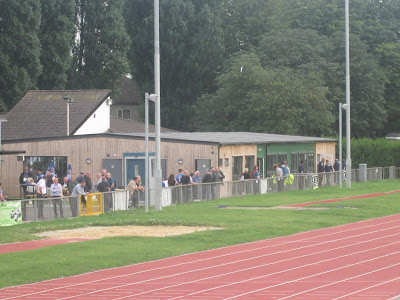 There is a spacious car park, which although full, would be more than adequate on a normal match day. An impressive turnstile block has been erected and it is clear to the investment that has been made in getting the stadium to the right standard. All the spectator facilities are located on one side of the pitch. These include a covered 350 seat stand (full on this occasion) and an impressive clubhouse containing a boardroom and large function room with a licensed bar. 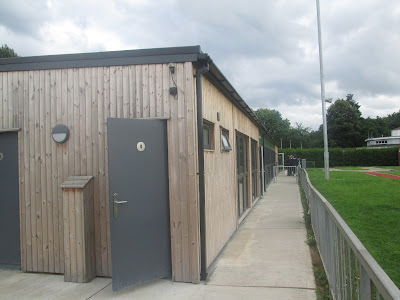 The sparklingly clean toilet facilities are located at the end of the clubhouse. There were picnic tables between the clubhouse and a smart looking refreshment van was also in situ, not surprisingly doing a good trade as groundhoppers get hungry and burn off calories (well some do). Unfortunately, stadiums with running tracks rarely afford the best views. Some attendees took advantage of a grass slope in the corner at one of the ends offering a raised vantage point. 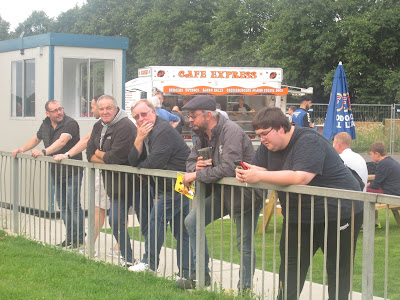 Visitors Stansted were worthy winners in a match that did not really live up to the occasion, despite the efforts of the players. In the first period, the visitors twice hit the post when it appeared easier to score. Hopefully Woodford Town will quickly settle into their new surroundings. Their enthusiastic committee and singers will do their best to make this happen. Although this match kicked off later than the advertised 19:45, I was given a lift back to the station and via Stratford was back at Cheshunt before 23:00. 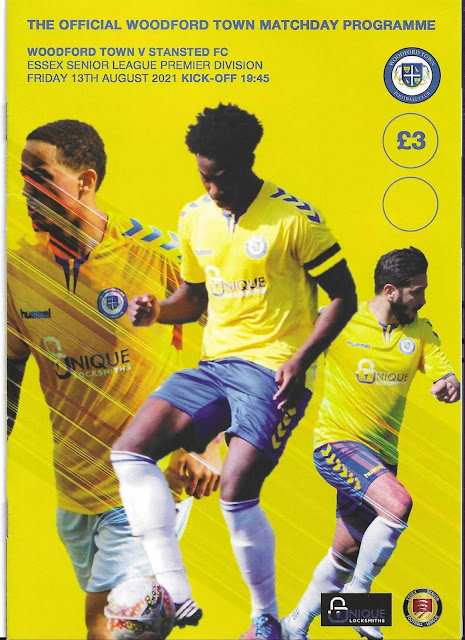