Irchester is a village and civil parish in Northamptonshire. It is situated two miles south-west of Rushden and the same distance south-east of Wellingborough. Chester Farm is situated a mile to the north of the village and is a significant site of archaeological importance. The site preserves an area containing a wide range of historic features spanning several thousand years. This scheduled monument is protected by law. 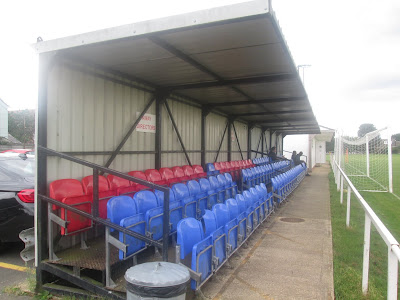 The football club was established as Irchester Excelsior in 1883, before being renamed as Irchester United in 1885. The club joined the Northamptonshire League in 1896, but soon left after finishing bottom in 1896/97. Spells in the Rushden & District League and the United Counties League (UCL) were to follow. The UCL Division One Championship was won in 2010 and promotion to the Premier Division was secured, followed by subsequent relegation three seasons later, In 2021, Irchester United were transferred to the Spartan South Midlands League, Division One. 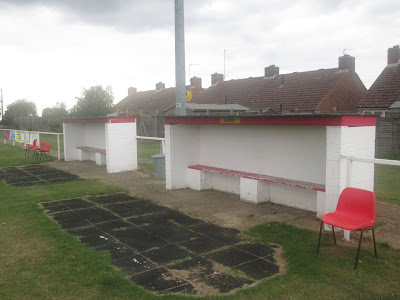 I was fortunate to be offered a lift to Alfred Street (much appreciated Phil) and the journey from Cheshunt took around an hour and a quarter. As with many rural venues, this facility is shared with cricket. The demands of the summer sport often mean that the club cannot play home matches early in the season. This was to be the first home match of the 2021/22 season. There are six floodlight pylons, five of which would most likely not interfere with the layout for cricket, although this is perhaps not the only conflicting issue. 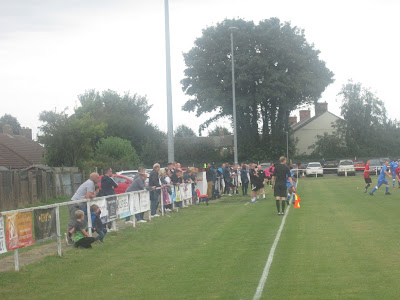 The only spectating facility at the ground is a covered three rowed seated stand. This structure is behind one of the goals and backs on to the car park. The stand contains around 60 seats. In adverse weather, there is additional cover in the form of an overhang in front of the changing rooms building situated next to the stand. There is a smart clubhouse at the far end of the car park (additional parking was available pitch-side) with a licensed bar and a hatch from where to purchase hot drinks. Admission money was collected during the match by a club official. 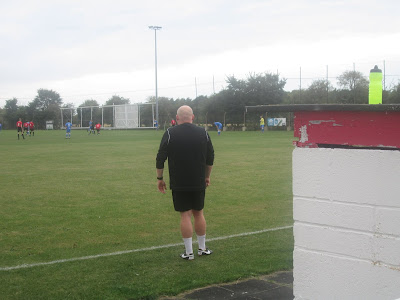 This was my 3rd FA Vase match in less than 48 hours, following visits to St Margaretsbury on the Friday and Balham on the Saturday. The home side have been struggling this season and not being able to use Alfred Street will most likely have had an effect. That said I saw them the previous Tuesday at Letchworth Garden City Eagles, where they suffered a narrow defeat and in my opinion were unfortunate with some of the decisions that went against them. Hillingdon Borough, were to provide a much sterner test despite starting the match with only ten players. 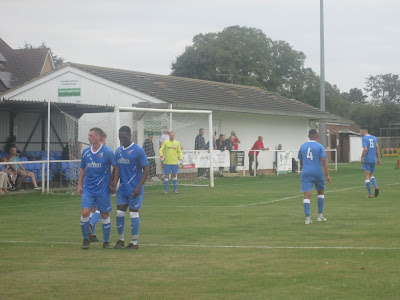 The visitors edged a fairly even first period and were rewarded with a fine early strike which was celebrated by the neutral hoppers from Colchester to my left, who had somehow managed to see two 0-0s already this season! A second goal, this time sliced in the net by an Irchester defender doubled the lead and at this point it was hard to see how the home side could recover. They themselves had fashioned a couple of chances but so had the rampant visitors. 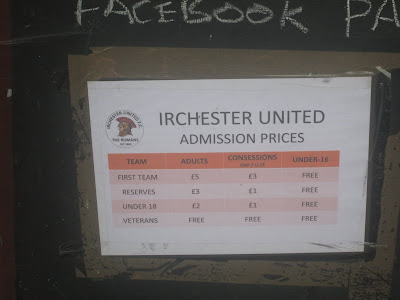 The second period saw the home side get a goal back and we were set for a good entertaining encounter. In truth we got just that, but strangely not in an expected way. A Hillingdon Borough player was sent off following a clash with the home keeper. This appeared to inspire the visitors, who dominated from that point scoring three further goals to progress to the next round. A fellow enthusiast pointed out that at both ends of the match the visitors had scored whilst only having ten players on the field! Hopefully Irchester United can soon get their season back on track, a friendly club that I enjoyed visiting.